Sep-2009 traffic results at the three major European airports - London Heathrow, Paris Charles De Gaulle and Frankfurt International – indicate signs of a gradual stabilisation in traffic, in terms of both passenger and cargo volumes. However, a sustainable recovery is not yet guaranteed, with operating conditions remaining tough, which has led the Association of European Airlines (AEA) to call for the further suspension of 'use-it-or-lose-it" slot rules at airports over the coming Winter.

Sep-2009 traffic at the key European hubs remained in negative territory. Heathrow performed relatively better than its rivals, with passenger traffic falling only marginally, by 0.3% to 5.8 million. Paris CDG traffic dropped 4.0% to 7.1 million passengers, while Frankfurt was down more sharply, with Sep-2009 traffic falling 4.7% year-on-year to 4.6 million after almost returning to positive territory in Aug-2009. All the airports are coming off contractions of around 3-4% last year, so Heathrow is clearly recovering better than Frankfurt or Paris. 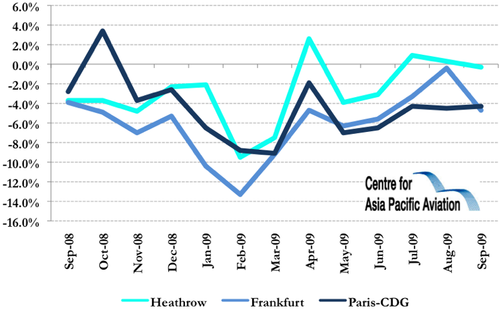 Between them, London Heathrow, Paris Charles De Gaulle and Frankfurt International airports handled more than 15 million passengers last month. However, passenger traffic at the three airports for the year to date is below 2007 levels. 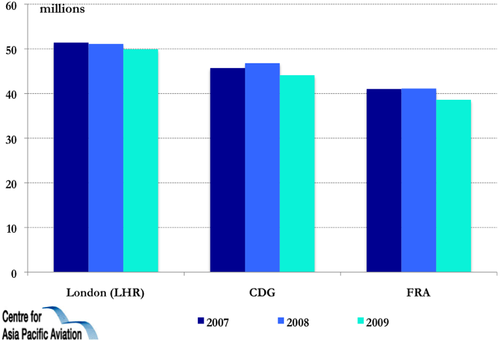 “The recovery process has taken off”: Fraport

According to Fraport Executive Board Chairman, Dr Stefan Schulte, “the decline in passenger traffic is shrinking month by month". He added, “following a drop of more than 13% at the beginning of the year, this is indeed an overall positive development – the recovery process has taken off."

Fraport stated the Frankfurt Airport hub handled 4.6 million passengers in Sep-2009, for a 4.7% year-on-year reduction. According to Fraport, the passenger figures for the month “confirm our 2009 full-year forecast of only a 5-6% drop in passenger traffic at Frankfurt". 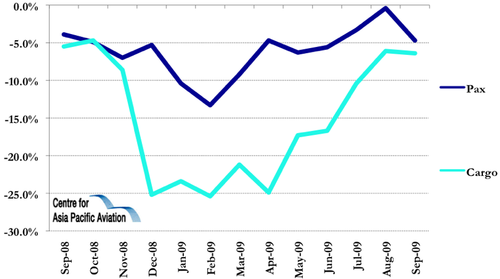 “Conditions remain challenging” but “some signs of recovery”: BAA

Combined traffic among BAA’s seven UK airports saw a 2.6% reduction in total passengers to 13.0 million in the month, a similar result to that in Jul-2009 and Aug-2009, with BAA CEO, Colin Matthews, warning that “conditions remain challenging for the industry”.

However, he stated that “recent figures suggest that while underlying market conditions remain soft, there are some signs of recovery”. 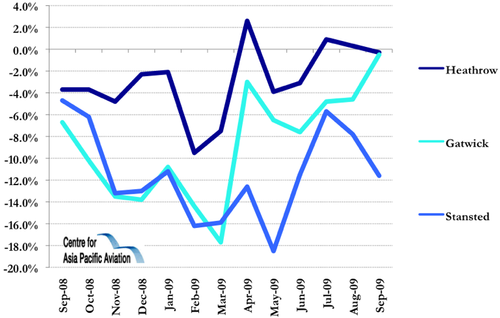 Heathrow Airport handled 5.8 million passengers in Sep-2009, a 0.3% year-on-year reduction, after the busiest August ever for the airport (and a year-on-year increase of 0.3%). According to BAA CEO, Colin Matthews, “Heathrow continues to perform well in its market”, with the airport experiencing “strong-long-haul performance on routes to India and the Middle East”.

In further positive news for BAA, London Gatwick recorded its best traffic performance since May-2008, with “encouraging” passenger numbers in Sep-2009, which fell by only 0.5%. The airport also recorded “strong growth” in important domestic and European scheduled markets (+5.8% and 9.8%, respectively). According to Mr Matthews, “at Gatwick there are encouraging signs of growth, particularly in the European scheduled business and the overall numbers around the group appear to be improving”.

In Scotland, Edinburgh Airport experienced a sixth consecutive month of passenger number growth (+3.8% year-on-year in Aug-2009), fuelled by new low-cost scheduled services to Europe, and to become the only Scottish Airport to experienced passenger growth. 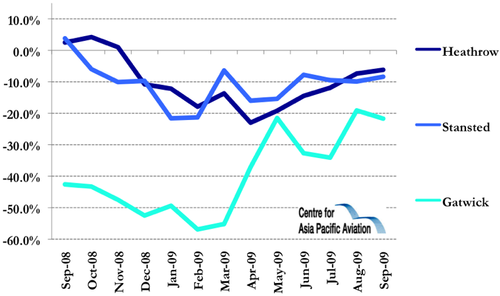 Among the smaller European hub airports, it appears that, in most cases (with the exception of Zurich and Moscow) that the decline in passenger traffic has continued, although the decline appears to be lessening every month.  Of the selected European airports, only Dublin reported a double-digit contraction in passenger numbers in the month.