Singapore Airlines (SIA) medium/long-haul low-cost subsidiary Scoot is preparing to begin operating 787-9s in 375-seat two-class configuration from late 2014. The carrier plans to quickly phase out its current fleet of six 777-200s, all of which will be replaced with 787s by mid 2015 with some expected to be transferred to planned Bangkok-based sister carrier NokScoot.

The transition to 787s will be an important development for Scoot as they will usher in significant efficiency improvements. Scoot has 10 787-9s on order along with 10 787-8s, which will be delivered from mid-2015. Scoot plans to configure its 787-8s with about 330 seats, giving the carrier the flexibility to use a smaller aircraft on its thinner routes.

Scoot is taking a hiatus from growth in 2014 but it will be a year of significant milestones as it takes its first 787 and launches its new joint venture in Thailand. Rapid growth will return in 2015 as Scoot plans to increase the size of its Singapore-based fleet by at least 50%.

As CAPA previously reported, Air NZ is configuring its 787-9s with 302 seats, including 263 in economy, 21 in premium economy and 18 in business class. Scoot announced at a 10-Feb-2014 press conference in Singapore that it has settled on a 375-seat configuration, including 35 business class and 340 economy seats.

Scoot’s original fleet of five 777-200s are configured with 402 seats, including 370 economy seats and 32 business class seats. Scoot also operates one 777-200 in a less dense configuration with 293 economy and 30 business class seats. As CAPA previously reported, this is considered a temporary aircraft and was kept in SIA configuration while the initial five 777-200s were reconfigured.

Scoot’s 787 economy and business class seats will have the same specifications as the seats on the original five 777-200s, which has a 3x4x3 layout in economy with mostly 31in pitch and a 2x4x2 layout in business with 38in pitch. But there will be a switch in seat vendors with TIMCO supplying the premium seats on the 787 and Weber providing the economy seats. On the 777 ZIM was the seat supplier for both cabins.

The ScootBiz cabin in the 787 will offer leather seats with a 38in pitch and 7in recline in 2x3x2 configuration. ScootBiz is marketed as a premium economy like product at the price of legacy economy. Meals, drinks, in-flight entertainment and checked bags are included with ScootBiz tickets. 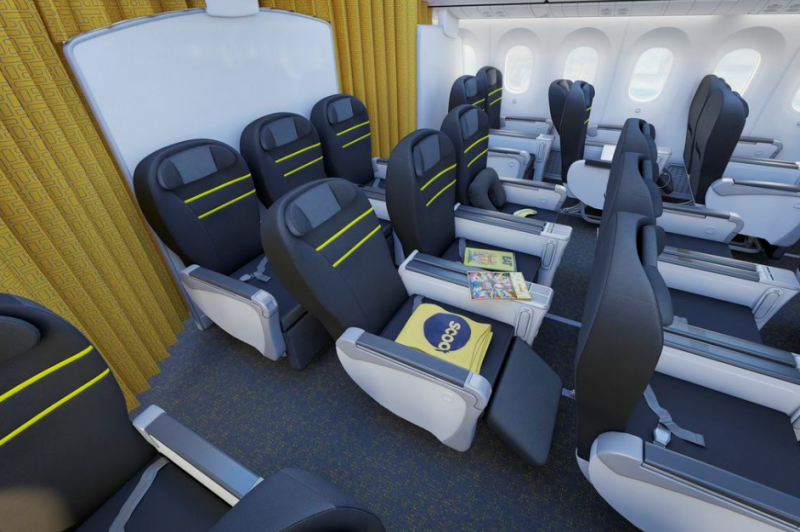 The economy cabin on the 787 will offer seats in 3x3x3 configuration, mostly with 31in pitch although some extra legroom seats will be offered with up to 34in pitch. Scoot will retain its Scootin Silence quiet zone, which on the 787 will include the 45 seats behind ScootBiz and only be available to passengers aged above 12. Scoot also plans to offer an option to buy an adjacent empty seat, a product it will roll out within the next few months initially on the 777 called MaxYourSpace. 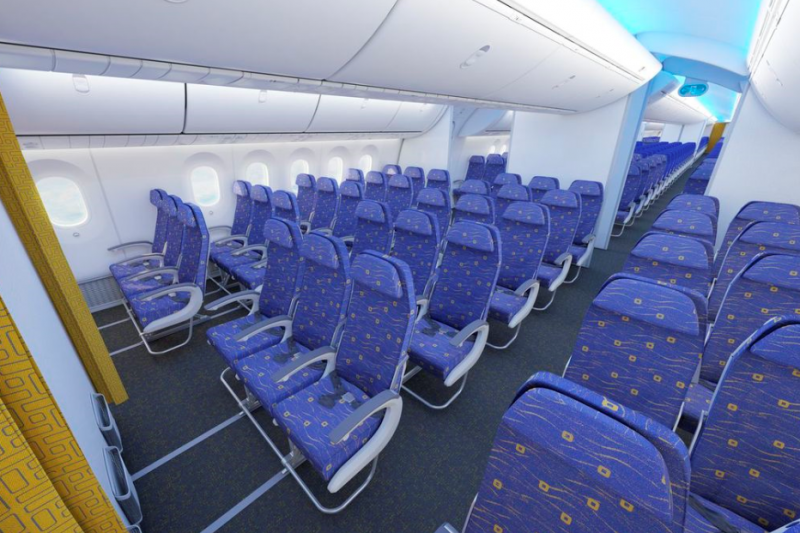 One significant difference with the seats on the 787 will be the addition of in-seat power supply, which will be offered across both cabins. There will be no seatback or drop down video monitors. As is the case with the 777, wifi and downloadable in-flight entertainment will be offered.

In the business cabin, tablets are provided free of charge. Gogo is the wireless supplier for Scoot in the 777 while Panasonic will be the supplier in the 787.

Scoot CEO Campbell Wilson says the 787 will initially be operated on Scoot’s services to Australia, Japan and Taiwan. Scoot currently serves Tokyo Narita via Taipei with one daily frequency. It has three destinations in Australia, with Sydney served daily and Gold Coast and Perth served five times per week.

Switching to the 787-9 should enable Scoot to improve load factor as the aircraft has 7% fewer seats than the 777-200, which is generally viewed as too large and heavy for low-cost operations. More significantly, the carrier expects to achieve a 20% per seat fuel reduction on the 787-9 compared to the 777-200. Fuel accounts for about half of Scoot’s total costs.

Mr Wilson promises to pass on the savings to consumers in the form of lower fares. But with Scoot fares already very low he acknowledges the carrier will look to pocket some of the difference.

Scoot, which launched services in mid-2012, has not yet reached break-even. But the business plan always envisioned losses in the initial years and it quickly became clear that profits were not possible with the 777, which was always seen as an interim aircraft.

While profits are not expected in at least the short term, Mr Campbell says the carrier is on track in its business plan and is confident in its business model. “Clearly it’s a long-term proposition,” he says, pointing out it was several years before Singapore’s short-haul LCCs started to turn a profit.

Scoot has not provided any data on its yields, which seem to be unsustainably low given its nearly constant promotions and relatively high operating costs with the 777. But the carrier has provided load factor data, which shows the carrier has been successful at stimulating demand. Scoot says its average load factor since launching is 81%.

Scoot already passed the two million passenger milestone in Jan-2014. The carrier also has been operationally successful with a 90% on time departure rate and over 90% of passengers being checked in within 10 minutes. So far it has only had to cancel two flights within six weeks of departure, an impressive figure given it does not include a spare aircraft in its fleet. 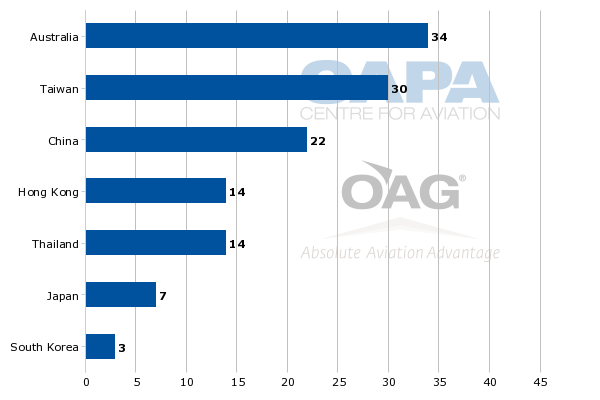 787-8 will allow Scoot to increase frequencies in thinner markets

With the 787-8 Scoot will have the flexibility to use another less dense but significantly more efficient aircraft on its thinner routes. Scoot aims to increase almost all its routes to daily once it transitions to a 787 fleet. (Unless Singapore and South Korea agree to extend their air services agreement, Scoot will not be able to upgrade Seoul to daily.)

Scoot also believes the 787-8 will provide the right size aircraft and economics to decouple Qingdao and Shenyang as well as add more secondary destinations in mainland China. It will also consider decoupling Taipei and Tokyo, although this will need to be coordinated closely with SIA which could prefer to continue having Scoot offer a one-stop product in the Singapore-Tokyo market.

Scoot has not yet finalised a configuration for the 787-8 but it is looking at about 330 seats. Scoot will be the third LCC with 787-8s, following Norwegian Air Shuttle and Jetstar Airways. Norwegian has a relatively spacious configuration with only 291 seats, including 32 in business and 259 in economy. Jetstar configured its 787-8s with 335 seats – 21 in business and 314 in economy. Scoot has closely evaluated the Jetstar configuration but most likely will opt for one less row as it sees a need for a slightly bigger galley.

Both the 787-8 and 787-9 have the range to operate flights to Europe from Singapore. But Scoot at least for the medium term has no intentions of serving Europe and plans to stick within Asia-Pacific, with several new destinations likely to be added in 2015.

Scoot’s last two destinations, Perth and Hong Kong, were added in late 2013. It is unlikely any new destinations will be added in 2014 as the carrier takes a hiatus from expanding its fleet.

A few months ago Scoot was aiming to add at least one destination in late 2014 as its fleet plan envisioned the first 787-9 being used as a growth rather than replacement aircraft. But the carrier is now looking at removing one 777-200 when its first 787-9 is delivered. However, a final decision on the 2014 fleet plan has not yet been made and Scoot could potentially turn back on growth for the Nov/Dec timeframe.

The late 2013 decision to pursue a new joint venture in Thailand with short-haul LCC Nok Air likely drove the re-think. As CAPA previously reported, NokScoot plans to launch operations by the end of 2014 with an initial fleet of two 777-200s. While NokScoot has not yet acquired its aircraft, the most likely scenario is for at least one of the carrier’s initial two aircraft to come out of Scoot's fleet.

NokScoot aims to launch in 2H2014; Scoot to interline with Nok

Mr Campbell said during the 10-Feb-2014 media briefing that NokScoot is expected to launch services in 2H2014 but a more precise date cannot be provided given the volatile situation in Thailand. The unstable political situation in Bangkok, where protests have erupted in recent weeks ahead of elections, could potentially slow down the process of securing an air operating certificate as the government has other priorities. But Scoot is confident that the Thai market will recover, as it has in the past following unstable periods.

Scoot has taken a 49% stake in NokScoot. Mr Campbell says the new carrier “will draw from each parent’s strengths” with Scoot providing experience in widebody aircraft operations and international distribution while Nok has a good understanding of the Thai market.

Scoot also plans to leverage Nok’s leading domestic network by interlining with Nok Air’s existing short-haul operation. Scoot recently decided to move its daily Bangkok flight from Suvarnabhumi to Don Muang, where Nok and NokScoot will be based. The shift in airports will allow Scoot to provide seamless connections with Nok and eventually NokScoot.

Scoot plans to start serving Don Muang within the next few months but Scoot expects it will take longer before it starts interlining with Nok. As Nok currently does not have any codeshare or interline partners, it will need to add new capability to its reservation system before it can implement the planned partnership with Scoot. 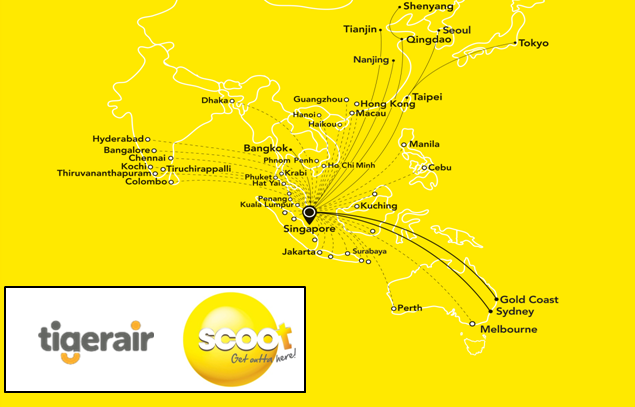 The implementation of a stronger partnership with Tigerair and new partnerships, starting with Nok, will be key developments for Scoot in 2014. The introduction of 787 operations late in the year will be a major milestone, ushering in improved efficiency and putting Scoot in the spotlight as it becomes only the second 787-9 operator in the world.

Scoot still has several challenges to overcome, including unfavourable conditions in some of its key markets, particularly Australia. But with the transition to 787s and the launch of an affiliate in Thailand the carrier’s outlook is relatively bright. 2014 will be a year in which Scoot can take a pause after pursuing rapid growth in its first 18 months and focus on improving the performance across its existing network while preparing for the 787 and the launch of NokScoot.