The Saudi Arabian airline market is poised for rapid growth over the next few years as the kingdom relies on aviation and tourism to diversify its economy. LCCs are particularly well positioned as low fares stimulate demand among a youthful population that is eager to travel more.

Saudia Arabia's two LCCs, the privately owned flynas and Saudia subsidiary flyadeal, are planning rapid expansion. Flynas has placed orders for 80 A320neos, enabling the airline to triple its fleet over the next eight years, while flyadeal plans soon to place an order for 30 new generation narrowbody aircraft.

The passenger aircraft fleet in Saudi Arabia has grown by 15% over the past year, driven by rapid expansion at Saudia and flyadeal. The Saudia Group now accounts for approximately 80% of the fleet and 75% of domestic fleet capacity. The group's new two-brand strategy should enable it to maintain strong market share as competition intensifies and the market doubles in size over the next few years.

Government-owned Saudia still dominates the Saudi Arabian market, which was opened to private competitors for the first time in 2006. Saudia currently accounts for approximately 68% of domestic seat capacity and 36% of international seat capacity, according to CAPA and OAG data.

Flynas, one of two original private competitors, is the second largest airline with nearly a 20% domestic share and a 5% international share. Three recent start-ups account for the remaining 13% share of the domestic market, led by Saudia’s new LCC subsidiary flyadeal.

Flyadeal has been able to quickly secure more than a 7% share of domestic capacity, lifting the Saudia Group total to a powerful 75%. 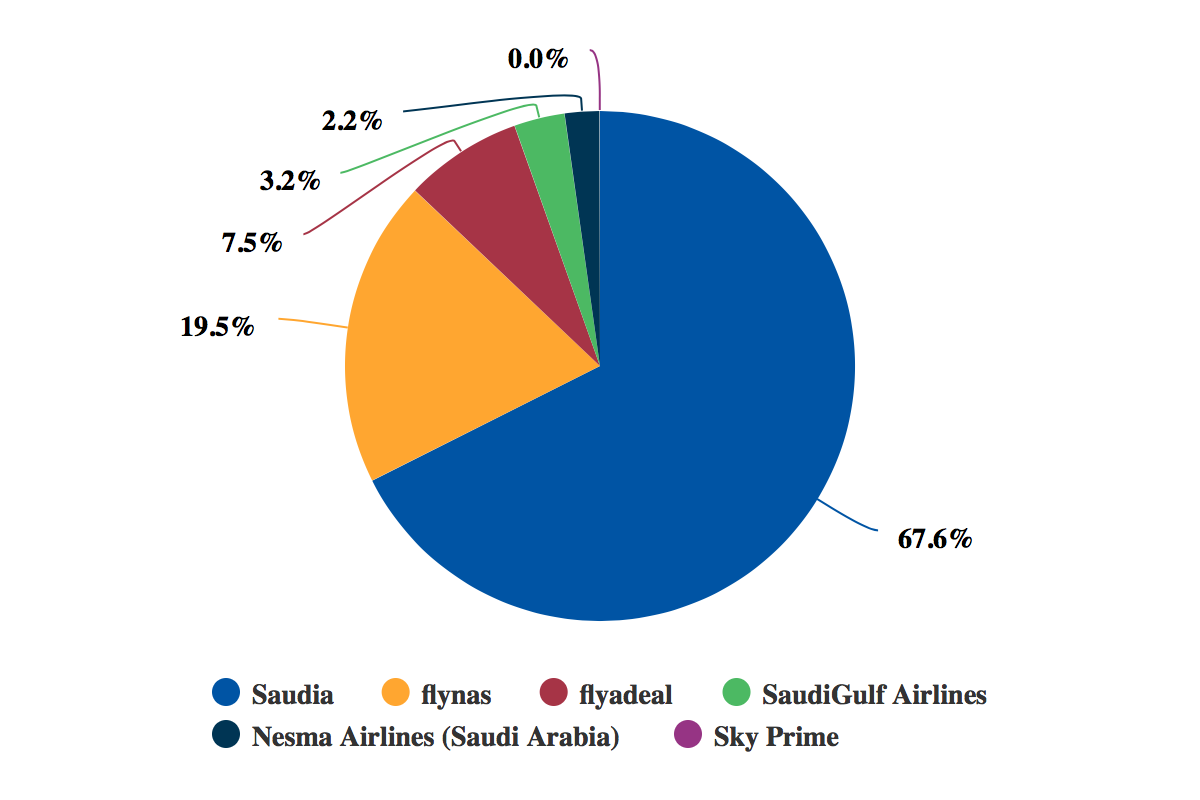 Flynas is no longer a pure LCC

Sama struggled, hindered by a regulatory environment that made it challenging for LCCs, and ceased operations in 2010. Nasair adjusted by adopting a hybrid model which enabled it to survive and expand. The airline rebranded as flynas in 2013 and at the same time moved further from the LCC model by introducing a business class product.

Flynas experimented with long haul operations in 2014 by wet leasing A330s. Flynas has since focused entirely on short haul services using A320 family aircraft, but is considering the relaunch of long haul flights and a potential acquisition of widebody aircraft. Its current network consists of 15 domestic destinations and 21 international destinations in Africa, the Middle East, Turkey and Pakistan (based on OAG data for Apr-2018).

The flynas fleet currently consists of 26 156-seat two-class A320s and two 128-seat two-class A319s, according to the CAPA Fleet Database. All 28 aircraft are leased and are five to 14 years old, with an average age of 11 years old.

Flynas to accelerate expansion with A320neos

The A320neos will enable flynas to accelerate growth. Flynas plans to have all 80 A320neos in service by the end of 2026, enabling it to triple the size of its fleet over the next eight years – even when the return of all its A320ceos is factored in. The A320neo will also enable flynas to expand its international network deeper into Africa, Asia and Europe without needing to invest in widebody aircraft again. Flynas is evaluating conversion of some of its A320neo orders to A321neoLRs, which would provide even more range, as an alternative to potential widebody aircraft.

Flynas has carried more than 38 million passengers since its 2007 launch but its rate of growth has slowed in recent years. Flynas’ passenger traffic increased by less than 2% last year – from 6.3 million passengers in 2016 to 6.4 million in 2017.

Over the same three-year period Saudia has added 36 aircraft, representing growth of 31%. Saudia currently operates 152 passenger aircraft, consisting of 63 A320 family aircraft and 89 widebodies, and has firm orders for 19 aircraft.

Three start-ups launch within one year

A new batch of three start-up airlines have also been expanding faster than flynas over the past year.

SaudiGulf Airlines launched domestic flights in Oct-2016, following a full service airline model, and began international operations in early 2018. SaudiGulf currently serves four domestic and one international destination with a fleet of two-class A320s. SaudiGulf also has commitments for 16 CSeries CS300s, which it ordered in early 2014, and has been looking to acquire 777s.

Flyadeal is the most recent start-up, having launched operations in Sep-2017. It is also by far the most ambitious of the start-ups and, as a fully owned Saudia subsidiary, clearly has the strategic initiative to pursue rapid expansion.

Flyadeal is following a pure LCC model and intends to stick to this model, confident that the Saudi Arabia market is now able to support a true LCC. The market has further liberalised since the failure of Sama and the regulatory environment has improved significantly. Fare caps are being lifted later this year and the government is phasing out fuel subsidies for Saudia, which has distorted the playing field.

Flyadeal also claims to be the only pure LCC in the Middle East, pointing out that other LCCs in the region such Air Arabia, flydubai and Jazeera all follow hybrid models. Flyadeal believes its position as the region’s only pure LCC provides a huge white space for growth in both the domestic and regional international markets. Its parent Saudia is focused on the premium end of the market while flyadeal is distinctly at the opposite end, and the region’s other LCCs are generally in the middle with a hybrid product.

Flyadeal CEO Con Korfiatis told CAPA TV in Mar-2018 that the response from Saudi consumers on its initial seven routes had been encouraging, prompting the airline to add frequencies on some routes faster than initially forecast.

“Clearly, low-cost is popular”, he said. “People love the low fares and it doesn't matter what part of the country they're in. Whether they’re from the bigger cities or the smaller cities, they're coming in numbers that are filling the flights that we're putting on so far.”

Mr Korfiatis said that flyadeal was considering the launch of its first two international destinations with the next few months, as well as continuing to expand domestically. It is now evaluating five or six potential international destinations and intends eventually to serve all of them as it expands its fleet. Flyadeal is also evaluating three to four potential cities in Saudi Arabia in a competition to select its second base after Jeddah.

Flyadeal expects to focus mainly on the domestic market, where there has been high double-digit growth in recent months, but also expects to build up a relatively large international operation over the next few years. Long haul routes are already under consideration, using new long range narrowbody aircraft (such as the A321neoLR) or widebody aircraft.

Flyadeal plans to take delivery of another two A320ceos by mid-year, fulfilling its initial commitment with leasing companies for eight aircraft. It is currently evaluating offers from Airbus on Boeing from an RFP for 30 firm narrowbody aircraft and 20 options, and expects to make a decision in May-2018 or Jun-2018.

The ambitious flyadeal fleet plan includes two to four additional aircraft in 2H2018 followed by eight to 10 additional aircraft in 2019, potentially lifting the fleet to 20 aircraft at the end of 2019. Flyadeal is interested in near term delivery slots that have opened up at Airbus and Boeing that could enable it to take its 2H2018 and 2019 aircraft from its upcoming order. However, it is also considering acquiring more aircraft from lessors before transitioning to direct purchases.

Flyadeal is evaluating the 737 MAX family, although the A320neo family would be a more obvious choice given that it has started with A320ceos. The upcoming order will likely include some aircraft of higher density (such as the A321neo and 737 MAX 9 or 737-10). Large gauge narrowbody aircraft are ideal for trunk routes and will enable flyadeal to reduce its unit costs further.

Flyadeal aims to become the second largest airline in Saudi Arabia within a few years. Its position as the only pure LCC and its relationship with Saudia will obviously help, but overcoming intense expansion from start-ups and flynas as it reaccelerates its expansion could be challenging.

Its full service parent Saudia is also planning rapid expansion, aiming to increase annual passenger traffic from approximately 30 million currently to 50 million by 2020. This represents a rapid acceleration from the relatively modest growth achieved over the past five years; Saudia carried 25 million passengers in 2013.

Saudi Arabia’s aviation market overall is poised for rapid growth under the government’s Vision 2030 reform plan. Aviation and tourism are key pillars of the plan as Saudi Arabia aims to liberalise, internationalise, and diversify its economy away from oil.

Saudi Vision 2030 should facilitate rapid growth for all types of airlines. However, the LCC model is particularly well placed, given the ability of lower fares to stimulate growth among Saudi Arabia’s young population.

Saudi Arabia has a very young demographic, with 70% of the population under 30, a segment already having high discretionary income levels and a high propensity to travel. Saudis are generally keen to travel more frequently, leading to rapid growth in the domestic and outbound market, while the inbound market should grow as Saudi Arabia liberalises and starts to develop tourism.

Saudi Arabia’s passenger fleet could easily double in size, to 400 aircraft, over the next few years. While the Saudia Group is well positioned to maintain very strong market share with its new dual brand strategy, there are also now ample growth opportunities for private operators.