SAS returns to profit in FY2013 through cost reduction, but is not out of the woods yet

The SAS Group returned to net profit in FY2013, mainly through successful cost reduction. There was no growth in revenues, in spite of 6% ASK growth by the core SAS airline. In addition to cost cutting, the group’s restructuring in the year also included the sale of 80% of its Norwegian regional subsidiary Widerøe and the sale of 10% of its ground handling operation to Swissport as a first step in what is intended eventually to be a full disposal.

Improved profitability was essentially the result of SAS lowering its unit costs, CASK, faster than the decline it suffered in unit revenues, RASK. In both cases, this extends the trend of recent years. However, in spite of attempts to shore up demand (with some success – it has grown membership of its EuroBonus FFP), the slide in RASK accelerated in 4Q2013. This was partly currency related, but also reflects tough competitive dynamics in SAS’ markets.

Moreover, its CASK reduction in the year, while commendable, still leaves it with one of the highest levels of unit costs in Europe. SAS is not out of the woods yet - but the profit is a welcome result.

The group’s EBIT margin of 3.3% was ahead of its 3% target for the year and showed a steady improvement through the year. This illustrates the impact of the 4XNG restructuring programme. 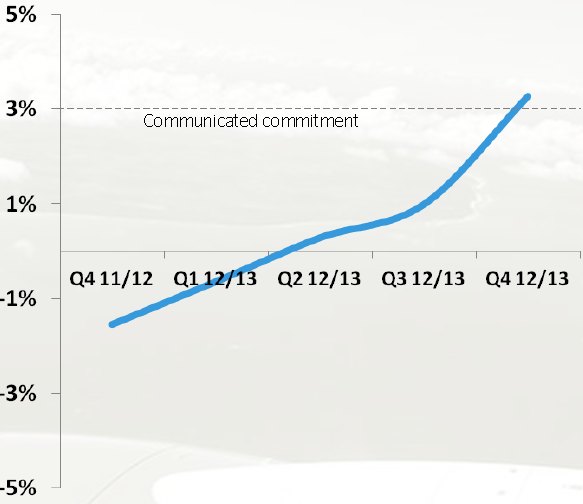 SAS' ratio of net debt to equity fell to 41% from 59% at the end of FY2012. Adjusted net debt to equity (taking account of operating leases in debt) fell from 154% to 149%. The group’s balance sheet is improving on an underlying basis, although it is worth noting that the book value of shareholder’s equity will be adversely affected by around SEK7 billion (EUR78 million) in FY2014 by factors related to changes in its pension scheme and in pension accounting standards. 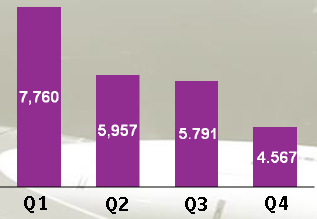 The group sold subsidiary Widerøe during the year, leaving the core business of the group, Scandinavian Airlines, on which we will focus our analysis. SAS airline saw almost no change in passenger numbers in FY2013. Nevertheless, RPKs increased by 3.8%, reflecting longer average sector length. ASKs grew faster, at 6.0%, and so passenger load factor fell by 1.5 ppts to 73.6%.

The ASK growth was focused on European and intra-Scandinavian routes (+9.0%). Short-haul aircraft utilisation increased by 5.3% for the year, although this slowed to 1.6% in 4Q. Intercontinental routes saw ASK growth of 5.2%, while domestic capacity was flat (-0.2%). SAS focused on growing membership of EuroBonus, its FFP. 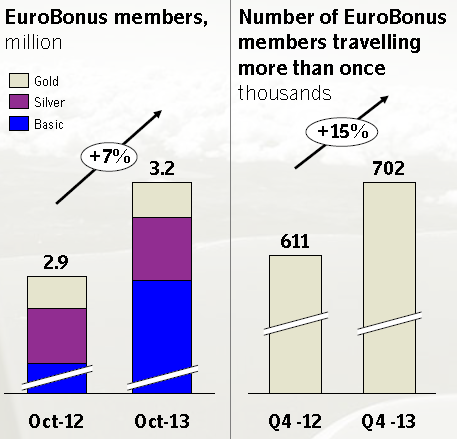 Revenue trends weakened in 4Q, with total traffic revenue up only 1.4% compared with 3.1% for the full year (both on a constant currency basis). In 4QFY2013, the decline in total RASK accelerated to 7.3%.

Operating costs for SAS (which excludes Widerøe) fell by 6.8% in FY2013, a much faster drop than revenues, although this is distorted by significant non-recurring costs in last year’s results. Adjusting for this, operating costs fell by 2%, still a robust result given 6% ASK growth. The airline’s operating cost per ASK, CASK, fell by 7.6% (excluding currency movements, this was a fall of 6.0%).

Labour costs fell by 18%, although this was flattered by changes in the treatment of pension costs and a reduction in restructuring costs. On a like for like basis, labour costs fell by 4.5%. The airline’s headcount fell by 6.4%, reflecting measures taken under the restructuring programme. Fuel costs fell 2.9%, with lower jet fuel prices and currency movements outweighing increased volume and hedging losses. 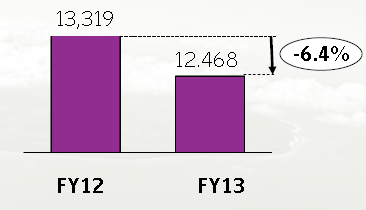 SAS Group had a fleet of 156 aircraft (139 in service) and 10 leased to other carriers as at 31-Oct-2013. The replacement of SAS’ McDonnell Douglas and 737 Classics with A320s and 737 Next Generation aircraft is almost complete. The carrier has finally ceased operating MD80s, after the type’s last flight operated by SAS in 4Q2013.

SAS: one medium-haul aircraft type per base 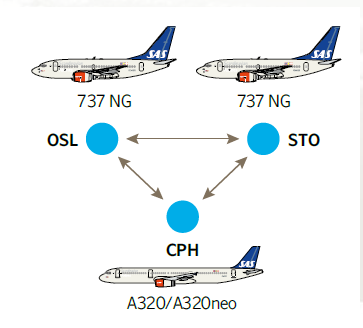 For FY2014, SAS plans to increase ASK by 3.4% in spite of what it refers to as “over capacity in certain markets and continued competitive yield pressure”. The fourth quarter of FY2013 saw a deterioration in load factor and yield trends as a result of intensified competition and weak economic growth and these conditions are continuing into the early months of FY2014, according to SAS.

CEO Rickard Gustafson told analysts on a conference call to discuss the FY2013 results that SAS was “always trying to adapt capacity growth so that it should meet the same pace as growth in demand”. However, due to weaker economic conditions in Europe than previously expected and a switch in market capacity from southern Europe to northern Europe, overall capacity growth is outpacing demand growth in SAS’ markets.

In spite of this, Mr Gustafson said SAS was “not moving capacity down”. He argued that half of its ASK growth is coming from larger aircraft with more seats as a result of the fleet upgrade programme. Moreover, as the leading Scandinavian carrier with “lots of frequent travellers”, he is keen that SAS should maintain its schedule on “critical destinations”.

Positive earnings before tax expected in FY2014, but downward pressure on RASK remains

In terms of financial targets, SAS expects a positive figure for earnings before tax in FY2014 “provided that market conditions, in terms of capacity, jet fuel and exchange rates, do not decline any further and that no unexpected events occur”. This is no more than the target set for FY2013, although Mr Gustafson said that the 4XNG restructuring programme was expected to generate savings of SEK1.2 billion (EUR13 million) in 2014, after achieving SEK1.5 billion (EUR17 million) in 2013.

“Cost efficiency and productivity are the name of the game in this industry,” Mr Gustafson said. SAS has performed creditably on costs in recent years, but demand is where the uncertainty lies. The airline has managed to reduce CASK by 25% since 2009, but RASK has also been sliding (see chart below).

While the annual drop in RASK has been less than the drop in CASK since 2009, leading to improved profitability, margins remain short of SAS’ medium term target. Moreover, the 4Q RASK decline in FY2013 was bigger than the 4Q cut in CASK and finding a way to reverse the downward RASK trend is proving to be elusive. 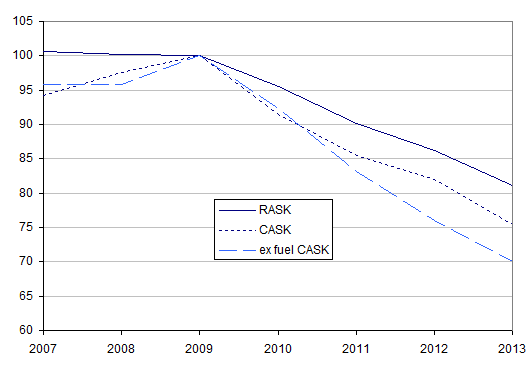 SAS has done a reasonable job in attempting to improve demand for its service by growing its FFP members and by introducing revised product concepts under the names ‘SAS Go’ and ‘SAS Plus’. Mr Gustafson said “reaction from customers is primarily positive” to the new product, although he conceded that there is a “constant need to tweak and enhance the offering.”

Nevertheless, as CAPA has said before, it is difficult to see the new products as much more than re-labelling and perhaps a little re-bundling of product features.

For SAS, it may be time to reduce capacity plans

As a result of softer market conditions this winter, and in spite of SAS’ ongoing cost focus, SAS says that 1QFY2014 will be “extremely weak”. Indeed, traffic results for Nov-2013, the first month of its new financial year, show a 2% fall in passenger numbers and a 2.8ppt drop in load factor and SAS says the yield trend continues to be negative.

Moreover, its medium term EBIT margin target of 8%, previously set for FY2015, has now been pushed out to FY2016. This suggests that SAS expects it will become increasingly difficult to keep cutting CASK faster than the fall in RASK. While ASK growth may be good for the former, it is harmful to the latter.

The 4XNG programme is well on the way to delivering its target of SEK3 billion (EUR33 million) of cost savings between 2013 and 2015, but SAS is still positioned among Europe’s highest CASK carriers (see chart below) and faces ever growing LCC competition from the likes of Norwegian, Ryanair and easyJet. And they too plan to reduce costs.

There can be no let up in the cost reduction focus for SAS.

At the same time, with RASK continuing to slide, perhaps the time has come for SAS to lower its capacity growth plans. 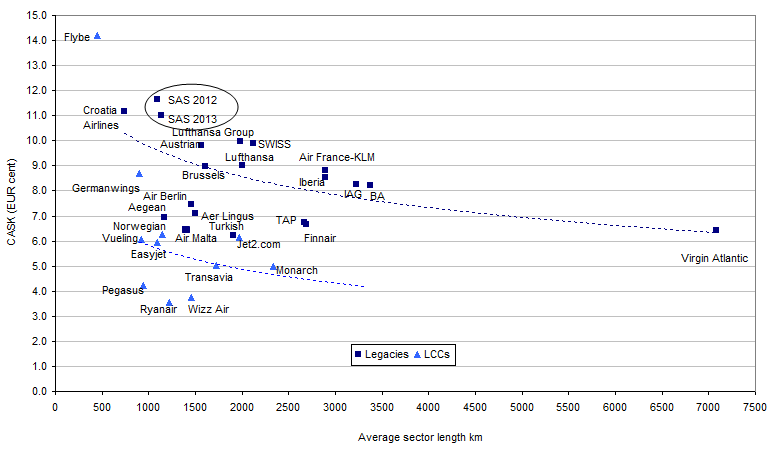