SAS narrowed its underlying loss in 2QFY2015, after stripping out the gain on the sale of two slot pairs at London Heathrow. The Scandinavian airline is enjoying a more benign capacity environment this year, particularly in short and medium-haul markets, and is cutting its own capacity. This allowed it to grow its unit revenue at a faster pace than its unit cost, prompting a modestly more positive outlook for FY2015.

Although SAS has invested in product improvements and is growing its revenues from members of its Eurobonus scheme, low cost competition in Europe is making short-haul markets increasingly price-based. FY2015's positive unit revenue conditions may not last, especially within Europe.

Looking into 2016, SAS is planning to return to capacity growth, through long-haul expansion. It is looking at adding further long-haul aircraft to its fleet, beyond the four A330s and eight A350s currently on order. However, competition on long-haul markets is also fierce.

In 2QFY2015 (Feb-2015 to Apr-2015), SAS reported a pre-tax profit of SEK355 million (EUR38 million), turning around a loss of SEK1,078 million in the same period a year earlier. However, the result this year included a capital gain of SEK678 million on the sale of two slot pairs at London Heathrow and a reduction in net financial charges of more than SEK300 million.

The operating result, which excludes these and other non-recurring items, remained in loss. However, the operating loss narrowed by 66% from SEK660 million to SEK226 million (EUR24 million) (before SAS' share of income in affiliated companies). Revenue grew by 11.0% to SEK9,403 million (EUR1,004 million) and the operating margin improved from -7.8% to -2.4%.

*before non-recurring items and share of income from affiliates
Source: CAPA – Centre for Aviation, SAS

In spite of the drop in load factor, currency-adjusted scheduled passenger revenue per ASK increased by 6.8% in 2Q, close to the 6.7% increase in 1Q, driven by strong yield growth (+8.8% excluding currency movements).

The two quarters of improving passenger RASK in FY2015 are in contrast with the falling unit revenues seen in FY2014 and reflect the positive impact on yields of capacity cuts by SAS and a much more constrained market capacity environment. 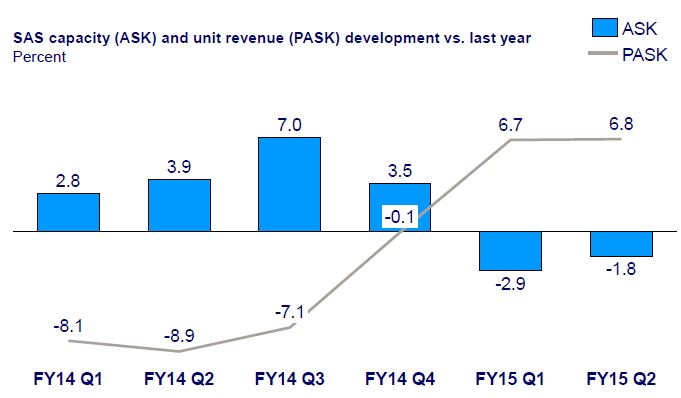 As noted above, currency adjusted scheduled passenger revenue per ASK jumped by 6.8%. Passenger revenue was also boosted by currency movements. Charter revenue fell by 34.6%, driven by the cut in charter ASK capacity (which we calculate was down 37.4%).

Total operating costs grew by 5.4% in 2QFY2015, ahead of the growth in total ASKs, but below the growth in revenue. SAS' fuel bill increased by 15.8%, as a weaker SEK versus USD and the airline's fuel hedging programme more than outweighed lower market prices for jet fuel.

Labour costs fell by 1.6%, but all ex fuel costs increased by 2.6%. Savings of SEK230 million from the cost reduction programme were offset by increased costs in areas such as selling, catering, IT and handling. SAS expects cost reduction measures to have an earnings impact of SEK1.3 billion in FY2015.

Currency-adjusted unit costs were flat year on year and up 3.4% if fuel is excluded.

According to data presented by SAS on a conference call with analysts to discuss the 2Q results, the total number of seats in the market to, from and within Scandinavia will be flat in FY2015, after compound average growth of 5% pa from FY2010 to FY2014. Capacity restraint is most centred on the market to/from Europe and within Scandinavia, while seat numbers in long-haul markets are expected to rise by 10% in FY2015.

Number of available seats and passengers to, from and within Scandinavia 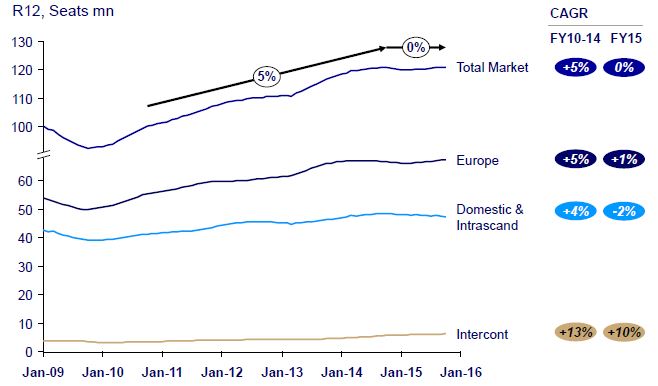 SAS also presented data showing that the total number of seats in the market to, from and within Scandinavia had grown by almost 10 million seats, or 15% from summer 2011 to summer 2015. Over this period, the growth had all come from low-cost carriers (+6 million seats) and new lower cost production companies (+4 million seats, including subsidiaries of legacy airlines), while traditional airlines had seen their share of the total fall from 63% to 55%.

Although the tighter capacity environment in 2QFY2015 was likely the main reason for strong unit revenue, SAS' scheduled passenger RASK performance was probably also helped by product improvements and growth in its Eurobonus FFP.

SAS frequently cites its objective to make travel easier for Scandinavian frequent travellers. Speaking on the 2Q conference call with analysts, SAS CEO Rickard Gustafson said that there were around two million people in Scandinavia (representing 10% of the population) that take more than five round trips a year. He added that these travellers account for between 75% and 80% of the total value of air fares purchased in the region. SAS aims to increase its share of this frequent traveller market.

The number of Eurobonus members increased by 15% year on year to 3.9 million in 2QFY2015 and the share revenue from these members grew by 3 ppts to reach 50%. According to Mr Gustafson, this milestone means that SAS is now a "membership airline". 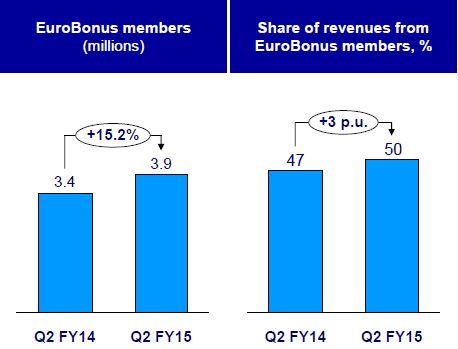 For FY2015, SAS plans a total ASK cut of between 1% and 2% (versus a 2.3% cut in 1H). It expects profit before tax and non-recurring items to be "clearly positive", provided that the economy does not weaken and subject to continued capacity reduction trends and no further exchange rate deterioration.

This FY2015 profit target, while still vague, is more bullish than after 1Q result, when SAS merely said that "the potential exists" for a positive result and has been prompted by stronger yields.

Narrowbody deliveries in Europe are set to grow

Looking a little further ahead, SAS warned that expected narrowbody deliveries into Europe in 2016-2018 would be higher than in 2013-2015 and that this would likely see market capacity growing more rapidly. In particular, much of the new capacity within Europe will be operated by LCCs.

This will put downward pressure on pricing and, consequently, increase the need for unit cost reduction. The conditions that have seen SAS grow both RASK and CASK in 1HFY2015 (with RASK growth outpacing CASK growth) cannot be expected to endure. Future profit improvement will most likely need to come from CASK reduction. SAS' investment in product improvements, both onboard and at the airport, is more a necessity to stay in the game as a full service carrier than it is a sustainable RASK enhancer.

SAS will grow its long haul-network in 2016

SAS itself will probably return to ASK growth in 2016, increasing its own capacity by a "mid-single digit" rate, according to Mr Gustafson. However, SAS' growth will mainly be on long-haul markets, reversing its intercontinental capacity cut in FY2015. It will launch its Hong Kong service from Stockholm in Sep-2015. Cabin upgrades for its A330 fleet are now complete and the A340 fleet will be upgraded this autumn.

SAS has two A330E aircraft due to be delivered this year, the first in Sep-2015, and two more in 2016. Eight A350 aircraft are scheduled for delivery in 2018-2020. Beyond these existing orders, SAS is looking at possibilities for further increases to its long-haul operation, whether by extending leases or through new leases in the market. It is considering not only A330 aircraft, but also A340s, since the cost of operating the A340 has fallen in recent months (as CFO Goran Jansson reminded analysts).

Mr Gustafson said that SAS was considering new long-haul routes both in North America and in Northeast Asia, from all three Scandinavian capital cities. However, as short-haul markets see increased competitive pressure from LCCs, SAS is unlikely find much respite on long-haul markets.

Although nearby competitor Finnair has slowed its long haul expansion in the past two years, it remains committed to strong growth in its Asia network, where it is much larger than SAS. Moreover, Norwegian Air Shuttle is now a significant competitor on the North Atlantic and has ambitions to grow its Asian network too.

Of course, Gulf-based super connectors also remain a threat to European airlines on long-haul markets. Perhaps SAS has high expectations from its new codeshare agreement with Etihad, although the Abu Dhabi-based airline does not currently serve Scandinavia. SAS' long-haul growth is likely to be challenging.