European airline shares declined again on Thursday (16-Sep-2010) with wider markets, as investors continued to sell shares on disappointing economic data, including a rise in US jobless claims and poor retail sales in the UK.

Mr Jansson said he believed SAS would require a buyer in the future to ensure its survival and will likely be part of future consolidation within the industry in Europe, which may be one or two years off. Both the current government and the opposition have previously said they are open to selling Sweden's 21.4% stake in the carrier.

Turkish Airlines was also flat. The carrier stated during trading, passenger numbers rose 17.8% year-on-year to 19.2 million during the first eight months of 2010. Load factor rose 3.4 ppts to 73.9% for the period.

Aer Lingus (+0.3%) made a marginal gain after CEO, Christoph Mueller, stated the carrier can survive as a standalone airline but may consider selling a stake to a larger airline, identifying Lufthansa’s acquisition of a minority stake in Brussels Airlines as a good model for such a move. Mr Mueller also commented that he does not expect another bid from Ryanair, due to opposition of such a takeover from the European Commission and that Aer Lingus’ shares “have become too expensive for them”. He admitted the carrier has been considering closer links with a global alliance, as he believes “consolidation around the three alliances will continue”.  However, the CEO did not rule out purchases of its own. 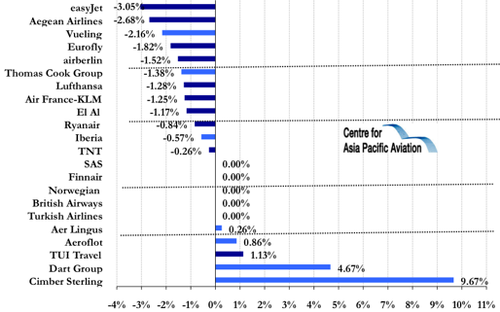