Even as Lufthansa and Air China ended long haul flights from San Jose Mineta International in 2018, the airport still posted record passenger growth for the year, and its prospects still remain solid now that Delta Air Lines has declared the San Jose, California, region as one of its newer focus cities.

Given the proximity of San Jose to Delta’s US west coast trans Pacific gateway in Seattle, it is a safe bet that Delta will not add long haul service to Asia from the airport, but the focus city status guarantees a level of commitment from Delta for service expansion.

San Jose is now enjoying a prolonged period of stable passenger growth, which should continue given its stature as the closest airport to the booming Silicon Valley technological hub; its designation as a focus city for Delta adds a certain level of security for the airport for the future. 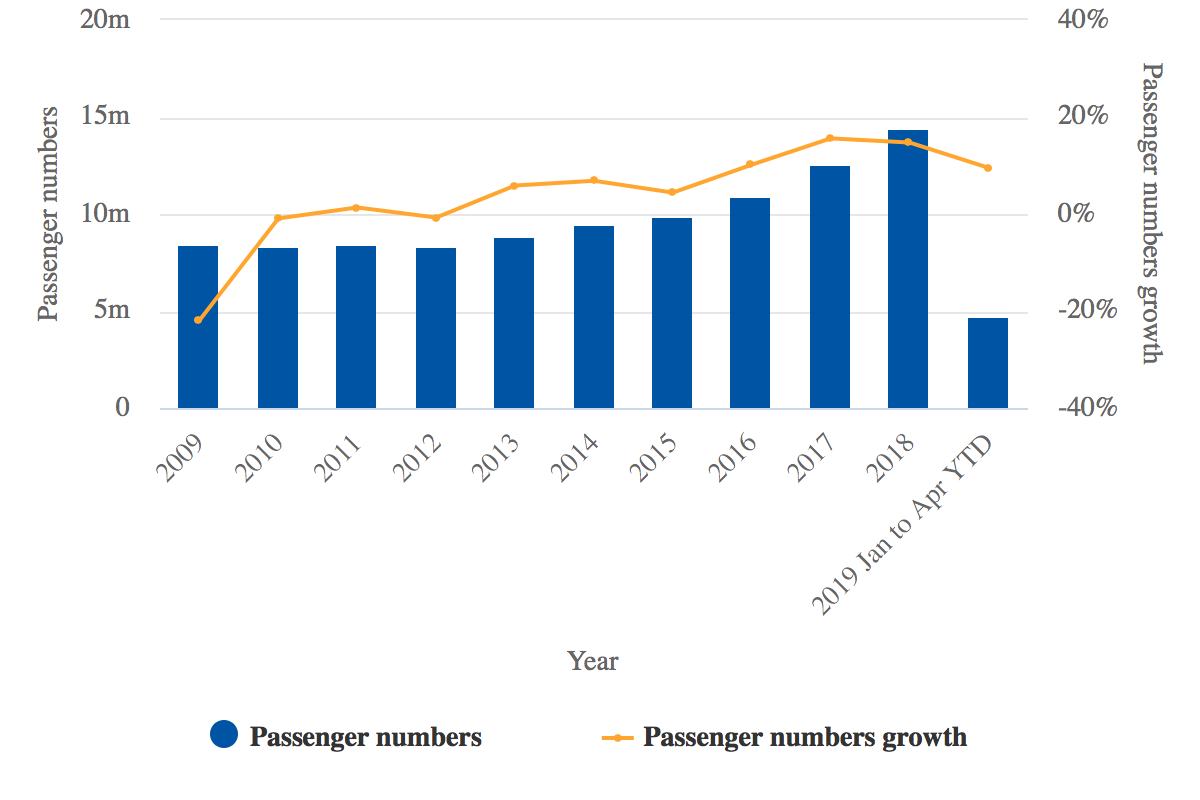 Mineta International has endured its share of tumult since the 1980s, for a period enjoying status as a hub for American Airlines with long haul flights to Paris, Taipei and Tokyo.

This was then followed by the Sep-2001 terrorist attacks and the bust of the dot-com boom, which resulted in the airport losing a significant number of routes, including all of its long haul services.

But during the current decade San Jose has recovered some its abandoned domestic flights as its proximity to the booming tech hub of Silicon Valley gives it a geographical advantage. CAPA partner OAG ranked the airport as the third fastest growing mid-size US airport from May-2017 to Apr-2018, with seat growth of 15%.

Despite its stature as one of the fastest growing medium sized US airports (based on annual departing seats of three million to 20 million), San Jose experienced setbacks in 2018 when Lufthansa ended flights to Frankfurt and Air China opted to cut its service to Shanghai.

Both routes had started in 2016, and Lufthansa opted to end service after concluding that it could not rationalise the cost of the route’s commercial viability.

Lufthansa operates service to Frankfurt from San Francisco International, which is 78km from San Jose and a hub for its trans Atlantic joint venture partner United Airlines. Previously, the news outlet SFGate had pointed out that the end of subsidies to Lufthansa and the termination of its flights from San Jose happened almost simultaneously.

The main reason for Air China’s suspension was the reduced number of Boeing 787s in its fleet due to aircraft maintenance as a result of issues with the Rolls-Royce Trent 1000 engines that power those aircraft. But its subsidies on the route also ended around the same time and the airline decided to cut its services.

Those cuts were no doubt a setback for the airport. But San Jose does still maintain long haul British Airways flights to London Heathrow, trans Pacific flights by ANA to Tokyo, and Hainan’s flights to Beijing.

San Jose is now a focus city for Delta...

San Jose recently won a designation by Delta as a focus city for the airline, joining Austin Bergstrom International airport and Nashville International as new airports attaining that status from the company.

Raleigh Durham and its former hub in Cincinnati are also focus cities for Delta, and the airline has also recently upgraded Boston from a focus city to a hub. The criteria for Delta determining which region attains focus city status could be open to interpretation. But one common theme among San Jose, Raleigh, Austin and Nashville is each area’s status as a growing technological hub.

Previously, CAPA has reported that since 2013 the number of tech jobs in the Nashville region had grown by approximately 30%, and Raleigh and Austin’s status as growing tech hubs is well established.

In the past, Delta has stated that Raleigh was a prime candidate for being designated as a focus city due to its accelerating growth rate and strong economy, fuelled by the technology and biotechnology industries. The airline also noted that no airline in Raleigh has more than a 15% market share.

San Jose Mineta International airport percentages of ASKs by airline, as of mid-Jun-2019 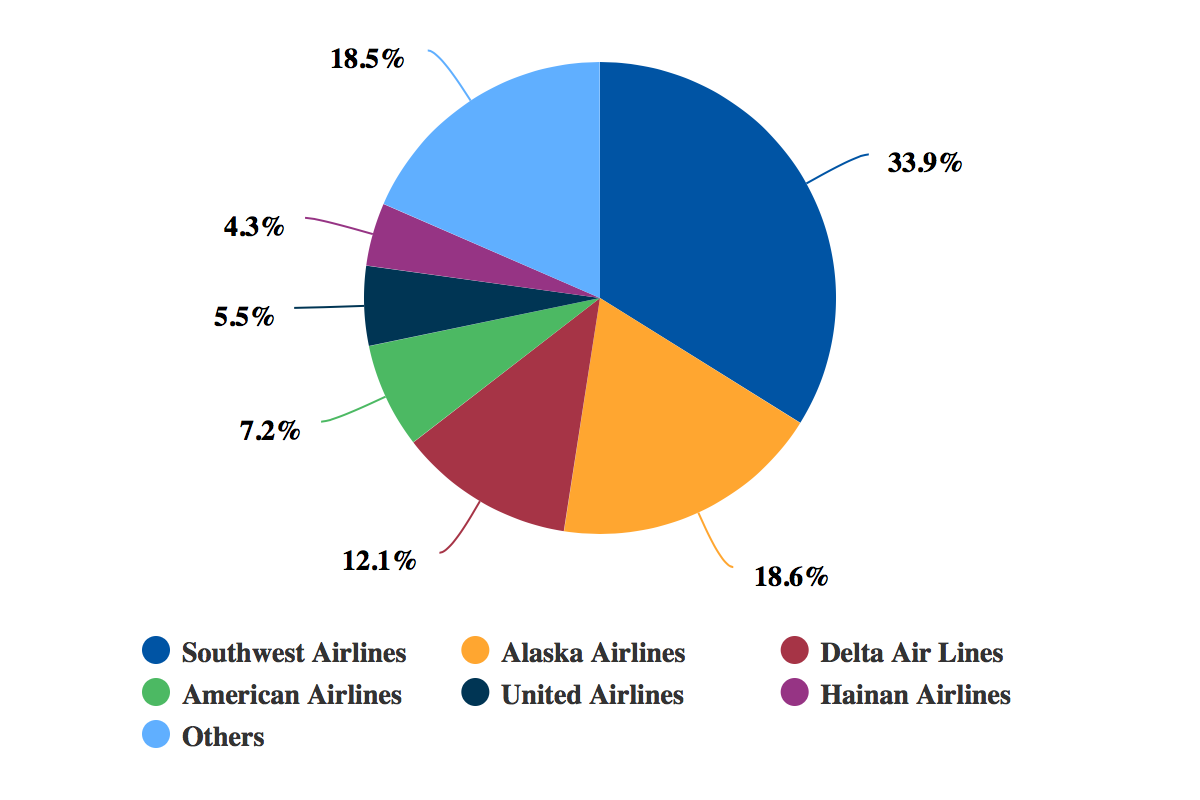 Now that Delta has officially designated San Jose as a focus city, the logical conclusion is that the airline will grow from the market.

It would seem logical that Delta is evaluating potential service to some of its other tech-centric focus cities from San Jose. The airport’s largest airline, Southwest, just recently launched daily year-round flights to Nashville and once weekly seasonal fights to Raleigh. Southwest also operates services from San Jose to Austin.

Delta is likely examining whether it can secure key corporate contracts in those markets while offering customers one-stop connections to a global network that is far more robust than those of San Jose’s largest airlines.

There are no indications that Delta has any plans for long haul service from San Jose now that the region has gained focus city status. The airline will take care to ensure that it does not diminish its trans Pacific gateway in Seattle, but it has added long haul flights from Raleigh to Paris, a hub for its JV partner Air France-KLM.

It is by no means a foregone conclusion that Delta will add long haul flights from San Jose; it doesn’t offer intercontinental flights from Nashville or Austin. And for now, the likely focus is to bolster its domestic presence from San Jose.

San Jose is just one of many mid-sized US airports that are enjoying somewhat of a resurgence as airlines look for opportunities at non hub airports in a consolidated US market.

Despite the setbacks in its long haul service, the endorsement from Delta as a focus city bodes well for San Jose as it works to carve out its place in a mature, but evolving, US market.