Salt Lake City International airport is one hub that has persevered during US airline consolidation resulting in four mega airlines controlling roughly 72% of the country’s system wide seats.

The airport remains a pillar of Delta’s US domestic hub network, and the airline has endorsed a massive USD3.6 billion reconstruction at Salt Lake City scheduled for completion in 2024.

Even as certain long haul flights have waxed and waned at Salt Lake City during the last few years, the airport maintains year-round service to two of Europe’s capitals and hubs for Delta’s SkyTeam JV partners, and Delta has reportedly not ruled out resuming service to Asia in the not too distant future now that it can leverage connections from Seoul, which is the hub of its latest JV partner and fellow SkyTeam alliance partner Korean Airlines.

Salt Lake City International’s history with Delta dates back to the US major airline’s merger with Western Airlines in the late 1980s. Delta opted to build up Salt Lake City in the mid-2000s after deciding to make significant reductions at Dallas/Fort Worth. Salt Lake City remained a hub after Delta’s 2008 merger with Northwest Airlines even as other hubs including Cincinnati and Memphis saw their hub status disappear.

As Delta worked to rationalise the combined networks of it and Northwest, Salt Lake City posted solid passenger growth of 20% between 2009 and 2014 from 20 million to 24 million. 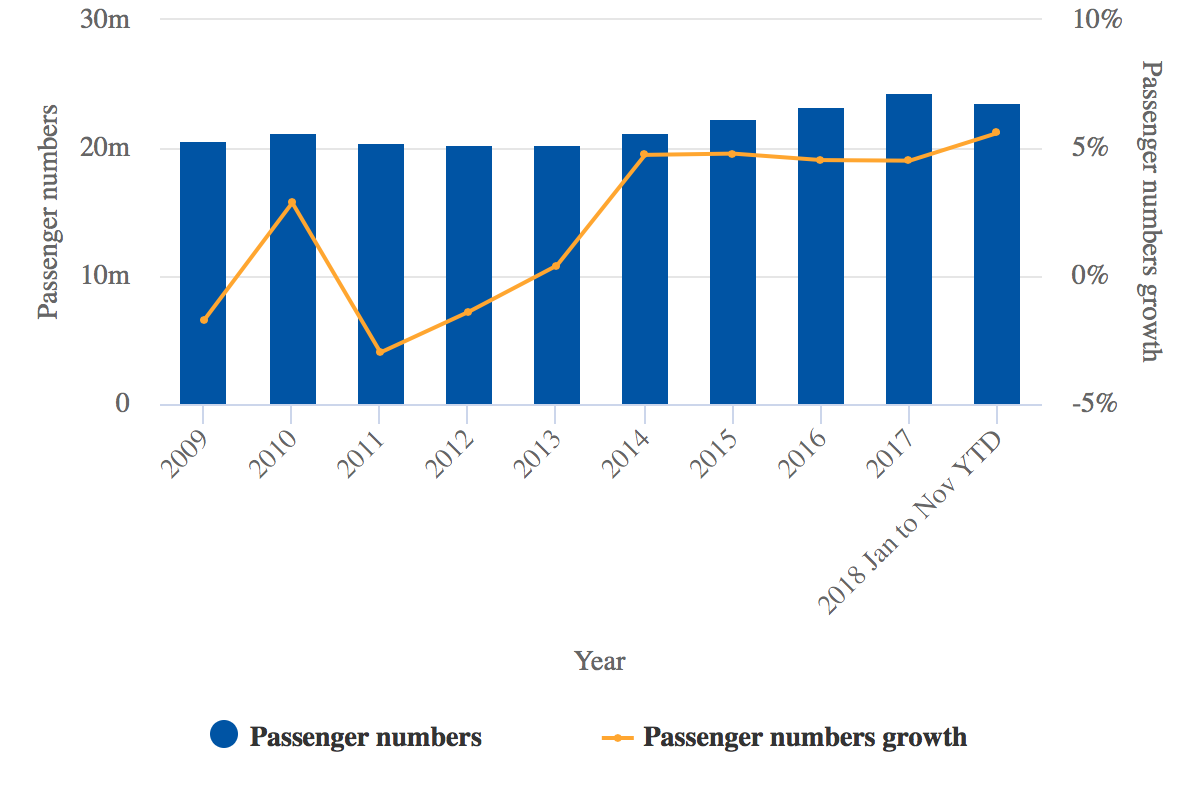 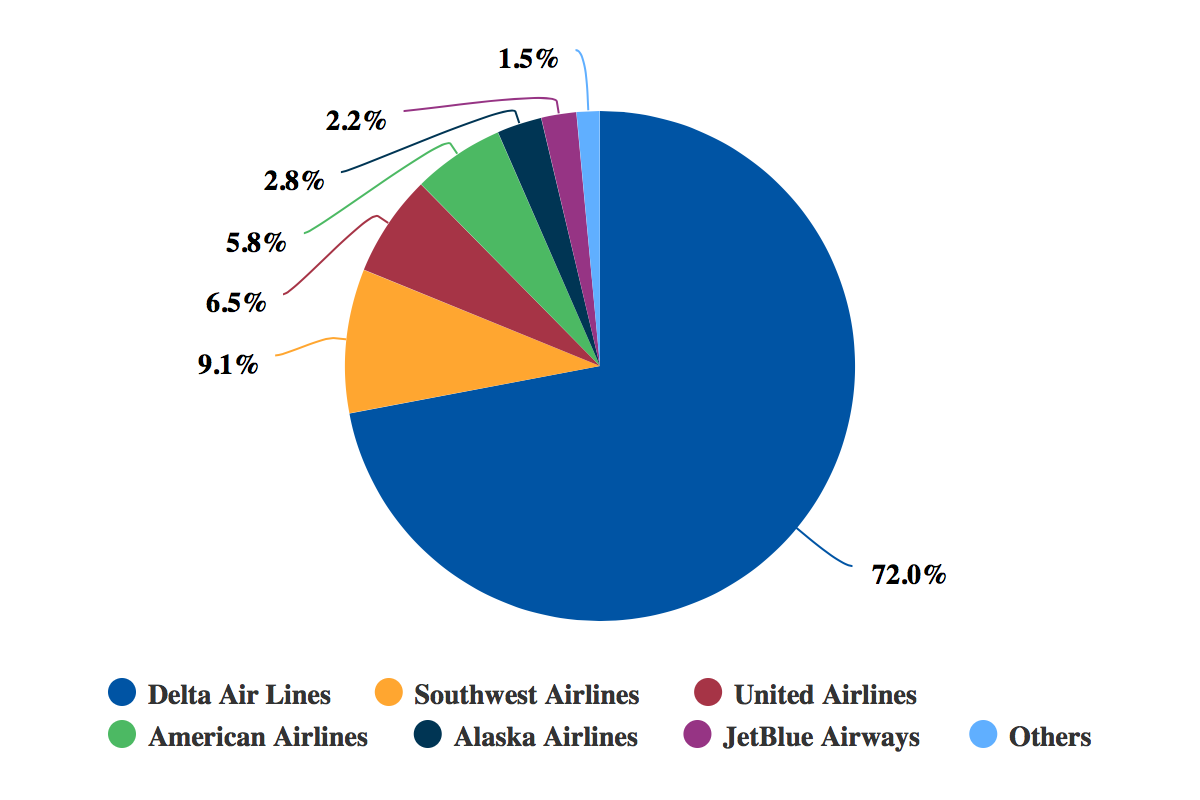 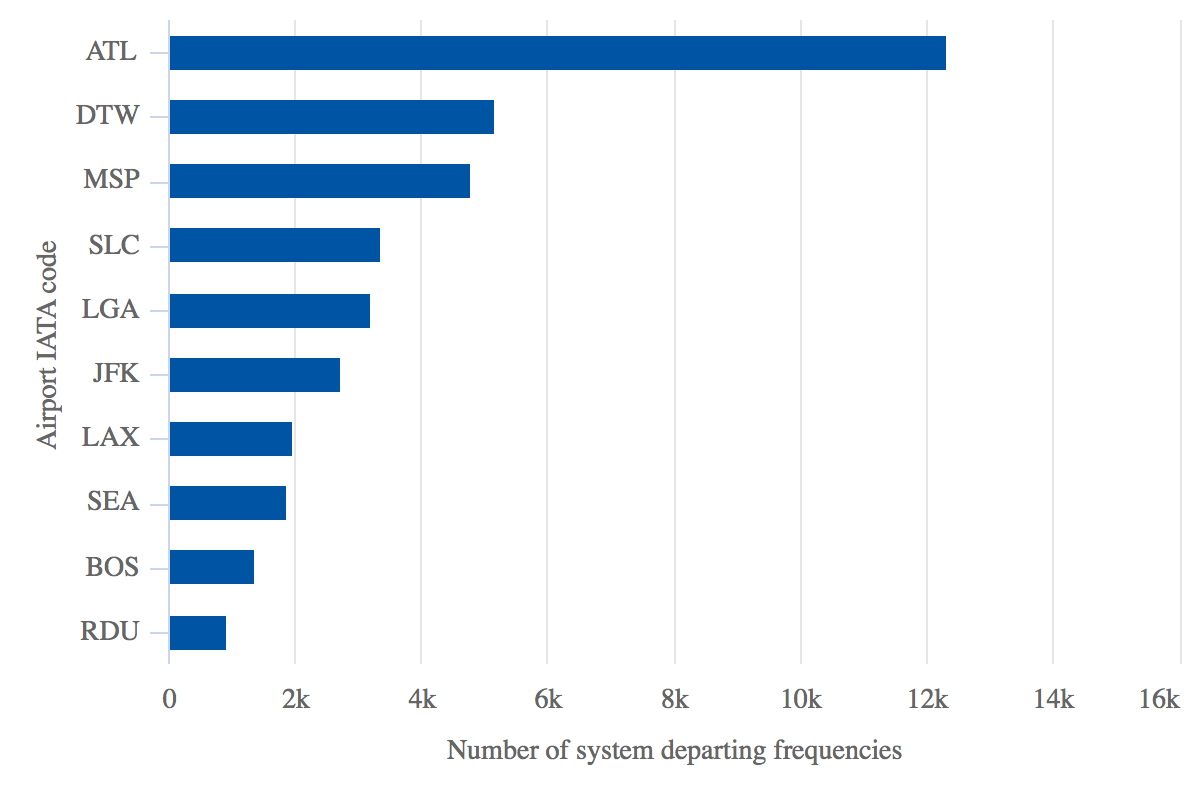 The US state of Utah has a growing economy, and solid population growth, with the bulk of its residents living close the Salt Lake City metro area. For Delta, Salt Lake City offers a connecting point from markets such as Columbus, Ohio (service begins in Jun-2019) to the Western US. For Salt Lake residents, Delta can offer one-stop travel to Asia through its hubs in Seattle and Los Angeles, and blanket coverage to the US east coast.

Although Delta faces delays in starting service with its new 110-seat Airbus A220-100s due to the partial shutdown of the US government, the airline eventually plans to deploy the aircraft on its service from Salt Lake City to Dallas/Forth Worth and Houston Intercontinental.

According to the Salt Lake City Tribune, roughly 53% of Delta’s fights from Salt Lake City are operated with larger mainline jets compared with 37% five years ago, with the average number of seats growing from 97 to 116 during that time period.

Salt Lake City is in the midst of a a multi-year refurbishment program, and Delta has endorsed the project that will include a new terminal, two new concourses and a station for light rail service from the airport.

The airport is funding the expansion through the issuance of bonds, airline, parking and rental car fees and passenger facility charges. It has previously released a breakdown of the project’s budget allocation that includes 41.3% for future bonds and 23% of bonds from 2017. 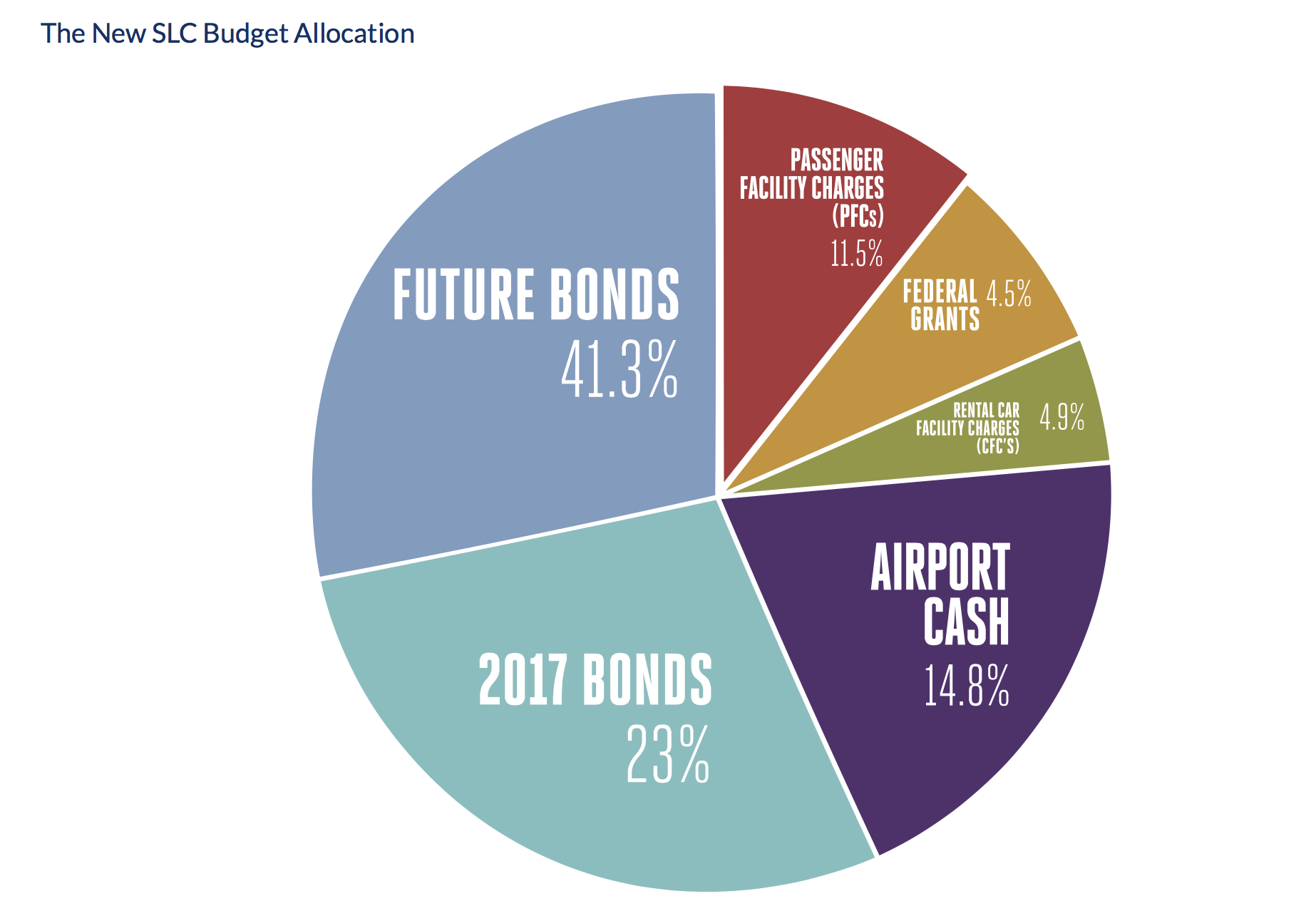 Salt Lake City International is assuring airlines operating from the airport that even after the project is complete, its cost per enplanement would be significantly lower than other US major airports. The airport has stated its cost per enplaned passenger in FY2017 was USD3.53 compared with USD3.69 FY2016.

Quoting Delta CEO Ed Bastian at a recent speaking engagement in Salt Lake City, news outlet Desert News reported the airline's chief executive concluded the airport’s refurbishment and the expansion of its international terminal would improve the passenger experience both on the ground and in the air.

Mr Bastian was also quoted by the publication remarking that Delta could launch a direct flight to Asia from Salt Lake City once enhancements to the international terminal are complete in the US Autumn of 2020.

Delta operated flights from Salt Lake City to Tokyo starting in mid-2009 and then gradually cut back service before eliminating the route in 2011.

Mr Bastian recently told the Salt Lake City Tribune the primary reason those flights did not work for the airline is limited destinations for connections from Tokyo.

Delta has formed an immunised trans-Pacific JV with its SkyTeam partner Korean Air, and Mr Bastian highlighted to the Tribune that Korean offers service to 80 destinations from Seoul. However, he cautioned that Delta was discussing possibilities, and not making any announcements.

Delta inherited the Tokyo Narita hub through the Northwest merger, but has been engaged in a years-long effort to de-hub Narita an downgauge aircraft from Narita. The airline has been working to shift most of its Tokyo service to Haneda and focus on strengthening its connections in Asia through its partnerships with Korean and China Eastern. Delta has a 3% stake in China Eastern, and also has a codesharing pact with the airline.

Salt Lake City's other international long haul flights include Delta’s flights to the hubs of its JV partner Air France-KLM in Amsterdam and Paris, and seasonal flights to London Heathrow.

It is not a stretch to assume Delta and Korean are working together to examine the viability of some sort of service pattern to Seoul, and Delta’s commitment to maintaining Salt Lake City as one of its domestic hubs means that it has to examine how Salt Lake City factors into the overall global network it is building with its partners. In Dec-2018 Delta concluded the JV it launched with with Korean in Mar-2018 was already “a game changer for us in the region”.

Salt Lake City's prospects are promising, but Asia flights are not a given

Prospects for Salt Lake City International continue to look promising as Delta has reiterated its commitment to the airport and its place in the airline’s network.

There’s no doubt the airport would welcome direct service to an Asian gateway in the not too distant future, but it remains to be seen if Delta and Korean will ultimately decide to add Salt Lake City to their collective trans-Pacific network.