Ryanair's shares fell 1.2% yesterday, as its battle with “high cost” airports intensified in the UK.

The LCC announced plans to switch/close nine of its ten Manchester routes to “lower cost competitor airports” in East Midlands, Leeds Bradford and Liverpool, in a move that will result in the loss of 44 weekly Manchester flights and approximately 600,000 passengers p/a.

easyJet's shares were down 3.8%, while SkyEurope's shares gained 23.8% on Monday (17-Aug-09), following Friday’s 22.2% slump. Friday’s slump was based on expectations, which later materialised, that Flughafen Wien would stop servicing SkyEurope's services from 15-Aug-09, due to non-payment of invoices. While the non-payment reflects the LCC’s fragile financial state, the situation is set to improve, with SkyEurope and FOCUS Equity BV on Friday concluding an investment agreement for the injection of equity of up to EUR16.5 million in the carrier.

In the Americas, GOL's shares fell 0.5%, reflecting a reduction in the benchmark Bovespa index, and despite the carrier being raised from “underweight” to “equal-weight” by Morgan Stanley, which cited an improving operational outlook for 2010 on cost controls. Also in the Americas, Southwest shares fell again yesterday, by 4.2%, in the wake of its unsuccessful bid to acquire Frontier Holdings. 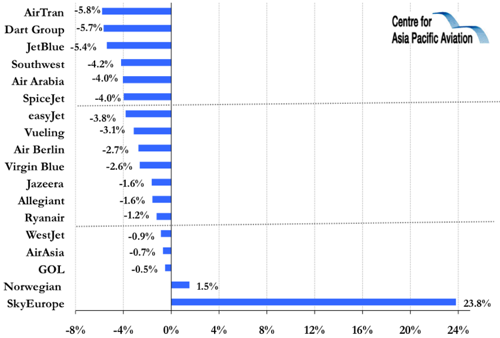