But in a major turnaround Ryanair will base two aircraft at Marrakech and another at Fes while also adding two new Moroccan airports at Essaouira and Rabat as it looks to grows its Morocco operations to 60 routes and eight airports, delivering up to 2.5 million passengers a year to the country.

The decision is in stark contrast to situation in Jun-2012 when Ryanair announced it would cancel 34 weekly flights, about 14% of its capacity, to and from Morocco, claiming ONDA, the state owned airports authority had “reneged  on its agreement with the airline by imposing a new monopoly handling company on Ryanair which would have resulted in a massive increase in charges for the airline”.

The decision by Ryanair first to reduce capacity and now reinstate it offers a significant boost for Morocco’s struggling economy, heavily reliant on European tourism. But it will also put further pressure on state-owned Royal Air Maroc (RAM).

Under a new deal with the Moroccan Government the carrier will add seven new routes from the base to Baden, Bergerac, Cuneo, Dole, Munich, Paris Vatry and Tours between 23-26-Apr-2013.

From Fes, Ryanair currently operates to Brussels, Dusseldorf, Frankfurt, Girona, Marseille, Milan and Paris Beauvais. To these it will add Lille, Nantes on 24-Apr-2013 and Nimes and St Etienne on 26-Apr-2013.

Ryanair has not reinstated any of the routes or capacity that it withdrew in Oct-2012, suggesting perhaps that the those operations were under-performing and, perhaps the dispute was a ploy to extract a new agreement with more concessions from the airports.

Ryanair is the biggest carrier at both Marrakech and Fes. It does not operate from Casablanca, home of national carrier RAM.

Ryanair is the clear leader at Fes, offering 6,048 seats in the week 28-Jan-2013 to 03-Feb-2013, according to Innovata, compared to RAM’s 2,602 offering as the nearest competitor, while easyJet comes in fifth after Air Arabia Maroc and Jetairfly.

Ryanair will have the luxury of being the only operator on Marrakech to Baden, Bergerac, Cuneo Dole and Tours, as well as on the new services from Fes to Lille, Nantes, Nimes and St Etienne.

However St Etienne is close to Lyon which is served by RAM, easyJet, Jetairfly and, from Apr-2013, Transavia. Ryanair’s Nimes operation could also face some competition from Air Arabia which operates from Montpellier.

Ryanair will compete head to head with RAM on Marrakech to Munich where RAM currently operates twice weekly operating a mix of Boeing 737-700 and -800 aircraft.

Morocco has seen substantial growth in its air traffic links, especially to Europe, after it signed the Euro-Mediterranean Air Transport Agreement in 2006 which aligns aviation legislation with key EU rules and regulations and is aimed at progressively opening up market access between Morocco and the EU.

The open skies agreement, along with attractive incentives from ONDA, has resulted in an influx of LCCs to the country. Western Europe accounts for 75% of Morocco’s international seats. France is the biggest market due to strong colonial links, followed by Belgium.

Morocco is cautiously looking to 2013 as the start of an economic recovery in which tourism will play a crucial role.

Encouragingly, total capacity between Morocco and Western Europe is scheduled to increase 21% to 162,169 one-way seats in Jul-2013 compared to Jul-2012 in anticipation that cash-strapped Europeans will begin to travel again.

Most of that capacity growth is being driven by RAM and Ryanair. RAM will increase capacity to 67,830 one-way seats in the peak Jul-2013 season, up 26% on a year earlier.

Morocco’s third largest carrier, Jetairfly (formerly branded Jet4you) is also expanding its Moroccan network with four new routes announced for 2013, including a weekly Nantes-Bordeaux-Casablanca service which will operate from 29-Jan-2013 to 26-Mar-2013. The carrier will also commence operating twice weekly between Paris Orly and Rabat from 01-Apr-2013, a weekly Toulon-Oujda service from 02-Jul-2013 and weekly Rotterdam-Tangier from 28-Jun-2013.

Royal Air Maroc continues its search for a strategic partner

National carrier RAM is the country's largest carrier, offering 135,626 seats a week across its extensive domestic and regional route network within Morocco and Africa as well as to Europe, the Middle East and North America from its Mohammed V International Airport, Casablanca. 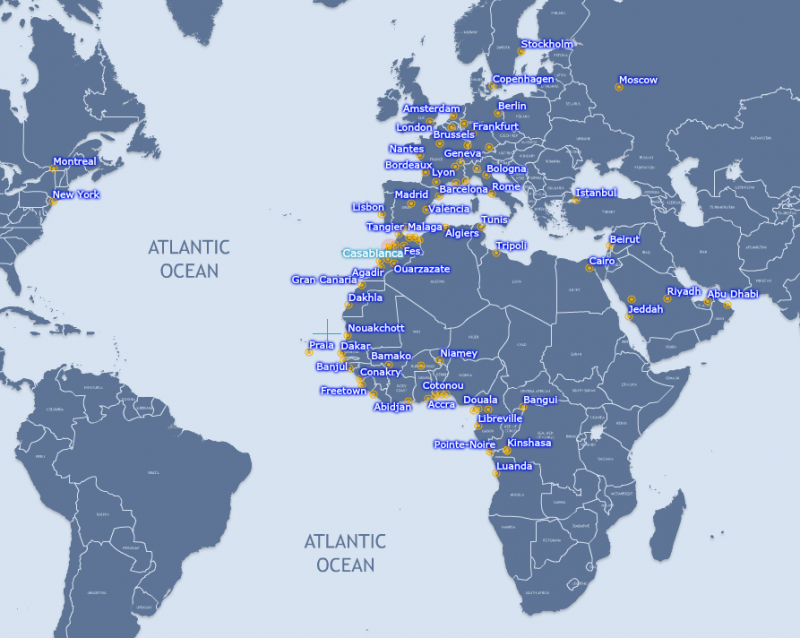 RAM continues to look for a strategic partner after receiving a USD193 million bailout from the Moroccan Government in 2011. An additional USD900 million in public financing is available for the carrier through to 2016.

In Oct-2012 the government was reportedly considering selling a stake of up to 44% in RAM to a major Gulf carrier to increase international tourist connections to China, India and South America. However Moroccan Minister of Industry, Trade and New Technologies Abdelkader Aamara said in Nov-2012 that: "It's obvious that a middle-size airline like RAM needs a strategic partnership with another airline. We will see if it is going to be from the Gulf, from Europe or from America."

The carrier has been hit hard by the arrival of LCCs, including Ryanair and Air Arabia Maroc, on its routes after signing an open skies agreement with the EU. While the agreement allowed the Kingdom to achieve its target of 10 million tourist arrivals in 2010, RAM had been unprepared for the onslaught of competition the agreement would bring. The carrier was also hit by the Arab Spring regional unrest, as well as the general economic slowdown in Europe. As a result RAM was forced to restructure and to improve efficiency and competitiveness in 2011, shedding 1,560 jobs, more than a quarter of the carrier’s entire workforce.

Signs of growth are however beginning to return, with RAM announcing it will redeploy its six Boeing 737-500 aircraft, currently in storage, on services from Casablanca to Barcelona, Berlin, Bissau, Copenhagen, Freetown, Las Palmas, Monrovia, Praia, and Strasbourg from 31-Mar-2013. The aircraft were parked at Agadir Al Massira Airport at the end of 2011.

The carrier will also resume three times weekly Casablanca-London Gatwick service with Boeing 737-800 equipment on 27-Mar-2013. Frequency on the route is planned to increase to 10-times weekly during the peak summer season. It will compete against Air Arabia Maroc which has operated the route since Nov-2012.

Fleet expansion and renewal is also ongoing. RAM has 28 Boeing 737-800s in its fleet of 40 jet aircraft, with another seven on order from Boeing. Five of those are scheduled for delivery in 2013 and the other two in 2014.

RAM also has four Boeing 787s on order with the first expected to be delivered in Dec-2014, the second in Mar-2015 and the third and fourth in mid-2016. The airline is also reported to be considering confirming a fifth option for delivery in May-2017.

Air Arabia Maroc is a Casablanca-based cross border JV between Sharjah-based Air Arabia and Moroccan investors. The LCC operates to 16 destinations throughout Europe as well as six domestic routes. 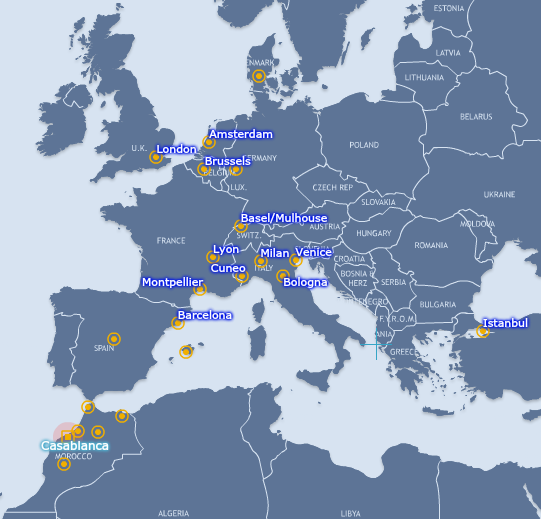 With its fleet of four A320 aircraft, the airline is expanding its network into Europe to take advantage of Morocco's vertical open skies agreement with the EU. The carrier also plans to expand services across North Africa, initially with routes to Tunis, Tripoli and Egypt.

Air Arabia Maroc commenced weekly Marrakech-Montpellier service in Nov-2012, as the sole operator on the route.

Morocco accounts for only about 1% of Ryanair’s total network capacity, but the carrier is critical to the North African nation’s fortunes, where tourism contributes about 7% of GDP. The country needs airlines to drive tourism and the government needs to ensure it keeps cost averse airlines on side.

Ryanair, through its five-year deal with Moroccan authorities, had significantly over-delivered on its undertaking to open at least 20 routes to Morocco and deliver one million passengers per year by the end of the five year period. Six months after accusing ONDA of losing sight of key aspects of their partnership, Ryanair has now committed to more than double passenger numbers to 2.5 million.

After successfully persuading a cantankerous Ryanair to recommit to Morocco, a no doubt relieved Minister of Tourism, Lahcen Haddad says Ryanair’s long-term commitment is the first stage of a comprehensive strategy to build a profitable business based on the huge growth potential of Moroccan tourism over the next decade.