Two extremely aggressive LCCs in Europe are established as the leaders in their geographic areas. Already they are complementing each other nicely, with only limited head to head competition. This raises the intriguing possibility of a merger, at least in one form or another, spawning an irresistible airline force across the region. The two airlines: Ryanair and Wizz Air. Ryanair is globally known, but the younger Wizz less so.

Note: Ryanair and Wizz Air feature extensively in The Centre's upcoming indepth report on how LCCs are reshaping the competitive landscape in Europe and around the world, the Global LCC Outlook 2009 report.

The new force in the east

It’s only five years old, but Eastern Europe’s Wizz Air is already a powerful force, unashamedly modelled on Ryanair. Prior to launching Wizz Air in 2004, the founders considered the two contrasting LCC types, of easyJet and Ryanair. The latter model won.

The two carriers consequently share many similarities, even down to the sort of comments that blog sites deliver – often not flattering, but testament to a single-mindedness of purpose. This airline, like Ryanair, is designed to make money for its (private) owners.

And when last week it was reported that the two were considering plans to transform secondary airport, Paris Vatry Airport, into a low cost terminal, the look-alike became even more poignant. Both carriers currently operate to Paris Beauvais Airport, one of the few airports where they coincide significantly.

Vatry Airport, located near Reims, is said to have capacity to handle seven million passengers per annum, a handy upside, with little cost for the two carriers.

A remarkable pair of route systems

Wizz Air, on a meteoric growth track, today has 11 operating bases in eastern Europe: Katowice, Warsaw, Gdansk and Poznan in Poland, Budapest in Hungary, Sofia in Bulgaria, Bucharest, Cluj-Napoca and Timisoara in Romania, Kiev in Ukraine and Prague in the Czech Republic.

Obligingly, Ryanair does not operate to Budapest, Sofia, Bucharest, Timisoara or Kiev. Even in Prague, where both carriers operate, there is no duplication of city pair routes.

And at the other end of the equation, Wizz does not operate to Ryanair heartlands of Dublin or London Stansted, preferring instead to fly to Cork and to London Luton. Elsewhere in the UK, there is no overlap in airports used; instead they tend to complement coverage, for example on markets to and from Poznan. 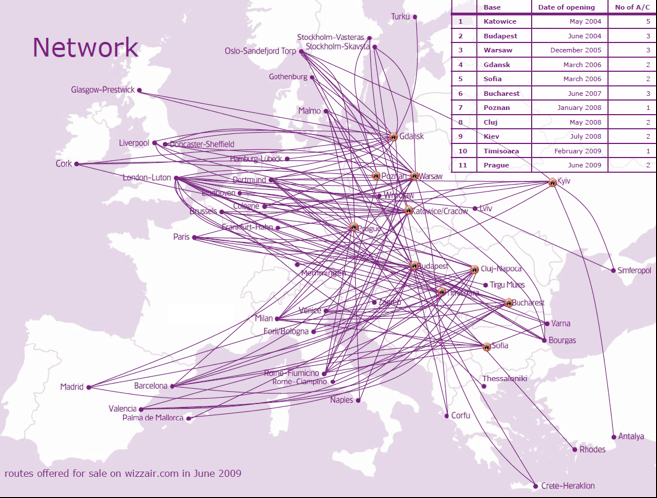 And at points where they do converge, such as Milan, the respective route structures look as if they had been designed by the same network planners – Wizz’s routes point exclusively East and Ryanair’s only overlap is on Krakow, where it operates just a modest four times weekly service, and on Bratislava. Otherwise the overlap is negligible. 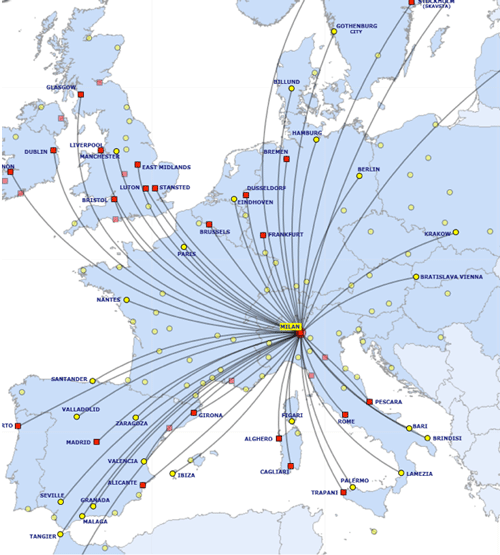 The story is similar at Paris Beauvais: Wizz heads East and Ryanair goes everywhere but. 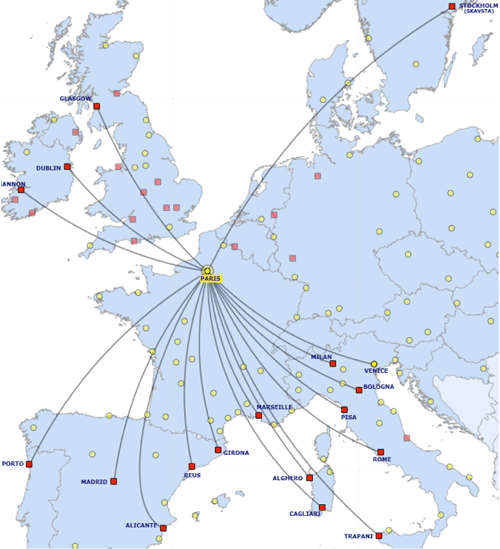 Merger on the cards?

Indeed, Ryanair does meet Wizz Air – quite often. And very good friends they already seem to be. The next question: is there the need for them to formalise a marriage, or can they have more fun with a friendly liaison?

That is why the rumoured step of their investing in airport real estate together has still more interesting connotations of moving in together. Such a move would certainly get the neighbours talking.

Because it could make real sense for Europe’s largest LCC, Ryanair, to merge with an Eastern European LCC during the current downturn, to entrench its position irrevocably and to gain better access to the fast-growing and opportunity-ridden Eastern European market.

Despite previously stating its future passenger growth would be achieved “organically, without acquiring other airlines”, Ryanair has apparently already prepared a friendly relationship with Wizz which could easily provide a platform for something closer.

The options for non-organic expansion in the east are not extensive, if in fact Ryanair does want to spend some of its EUR2+ billion reserves on stamping its presence. (The only other choice would appear to be merger with, or acquisition of, struggling/bankrupt Slovakian LCC, SkyEurope, is a distant outside possibility. But, then again, why not do that as well? - it would at least be cheap.)

Between the two, the carriers are constructing a strong foundation for long term dominance across Europe. According to Wizz Air, the LCC currently has a 27.7% market share in Central and Eastern Europe, followed by Ryanair, with a 19.5% share, based on forward capacity statistics from OAG. 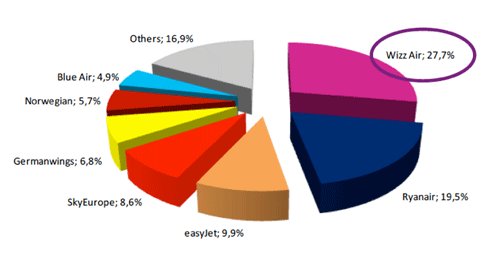 However, when all airlines are included, Aeroflot, S7 and Czech Airlines remain the three largest carriers within the region, with capacity share of 7.7%, 5.1% and 4.7% respectively, ahead of Wizz Air, the fourth largest carrier, with a 4.4% overall capacity share. Ryanair ranks eighth, with a 3.4% capacity share behind Lufthansa, UTAir and LOT, with easyJet, the third largest LCC, ranked 18th.

In addition to being the largest LCCs in their respective spheres, Ryanair and Wizz Air have a few other commonalities: 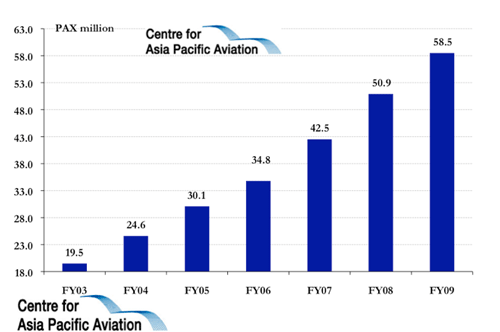 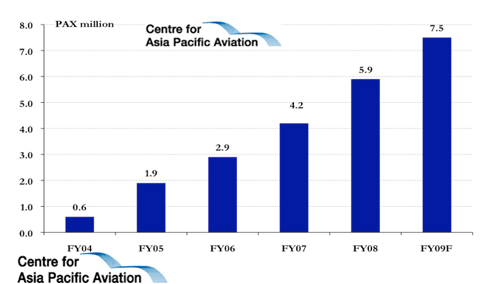 Source: Centre for Asia Pacific Aviation, Wizz Air and Ryanair
^ For the 12 months ended 31-Mar-2010
~ According to Wizz Air and based on OAG Capacity Statistics for Jul-2009

An appealing Eastern and Central European network, with massive upside

While Ryanair currently operates an extensive Western European network, the LCC has, in the past claimed that there is significant scope for future network development. According to Ryanair – and as suggested in the following graph – the upside for expansion is still vast. 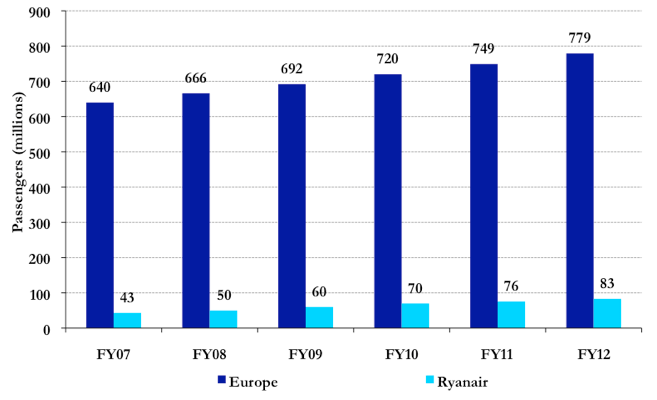 As for Wizz Air, according to CEO, Jozsef Varadi, half of the carrier’s expansion is likely to come from new markets, especially in the former Yugoslavia, Russia, Turkey and Ukraine, with the other half from markets that Wizz Air already serves (coincidentally non-EU markets where bilateral restrictions currently make access for Ryanair difficult). 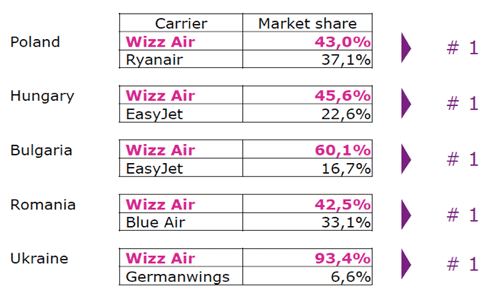 A European vision of the future

As Mr Varadi noted recently about the survival prospects of European carriers, “I don't think it will be more than ten. And besides Ryanair and easyJet, I only see Wizz Air in the low-cost segment”.

Albeit extreme, this scenario does reflect the current challenges facing the European aviation industry; by the same token it also reflects the opportunities that exist for the well-positioned and dynamic LCCs.

A combined Ryanair-Wizz Air operation implies a fleet of some 400 single aisle aircraft by the middle of the coming decade, according to the fleet data above. This compares with a Lufthansa short haul fleet of around a hundred, out of a fleet of 250 (not including its partner airlines). Alternatively, it would be around three-quarters the size of the US behemoth, Southwest Airlines.

And, based on a current eastern Europe market share already of almost 50% and a growing dominance within EU markets, such a behemoth would be near-invincible.

But is merger the answer?

Merging two airlines – even given the clear similarity of outlook and even a little common ownership and control – is never easy. In this case too, there are different aircraft types involved, Wizz Air with its A320s and Ryanair’s B737s (although Ryanair is presently in negotiations with both manufacturers for its fleet growth and replacement requirements after 2014).

And details like finding the right price and ownership structure can be troublesome.

But the underlying force to merge – or not – is founded in whether two like-minded airlines and managements would generate an outcome which greatly exceeds the sum of the parts. Not to mention whether someone else might intervene if the opportunity is not taken.

There are at least some marginal potential benefits. For example, Ryanair – a UK-Irish registered airline - has tried hard to access the very fulsome Turkish market. As with the former Yugoslavia countries, many Turkish bilateral air services agreements with EU states tend to be restrictive, at least in allowing new entrants.  Hungarian-based Wizz Air could open doors.

If in fact Wizz plans to expand into these areas, any Ryanair ownership would have to be ring-fenced so as to avoid transgressing bilateral restrictions on ownership and control. Otherwise both carriers would lose the potential access. But there are ways to do that.

However, it defies belief that a combined Ryanair-Wizz Air operation would in fact fail to deliver massive synergies. Just the thought of its market presence would anyway keep CEOs in Paris and Cologne (not to mention Luton and London) awake at night. And the potential for cross-selling and passenger capture right across Europe would grow exponentially.

Perhaps an operational “merger” could achieve a very similar outcome. However, as separate entities, the carriers would increasingly be dogged by competition authorities as their combined market power grew. An acquisition now would probably slip under the EU’s merger radar – but probably not for much longer. Making a move now would also make it that much harder too for SkyEurope to satisfy its current and potential future creditors, clearing the way for greater regional presence for Wizz Air.

And even the different fleet types would not necessarily be a disadvantage – perhaps even the reverse, as the possibility for purchasing leverage with the two major manufacturers would be so massive. Michael O’Leary already carries a lot of clout at Boeing, but a negotiating lever at Airbus of this sort could also be most welcome.

The two airline groups contain some of the hardest nuts in the world when it comes to low cost airline operation (as well as at least nominal overlap as noted above), so they will hardly have failed to explore all options. Meanwhile, they are in a very comfortable holding pattern in which neither rocks the boat for the other, at the same time as constructing very tidy complementary operations.

Follow the strategic progress of Ryanair and Wizz Air and LCCs around the world each week with The Centre's premium analysis report, Peanuts! Weekly.