CEO Michael O’Leary has continuously stated the carrier has benefitted from the recession. “The old analysis is that in a recession people stop flying, or fly less. In fact it’s not true. They just become much more price sensitive and switch off the high-fare carriers and on to Ryanair,” he said. The carrier added that it expects to continue to gain market share across Europe from the "big three" network carriers – Air France-KLM, British Airways and Lufthansa.

Around 4.3 million pax in weather-affected Dec-2010

Ryanair handled 67.7 million passengers in the 11 months to Nov-2010, representing year-on-year growth of 12.1%. This implies that around 4.3 million passengers were handled in Dec-2010, in a month that saw carriers’ affected by snow-related cancellations at various European airports. Dec-2010 traffic data has yet to be released by the carrier.

Pax and fleet growth slowing but off a large base

Ryanair’s growth trajectory is expected to continue albeit at a slower pace, with 2010 likely to mark the last calendar year of double-digit traffic growth. 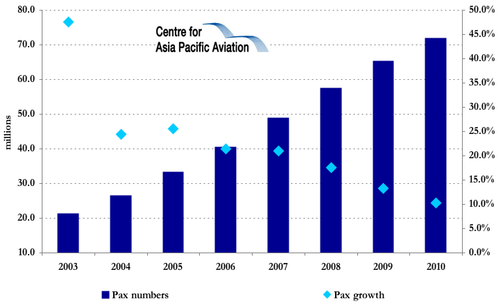 Ryanair, upon the release of its 1HFY2011 financial results in Nov-2010, had stated it expected to report passenger growth of 11% in FY2011 (12 months to Mar-2011) to approximately 73.5 million before growth slows to the single digits. However, Ryanair stated it would continue it growth trajectory, adding 6.5 million passengers in FY2012 and 5.0 million passengers in FY2013. This would represent fleet and traffic growth of 28% by 2013.

Meanwhile, the carrier, also in Nov-2010, raised its full-year profit outlook with the carrier now expecting to exceed the upper end of its previous forecast range of EUR350 million to EUR375 million, to report a profit of EUR380-400 million subject to 4Q yields.