Global LCC share prices were mixed on Monday 01-Nov-2010, as wider indexes mostly gained during trade. LCC news was dominated by the release of financials for Europe’s largest and third-largest LCCs, Ryanair and Air Berlin. Both achieved strong growth in key indicators on the back of recovering demand for travel in the region.

Shares in airberlin closed 3.9% higher as the airline announced EBIT increased 45.5% in 3Q2010 to EUR171.7 million. airberlin, a future oneworld member, announced yesterday it plans to spend up to EUR125 million on the buy back of a convertible bond issue and issue new bonds as part of plans to reduce net debt. airberlin stated it enjoyed "increasingly positive" passenger demand during the quarter.

A trader in Frankfurt stated Air Berlin’s “share price [has] lagged the good development of the airline sector this year and may have some share price potential.”

The Nikkei continues to be dragged down by concerns over the outlook for earnings due to the strong yen. Skymark Airlines, however, is a beneficiary of the stronger yen.

Ryanair was the talk of the town in Dublin on the release of its 2QFY2011 results. The LCC was among the most-traded stocks on the ISEQ and despite impressive growth in key indicators, the share price tumbled 5.3% in New York as results fell short of analyst expectations.

Net profit in the quarter, typically Ryanair’s strongest, increased 32% to EUR313 million on revenue of EUR1.3 billion (+30%). The net profit result was below analysts' expectations of EUR350 million.

Andrew Lobbenberg from RBS described the figures as a "mixed bag", with the LCC’s improved full-year outlook countered by an unexpected rise in unit costs, which rose 17% in quarter. Lobbenberg stated such increases are “not meant to happen at Ryanair". Analysts expect a small profit in 3Q and a loss in 4Q at the LCC over the typically weak winter period. Ryanair raised its full-year profit forecast to EUR380-400 million from EUR350-375 million. 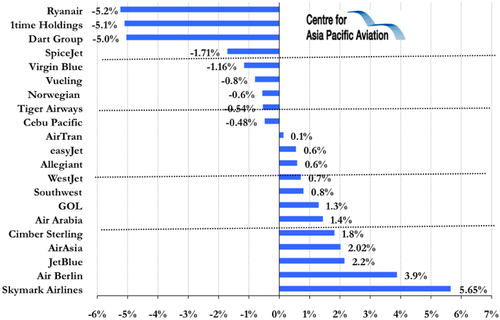