Ryanair, easyJet and Wizz Air's results for calendar 4Q2020 were not pleasant. The three LCCs have performed better than Europe's leading legacy airline groups in the COVID-19 pandemic, so their results provide an upper boundary for the likely performance of the legacies when they report.

Revenue decline for the three LCCs accelerated from 3Q2020, with easyJet suffering the heaviest drop. All of them improved ancillary revenue as a share of the total in 4Q2020, but easyJet is the weakest of the three in this area.

All three are operating minimal capacity while travel restrictions remain tight across Europe, focusing only on cash-generative operations. However, all expect market share gains when demand recovers.

The recovery should present all three with opportunities, although Ryanair and Wizz Air's more aggressive growth plans and lower unit costs may give them an advantage over easyJet.

EasyJet CEO Johan Lundgren will be interviewed on CAPA Live on 10-Feb-2020, and can be expected to be a strong advocate of his airline's strategic position.

The quarter was one of very heavy falls in passenger numbers. EasyJet suffered the biggest year-on-year percentage drop in traffic, -87.1%, approximately 10ppts worse than Ryanair (-77.4%) and Wizz Air (-77.3%).

Load factor dropped by more than 25ppts for all three

The fall in passenger numbers was greater than the cut in capacity for each of the three LCCs, highlighting the difficulty in matching supply to demand at such reduced levels.

In aggregate, the three LCCs suffered a revenue decline of 83.6% year-on-year in the quarter. This compares with a collective 66.9% fall in revenue in calendar 3Q2020. 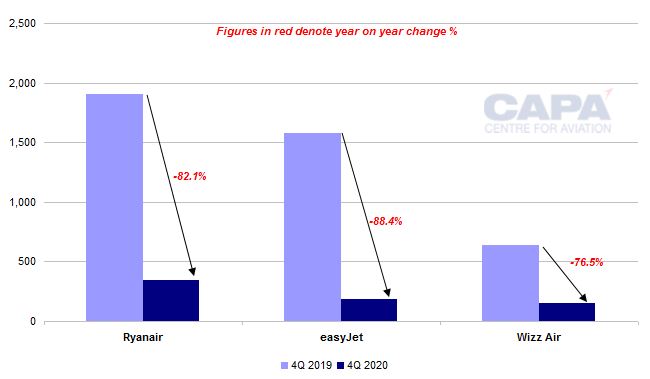 All three made progress with ancillary revenue in 4Q2020

The performance of ancillary revenue reflects the relative weakness of ticket revenue at a time of very low demand. Nevertheless, for Wizz and Ryanair in particular, this strong share from ancillaries is a strength that will serve them well in the recovery. EasyJet is aiming to grow further in this area too.

Aggregate operating losses were higher than revenues in the quarter

The low cost airlines were not able to cut costs in line with the collapse in revenue, in spite of their best efforts, resulting in massive losses.

The aggregate operating loss of the three LCCs was EUR940 million in 4Q2020, which was more than double the loss of EUR432 million in 3Q2020.

In a normal year, the bulk of the annual operating profit is made in the third quarter, while the seasonally quieter fourth quarter is somewhere around break-even (in 4Q2019, the three made an aggregate operating margin of 2.9%).

EasyJet reported the lowest margin among the three, -256.4%, based on its headline pre-tax loss of GBP423 million (it did not report a figure for operating result in the quarter). 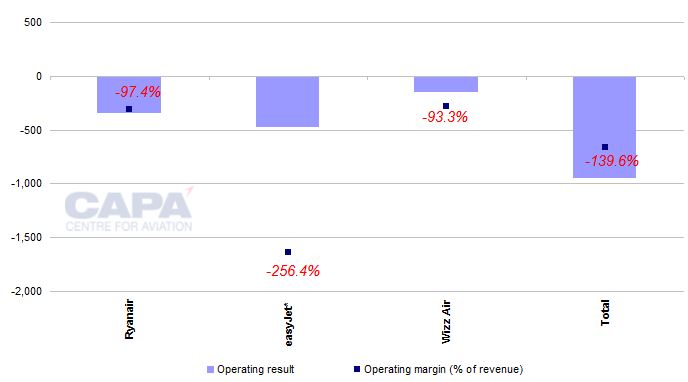 All three have healthy liquidity

The two ultra LCCs had stronger liquidity at the balance sheet date of 31-Dec-2020.

EasyJet did not report balance sheet data for 30-Dec-2020, but reported that it had total available liquidity of GBP2.5 billion at 25-Jan-2021, including a new GBP1.4 billion loan, partly backed by UK Export Finance.

All three airlines have healthy levels of available liquidity to help them through to the time when demand can recover.

None is immune to the need to raise further funds if the recovery is delayed beyond the summer, but they all have investment grade credit ratings and access to equity capital markets.

EasyJet has already completed a significant sale and leaseback programme, so may have slightly reduced options to raise further funds in this way (38% of its fleet is unencumbered, compared with 80% for Ryanair).

They are all currently operating at very low capacity levels (easyJet and Ryanair are below 10% of 2019 seat numbers and Wizz Air at approximately 15% in the first week of Feb-2021, compared with an average of 26% for Europe, according to data from CAPA and OAG).

However, when travel restrictions ease they expect to take advantage of their competitors' more cautious approach to returning capacity into the market, and to take market share.

In this respect, Wizz Air and Ryanair appear to be more aggressive than easyJet. They have lower unit costs, allowing more flexibility to drive demand with lower fares, and more ambitious fleet growth plans (easyJet is planning fleet reduction in FY2021).

However, Ryanair's and Wizz Air's fleet plans also involve an increase in the average number of seats per aircraft in the fleet (Ryanair's MAX will have 197 seats, compared with 189 for its existing fleet; Wizz Air's fleet growth will focus mainly on A321neos and the airline will increase its average seat count from 205 in FY2021 to 229 in FY2026).

This growth in aircraft size, in addition to fleet growth, will give Ryanair and Wizz Air additional unit cost reductions.

The recovery should present all three with opportunities

It does seem that the massive capacity retrenchment of legacy airlines, and their traditionally less nimble approach to market entry and exit, should give all three LCCs opportunities to grow market share.

Moreover, it should provide space in the European market for all three to achieve this without significant head to head competition between them.

EasyJet CEO Johan Lundgren will be interviewed on CAPA Live on 10-Feb-2020. For more details and to register for this event, please go to the following link: https://centreforaviation.com/events/live