Shares in Ryanair were down 1.9% yesterday. Earlier it reported a 13% year-on-year increase in passenger numbers to 5.8 million in Jun-2009, with a 1ppt load factor improvement (to 85%). Ryanair transported 60.2 million passengers in the 12 months to Jun-2009, a new record for the carrier, which is now on course to carry 67 million passengers in its full year.

Norwegian Air Shuttle shares also slipped 4.7%, as the carrier reported a 2% yield reduction and 4% unit revenue reduction in Jun-2009. Passenger numbers increased 15%, as the carrier continues on its expansionist path, while load factor slipped 1 ppts to 79%, as the carrier’s capacity increases outstripped demand.

Across the Atlantic, AirTran gained 2.9%, while Southwest and Allegiant rose 1.5% and 1.2%, respectively after the 4th of July break.

Shares in the major Asia Pacific LCCs slipped again on Monday (06-Jul-09), with SpiceJet, Virgin Blue and AirAsia all down, by 5.9%, 3.4% and 2.7%, respectively, reflecting general weakness in Asia Pacific markets.

Also on 06-Jul-09, AirAsia requested shareholder approval for the provision of financial assistance to its Indonesian and Thai subsidiaries. As at 31-Dec-2008, AirAsia had provided a hefty USD100 million and USD70 million, respectively, to its units. The carrier is also proposing to enter into Financial Assistance Agreements with its 49%-owned subsidiaries, to formalise the provision of the funds. 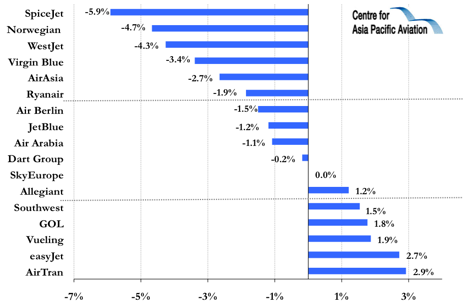