To keep travel time manageable, all but one of the stadium venues are in European Russia, west of the Ural Mountains.

Future tourism prospects are front of mind, and equally, any negative reports about Russian intentions concerning the Baltic States can be contained by the holding of matches in Kaliningrad (western, between Lithuania and Poland).

The level of investment and expenditure suggests that the Russian government is satisfied with the current state of the airports, and the sport facilities.

This report examines the improvements that are (and sometimes aren’t) being made to the airports that will handle the comings and goings of fans from all over the world, and contrasts the efforts being put into building or rebuilding the stadiums.

Nearly all the games are in the west of the country

To keep travel time manageable, all but one of the stadium venues (Ekaterinburg - also known as Yekaterinburg) are in European Russia, west of the Ural Mountains.

This means that supporters will be denied the opportunity to watch a game in the delightful surroundings of cities like Vladivostok, within 100 km of North Korea, or the even more isolated Magadan, one of a number of smaller Russian cities where the main street is still named after Lenin. 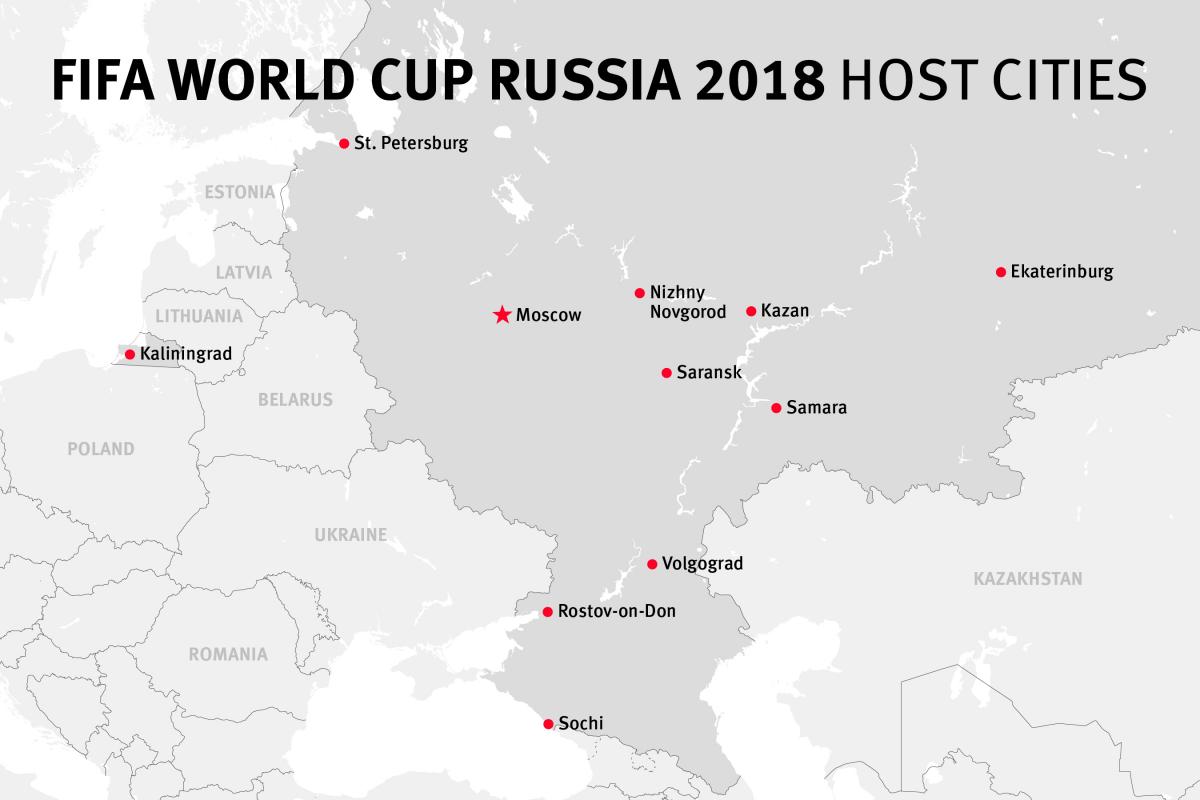 That organisation of the cup games is both understandable and typical.

For all governments the Soccer World Cup, as with the Olympic/Paralympic Games, is an opportunity to show off the best of the country, but it also means that the authorities will seek to avoid negative publicity. They don’t want visitors to see poorer, more basic parts of the country, and to struggle to do so anyway because of the lack of accessibility.

Future tourism prospects are also on the agenda, which is possibly why historic Samara, and Sochi (on the Black Sea coast, host to both the Winter Olympic and Paralympic Games in 2014, and the Russian Formula 1 Grand Prix through to 2020), are venues.

Equally, negative reports about Russian intentions concerning the Baltic States can be assuaged by holding matches in Kaliningrad, the Oblast (enclave) between Lithuania and Poland.

Infrastructure is key to the success, or otherwise, of the event. Just about every one of the stadiums has either been completed or refurbished since 2013, with a few remaining to be completed this year. In the most recent World Cup in Brazil there was a rush to do so before the event began, and the Russian authorities will be keen to avoid a repeat, with both the match venues and the airports that serve them.

In some cases, the selection of the venue seems to have been determined by the airport. Saransk, for example, was a surprising choice. Nearby Krasnodar was overlooked, despite being acknowledged as a ‘football-loving’ city. But a newly completed airfield, a reconstructed terminal and an additional temporary one are available at Saransk, both for receiving foreign visitors and ferrying them away quickly to the bright lights of Moscow after the match. Krasnodar has a reconstructed runway (mid-2017) but is awaiting a new terminal building.

In Moscow, where the final and one of the semi-finals will be played, there has been construction activity at most of the airports under the banner of the Moscow Hub Airport Development Project, though not only with the World Cup in mind. A new terminal and runway will be constructed at Sheremetyevo Airport, but not until long after the World Cup is over. A new runway, terminal and hotel are scheduled for the privately operated Domodedovo Airport too, though again – not in the immediate future.

Vnukovo Airport has no specific construction projects; perhaps surprisingly, as it is the highest airport and often used as an alternative in certain weather conditions, and also because it can handle general aviation demands. The newest airport, Zhukovsky, which is handling mainly LCC traffic, will have its terminal expanded by a consortium led by the Lithuanian investor Gediminas Ziemelis, but it may come too late for the sporting event.

Then again, the government may consider that the Moscow airports are sufficiently well developed anyway to handle any demand surge, and that attention should be focused on smaller airports.

Pulkovo counts as a ‘smaller’ airport in (Moscow-dominated) Russian aviation

Remarkably, those ‘smaller’ airports include St Petersburg’s Pulkovo Airport, as Moscow handles about half of Russia’s air traffic.

There has been a change of ownership at Pulkovo over the past few years, with the Russian Direct Investment Fund, Thalita Trading, Fraport AG, and the Qatar Investment Authority now all having similarly sized stakes.

There will be some pressure on the old and new owners as St Petersburg, Russia’s second city, hosts the other semi-final and the 3rd/4th place play-off match. (Thousands of supporters missed a semi-final game in Durban during the World Cup Finals in South Africa in 2010 after the newly opened King Shaka Airport became clogged with private jets.)

Even then there are no permanent construction projects at Pulkovo. Consultation on the second phase of terminal development concluded in Oct-2017. The existing terminal could reach maximum capacity with an expectation of growth in passenger numbers to 25 million per annum by 2020.

However, a storage building has been converted into a temporary passenger terminal ahead of the World Cup, with 50 additional passport control stands.

Construction at other Russian airports

In general, it appears that nothing like as much money, or urgency, is being thrown at airport infrastructure as occurred in Brazil in 2014. There at least much of that investment led to enduring benefits, unlike much of the expenditure on iconic stadiums often is.

On the other hand, the Russian authorities can be confident, with the much increased participation of private sector concerns in the past five years or so, that airport infrastructure is in reasonably sound shape already, and where necessary can be augmented by something as simple as a temporary terminal.

Visitors will be there to watch “the beautiful game” in attractive stadiums. Airports are just a means to an end.