Russia-Ukraine conflict not yet visible in European airline schedules

Russia's invasion of Ukraine is not yet visible in airline capacity data for Europe. Yet many European nations have closed their airspace to Russian operators and Russia has reciprocated by banning airlines from 36 countries. Moreover, virtually no airlines are operating to/from Ukraine.

Nevertheless, data based on schedules filed by airlines indicate that Europe's 27.8% capacity shortfall to 2019 levels in the week of 28-Feb-2022 is 3.2ppts better than last week and the fifth straight week of improvement. This lifts Europe off the bottom of the regional ranking and above Asia Pacific, where capacity is down by 30.3%.

Looking ahead, capacity projections do not appear to reflect the Russia-Ukraine conflict. Europe's capacity for all of 1Q2022 is scheduled at 75% of 2019 levels, rising to 91% for 2Q2022 and 94% in early Aug-2022. Reduced operations in Russia, Ukraine and on Europe-Asia routes over Russia will surely dent these projections. Nevertheless, CAPA analysis suggests that the impact of the conflict on Europe's capacity recovery may be bounded.

In the week commencing 28-Feb-2022 total European seat capacity is scheduled to be 20.2 million, according to OAG schedules and CAPA seat configurations. This is 27.8% below the 28.0 million seats of the equivalent week of 2019. This is 3.2ppts better than last week and an improvement of 12.7ppts over the past five weeks.

This week's total seat capacity for Europe is split between 5.8 million domestic seats, versus 7.3 million in the equivalent week of 2019; and 14.4 million international seats, versus 20.8 million.

Europe is off the bottom of the ranking of regions measured by seats as a percentage of 2019 levels this week, replaced by Asia Pacific.

Europe, the Middle East and Africa have taken upward steps in the trend this week, whereas North America has taken a downward step.

With only three weeks remaining in the quarter, schedules for 1Q2022 currently project seats at 75.0% of 1Q2019 levels. This is down only slightly from 75.2% projected a week ago.

Capacity projections do not appear to reflect the Russia-Ukraine conflict

These very small downward revisions to capacity projections derived from airline schedules filed with OAG are consistent with the pattern shown throughout the coronavirus pandemic, whereby airlines have trimmed their plans as the time of departure draws nearer.

Schedules data for Europe do not appear to reflect the possible impact of the crisis of Russia's invasion of Ukraine.

Figures from OAG and CAPA project a steady increase of more than 14 million weekly seats in Europe between the start of Mar-2022 and the first week of Aug-2022 (typically associated with the summer peak).

Neither Russia nor Ukraine schedules currently appear to reflect the possibility of vastly reduced capacity in the coming weeks.

Weekly seats in the Russian Federation are projected to grow by just under 900,000 by the start of Aug-2022, and Ukraine capacity is scheduled to grow by almost 600,000. 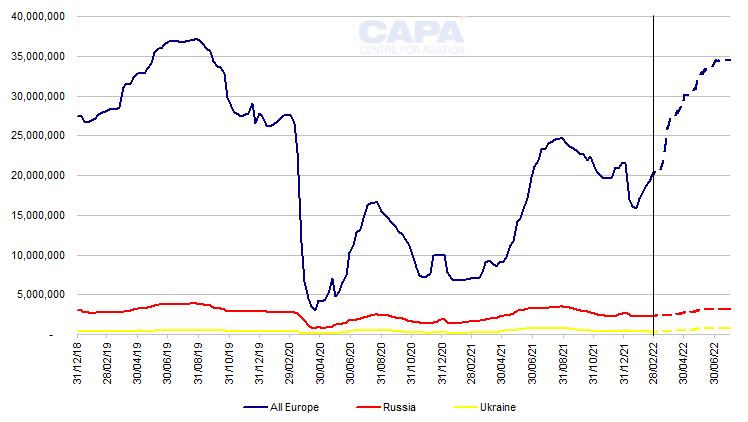 The EU, UK, Norway, Iceland and other European nations have closed their airspace to Russian operators, and Russia has closed its airspace to airlines from 36, mainly European, nations. No commercial flights are currently operating to/from Ukraine.

If flight bans to/from Russia are extended to more countries, it is possible that there could be an effective total closure of airspace to and from both Russia and Ukraine. This could have a noticeable impact on Europe's capacity recovery.

In 2019 Russia accounted for approximately 10% of Europe's seats – a share it has exceeded since the start of the pandemic (reaching as much as 25% on occasions) due to the buoyancy of its large domestic market.

Ukraine is considerably smaller, but at more than 1% of Europe's seats in 2019 (and up to 5% at times during the pandemic), it is not insignificant.

Russian Federation and Ukraine: weekly seats as a percentage of total Europe capacity, Jan-2019 to 28-Feb-2022 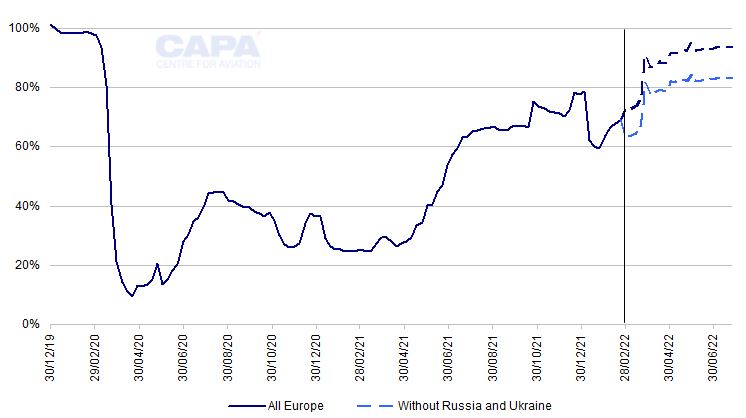 …falling to 83% if all Russia and Ukraine capacity is removed

If all capacity to/from/within the Russian Federation and Ukraine were to be removed from this, the first week of Aug-2022 would be reduced to just over 83% of 2019 levels.

This is probably an extreme scenario, since Russia's domestic market – projected at 62% of the total in early Aug-2022 – seems likely to continue broadly unaffected (whereas 98% of Ukraine capacity is international, which seems likely to cease).

Adding back domestic Russian capacity would leave total Europe capacity at 89% of 2019 levels.

Europe-Asia flights over Russia are at risk, but Europe-Asia is not driving the recovery

A further factor to consider is the impact on Europe-Asia flights that fly through Russian air space and may be diverted, or even cancelled. For those that operate in this route region, the impact could be significant.

However, on a Europe-wide level, it may not be huge. Europe-Asia Pacific capacity is not really driving Europe's recovery.

Impact of Russia-Ukraine on Europe's recovery may be contained

Of course, none of this takes account of any negative impact on sentiment towards flying more generally, or of any possible broadening of the conflict.

The uncertainty created could not have come at a worse time, just as European aviation's recovery was gathering momentum.

Nevertheless, the impact of the Russia-Ukraine conflict on Europe's capacity recovery may well be a contained one.