Royal Jordanian to take delivery of new aircraft in May-2010; Most African carrier stocks steady

Lonrho (12.5%) rebounded on Tuesday (18-May-2010) due to a non-aviation related matter involving the purchase of a remaining 49% stake in fresh foods supplier Rollex for GBP4.2 million by Lonrho’s Agriculture division which adds to its previously acquired 51% stake.

In other aviation related news from Lonrho, Fly540 announced plans to launch daily Nairobi-Kakamega service on 18-May-2010.

Elsewhere in Africa, Comair and Kenya Airways remained steady, while 1time (2.8%) rose along with the Johannesburg Stock Exchange (+0.98%).

Air Arabia and Royal Jordanian’s shares were steady. Royal Jordanian announced during trading that it will take delivery of an A330 aircraft on 24-May-2010. 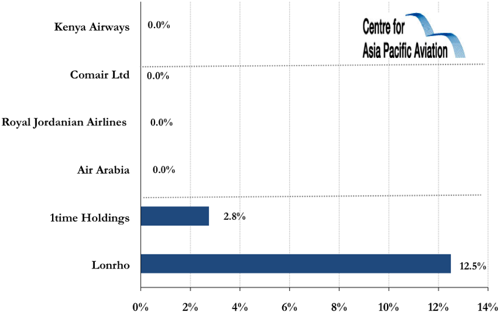