Royal Jordanian (+1.3%) shares slightly rose after announcing its passenger numbers were up 14.6% in Jul-2010:

Royal Jordanian President and CEO, Hussein Dabbas, stated the carrier is witnessing high demand over the summer season, with traffic growth also evident for this month and Sep-2010.

Meanwhile, Kenya Airways (0%) announced plans to increase domestic and regional services with an additional B737 aircraft, on lease from KLM. The carrier stated the aircraft will be initially put into operation on Nairobi-Mombasa services. 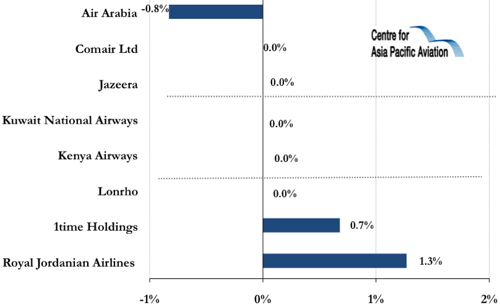