Royal Jordanian reported a 17% year-on-year decline in profits in 1Q2010, to USD9.6 million, due to higher fuel prices. Fuel costs rose 15% for the period, with an average price of USD80 per barrel.

The decline in profit came despite a 21% increase in passenger numbers during the quarter. RJ reported a net profit of USD40.3 million in 2009, compared to a net loss of USD34.8 million in 2008. The carrier is targeting a 12% increase in revenue this year. Its shares rose 0.6% yesterday.

In Africa, Kenya Airways (+0.9%) was the only carrier to witness a rise in shares during the session, despite a 0.5% decline in Kenya’s Nairobi Stock Exchange. 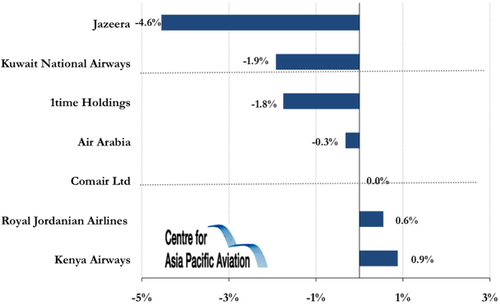