Among what is an increasing number of positive statements being made by airport managers about infrastructure investment, Latvia's Riga International Airport has committed to sticking with its ‘sustainable’ investment plan, so that it can compete with other airports with the aim of becoming a Northern European air traffic hub.

During the summer of 2020, with the support of the (EU) Cohesion Fund and its own funds, a number of large-scale investment projects worth more than EUR15 million were implemented at Riga Airport.

With so many competitors for that mantle across the region, Riga has got its work cut out, but the direction airBaltic has taken, especially with its fleet selection, could help the airport towards achieving that goal.

The potential is for Europe-Russian Federation hubbing and the development of long haul, with associated short haul feed, and airBaltic is well placed to do the former, having centralised its fleet on the A220 (the old Bombardier C-series). The airline is well positioned to set up a regional ‘low cost’ hubbing operation that could challenge the majors at their legacy hubs.

A recent CAPA report featured Helsinki Airport and its determination to proceed with a capital investment plan worth EUR1 billion. Helsinki does so as other Nordic region airports shape up to try to gain pre-eminence, by aggressively seeking new business from other airports if they can get it.

Despite the current crisis in the aviation sector, Riga Airport is maintaining its strategic future goal to become a Northern European air traffic hub, according to the Chairperson of the Airport Board Laila Odiņa.

To do so Riga will have to compete with airports at Helsinki, Stockholm, Copenhagen and Oslo in the Nordic countries, together with the smaller but growing airports at Tallinn and Vilnius in the Baltic countries, the new airports at Berlin and (eventually) Warsaw, and possibly even St Petersburg in Russia.

Ms Odiņa said, "This crisis has given us some extra time to prepare for new challenges. By investing in the development of state-of-the-art infrastructure solutions today, in the future it will be possible to organise work more efficiently and reduce costs per serviced passenger or aircraft, which will boost the airport's competitiveness both in terms of costs and environmental sustainability".

Projects have been implemented during the summer of 2020

During the summer of 2020, with the support of the (EU) Cohesion Fund and its own funds, a number of large-scale investment projects worth more than EUR15 million were implemented at Riga Airport.

The airport reconstructed and upgraded a part of the runway and taxiways over a length of over 11 kilometres, and it built a helipad and new aircraft and helicopter stands. These investments will not only enable Riga Airport to increase its operational capacity and but will also make the airport more environmentally friendly, reducing CO2 emissions and saving resources.

A new cargo apron with underground hydrant systems and multi-category aircraft stands will start operating this autumn (2020), which, together with the future development of the cargo logistics centre, will allow Riga Airport to double the volume of cargo handled, reaching 60,000 tonnes per year.

The international logistics company DHL has already started the construction of its regional parcel handling and sorting centre in the territory of the future RIX Cargo City. Another 15,000 square metres of land where it is possible to develop cargo handling and servicing warehouses in an area of up to 9000 square metres is awaiting investors.

The airport is also continuing work on the new passenger terminal project so that it can start as soon as the company's business results allow.

"The airport is expected to restore the number of passengers served before the crisis in a few years. This is also confirmed by the development plans of airBaltic's updated business plan. Insufficient airport capacity cannot be an obstacle to the implementation of these development plans in Riga”, Ms Odiņa says. She also emphasised that the new epidemiological safety requirements are likely to persist in the long term, and that the airport will need additional space to implement these standards without compromising airport capacity and service quality.

According to the CAPA Airport Construction Database, Riga Airport has commitments covering ‘Terminal enhancements/Business Aviation Centre/new ATC’ through to the end of 2023, valued at USD126.5 million.

Sustainability – the airport will give weight to sustainable solutions

Ms Odiņa equally emphasised that both now and when planning future development, the airport pays great attention to sustainable solutions, including assessing the possibility of attracting structural fund projects that will be available to Latvia in the next European Union budget planning period until 2027.

This EU funding should be used to purchase both sewage infrastructure and equipment that uses alternative fuels in its work, such as electric apron buses, specialised apron equipment, and electric cars to be used on a daily basis to perform airport functions.

Ms Odiņa's philosophy is, "If a company thinks about sustainability in all its aspects – environmental, social and economic – it becomes more efficient in processes and use of resources, acquires motivated and loyal staff and becomes more attractive to future employees. This improves the operating results and thus gives a direct benefit to the business."

The airport is among the sustainability ‘veterans’ in Latvia – it has been participating in the Sustainability Index assessment since 2011, and for the second year in a row has the highest – 'Platinum' status.

So how does Riga shape up as a hub now? The present moment is not entirely appropriate for comparative analysis, but some insights can be acquired.

A short haul hub now, and likely to remain one

The current route map paints Riga as a short haul airport with no intercontinental flights – hence, no direct connections to Asia, the Americas or Africa.

For Riga, as the main airport for the Baltic region, the restart of mid and long haul services cannot come soon enough.

In the short haul arena some of the cities shown here, 14 of them, come online in mid Oct-2020, by way of a new Wizz Air base.

However, that was the end of the collapse with the exception of a single week of relapse, and capacity climbed back up to 94,000 in the week commencing 07-Sep-2020 – the highest it has been since mid March, and approximately 63% of the previous level.

AirBaltic is the principal airline at Riga, despite foreign LCC competition

AirBaltic, which lies somewhere in that no man’s land between LCC and hybrid airline, currently enjoys a degree of superiority over low cost rivals that include Ryanair, Wizz Air, Wizz Air UK and Norwegian Air Shuttle, and that is unusual for a state flag carrier in Europe (it also acts as the de facto ‘national’ airline for Estonia and Lithuania).

The company temporarily suspended operations on 17-Mar-2020 due to the pandemic, and flights only restarted on a limited basis from 18-May-2020. 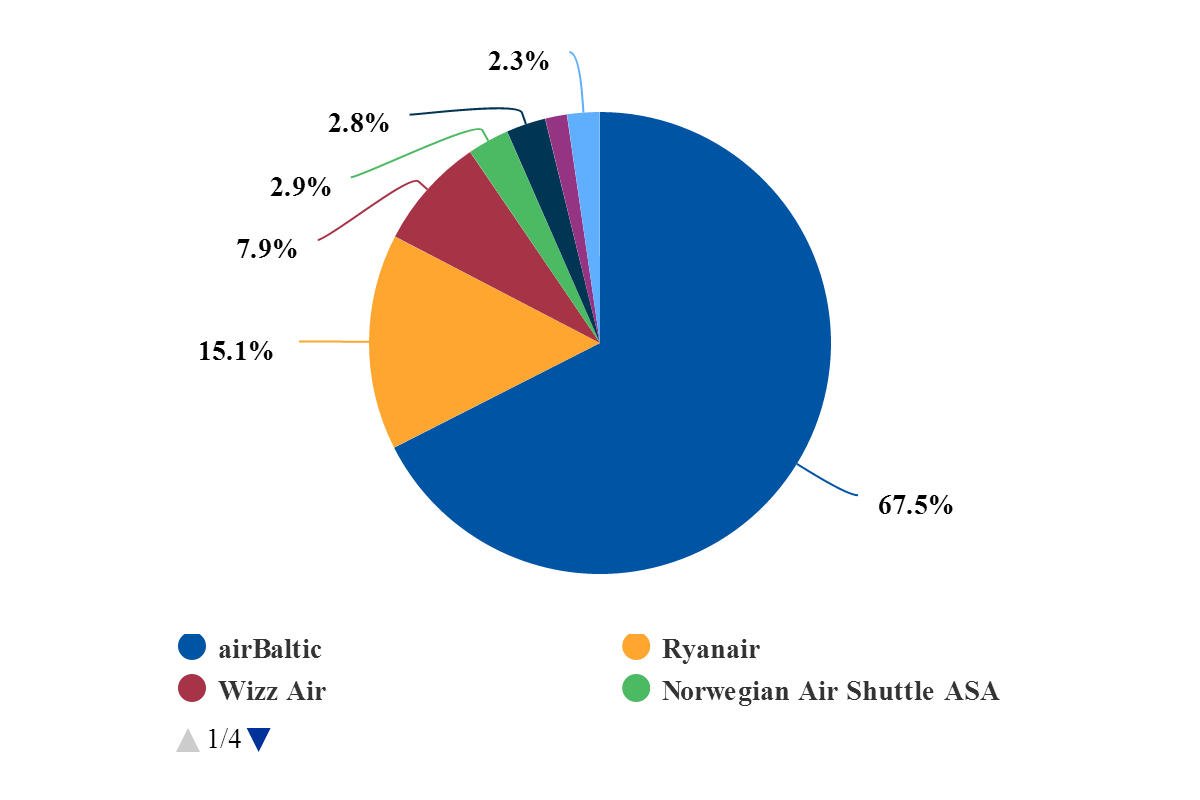 In terms of aircraft movements, airBaltic's strength is even more obvious, as it has a percentage ratio of 87.4% in the peak period.

Riga is a west-east hub already, but there is complex

At Riga 76% of departing seats are to Western Europe and 24% to Eastern Europe (including CIS), so the airport undoubtedly operates as a west-east ‘connecting point’. Moreover, it does appear from the allocation of departing and arriving seats per hour that there is co-ordination (chiefly by airBaltic) which suggests the basic hub foundation has been laid.

On the other hand, there are many such west-east hubs (Frankfurt, Munich, Zurich, Vienna, Prague, Copenhagen etc.), and most are more central to the European continent.

The right aircraft at the right time

The potential is for Europe-Russian Federation hubbing and the development of long haul, with associated short haul feed.

Regarding the former, airBaltic is well placed to do just that, having centralised its fleet on the A220 (the old Bombardier C-series), of which it has 21 in service and 28 on order. Meanwhile it has deactivated its turboprop fleet, which it used to fly to the limits of its range.

There is both similarity and dichotomy between Riga’s low cost and alliance airline capacity. Low cost accounts for 95% of capacity (airBaltic is treated as an LCC here), and unaligned airlines also account for the same amount, with the biggest alliance being Star, with just 4% of capacity.

In other words, there is nothing at all to say that Riga is any sort of hub if one accepts that LCCs generally do not engage in hubbing.

But with the 160-seat A220 that airBaltic has standardised on, which is fuel efficient and can fly as far as the A320, and which has also become popular with many airlines in recent months, that airline is well positioned to set up a regional ‘low cost’ hubbing operation that could challenge the majors at their legacy hubs mentioned earlier.

As for long haul, an important question is whether there is enough point-to-point traffic to underwrite long haul-to-short haul hubbing through Riga (e.g. New York-Riga-Vilnius or Dubai-Riga-Brussels).

With the combined population of the three Baltic states being only 6.2 million, the answer is probably no.

It could be argued that Dublin did so, by way of Aer Lingus, but in that case there are generations of Irish expatriates using the point-to-point option. Also Iceland and Luxembourg, but they are, or were, both highly specialised market operators.

That just leaves cargo, and capacity rose sharply in that segment in 2018 and 2019. With the advent of the cargo city and the DHL investment, assuming it prompts others to do the same, that might well be the way to go.