North and South American airline stocks were mainly down on Friday (10-Sep-2010) as oil prices (+3.0%) advanced for the day to USD76.45. The Dow ended trading flat, as the energy sector advanced on the improved oil price, but the utilities sector declined.

Republic Airways (+2.4%) was the strongest performer of the day after Zacks Investment Research rated the carrier’s stock as a "strong buy". The analysts stated the stock is currently cheap, with a forward P/E of just 8.1. The company cited Republic’s expanded business, improved traffic and better-than-expected financial results for 2Q2010. The company stated the results surprised the Zacks Consensus by USD 33.00 cents. Earnings per share were USD 46.00 cents compared with the consensus of just USD 13.00 cents.

Fitch Ratings affirmed the Issuer Default Rating (IDR) for Continental Airlines (-0.9%) at B- and the senior unsecured rating at CC/RR6 prior to the closing of the planned merger between Continental and United Airlines. In addition to the above ratings, Fitch is assigning a rating of BB-/RR1 to Continental's recently issued USD800 million of senior secured notes due 2015. The rating outlook has been revised to "positive" from "stable".

Fitch also upgraded the debt ratings of UAL Corp and its principal operating subsidiary United Airlines (-0.5%). Fitch has also assigned a rating of BB-/RR1 to certain senior secured issues, which are obligations of United and guaranteed by UAL. The rating outlook for UAL and United is "positive".

The day prior, Soleil Securities also maintained a "buy" rating on UAL’s stock, stating the stock remains attractive over a 12-month time horizon. However, the analysts trimmed their 2010 earnings per share forecast from USD4.75 to USD4.55 and 2011 EPS forecast from USD5.20 to USD4.95.

Delta Air Lines (-0.9%) was also down after Zacks stated they remain cautious of the carrier’s stock “due to its debt-loaded balance sheet, unionised labour and rising fuel prices”. However, the analysts believe Delta will be well positioned for an economic recovery, as a result of a “successful integration of the Northwest merger, investments in new products and network, competitive cost structure along with an effort to strengthen the balance sheet”. The current Zacks Consensus Estimate is USD 89 cents per share for 3Q2010, compared with USD 6 cents per share in the previous corresponding period. 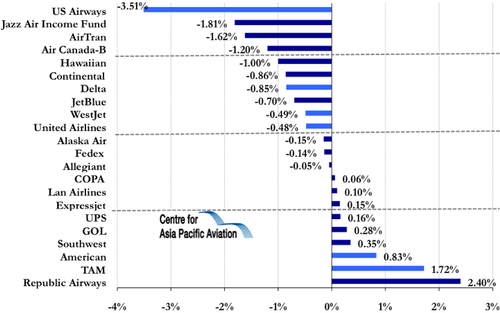