Much in the way that Ellis Island in New York Harbor was the entry point for millions of sea travellers to the US, Idlewild Airport, JFK since the early 1960s, has been the primary US gateway since air travel overtook the ocean liner as the predominant mode of travel.

For decades it was the US gateway airport, partly due to regulatory limitations and the range limitations of aircraft. Only in the 1960s did airlines regularly begin to add Chicago, and with the appearance of 747s, West Coast cities began to get more non-stop service.

And following deregulation and the emergence of numerous hubs, the need to transit New York was diminished. Once open skies agreements were reached, the need for bilateral negotiations for additional services was removed and cities such as Atlanta and Houston began to attract increased long-haul service.

But New York, with its reputation as the world’s financial capital, continues to be the first point of call for airlines beginning service to the US. Still today, almost no airline inaugurates US service bypassing New York – Ethiopian being the one exception that comes to mind.

The rise of not only interior points but also the shift by many carriers to Newark, dented the airport’s numbers for a while. In fact, it was that available capacity that drew JetBlue to the airport in 1999 and made JFK a happy recipient of new hub service.

In 2000, JFK sat in the 20th position for traffic, JetBlue having only begun flying in September 1999 and not yet pumping up the numbers. It ranked below its rival, Newark (15), and even Minneapolis (12), way out in the Midwest.

But the past decade has seen a resurgence of traffic at JFK. Due primarily to JetBlue, the airport has shifted from being overwhelmingly an international gateway to a newly established domestic hub. But its international role continues as new foreign airlines, such as Turkish and Emirates, have commenced US service, starting with New York. 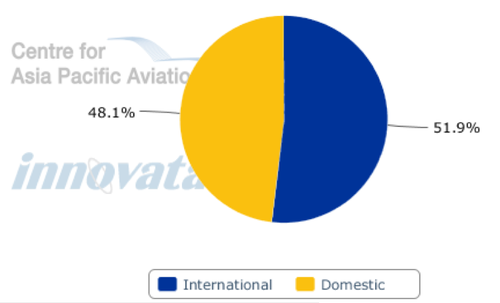 Despite the changes that have occurred at the airport, JFK is but one component part of the three airports that provide New York with its aviation links. Any consideration of the airport needs to be put in the context of that reality. As a result, the service and traffic at JFK is strongly influenced by its nearby neighbors, LaGuardia and Newark.

JFK has long been a focus of transcontinental domestic traffic and for decades the US carriers have operated substantial domestic networks as well. However, with a clear division of alliance “turf” now evident, many of those US flights now are timed specifically to feed international services on oneworld and Skyteam airlines at Kennedy.

New York’s O&D traffic, excepting transcon, is routed through LaGuardia and shows a similar alliance bias. The top three carriers in terms of seat availability at LaGuardia are Delta, US Airways and American, in that order, with United a distant fourth. US Airways has had a long-standing LGA domestic presence but focusses its international services at Philadelphia, 90 miles southwest of New York.

As an example, only five of Delta’s many daily flights between Atlanta and the New York metro area serve JFK. The demise of much legacy domestic service is reflected in the interline agreement that American has reached with JetBlue for JFK feed traffic, leaving AA free to focus its New York-bound traffic at LGA, with the exception of transcontinental flights, unable to use LGA.

United, with no international flights at JFK, also focusses its presence on transcontinental flights, operating its Premium Service (PS) aircraft between JFK and SFO/LAX.

As can be seen by the alliance chart, the largest percentage of seats is “unaligned” and is reflective of JetBlue’s dominance, with oneworld and Skyteam rather evenly matched. If one looks at Newark, however, Star carriers dominate with over 78% of the capacity and oneworld (5%) and SkyTeam (5.9%) are virtually absent. Even the unaligned group at EWR is only 10.5%, making the airport the only real fortress hub in the New York region. 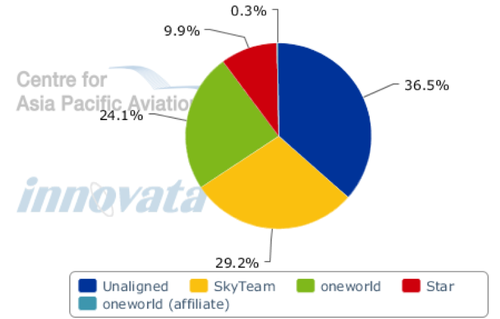 While JetBlue has a slight edge over second place Delta, the strength of DL at JFK and LGA is a reflection of its desire to be “New York’s airline” and has built its presence in pursuit of that goal. Recently it even inaugurated hourly service between LGA and ORD, a market with plenty of existing capacity, but key to being a player in the New York market. 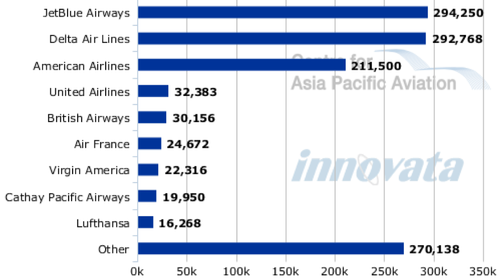 However, Kennedy’s ongoing importance as an international hub is indicated by the fact that five of the top nine seat-providers are non-US carriers, a fairly unique circumstance in the US.

While JFK is no longer the nation’s “most International” airport, a title lost to Miami, it remains the most diversely international, with MIA being a virtual AA fiefdom. And, as we shall see, MIA is far more regionally focussed on Latin America with no direct service to Asia and many fewer flights to Europe. 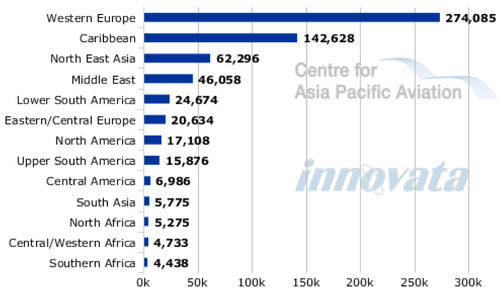 Certainly the JFK links to Europe remain strong, and the Caribbean has been a longstanding market due to the winter appeal of the islands for New Yorkers and the substantial number of area residents with a Caribbean heritage.

But beyond that, the range of destinations with direct service is impressive. The ability to reach an astounding number of foreign cities non-stop remains a hallmark of JFK, with points on every continent available from the airport.

The fares to New York that have been used in previous airport analyses have shown a plethora of prices made possible by the abundance of service. Between New York and London there is a virtual shuttle schedule and even to far-off Tokyo, four airlines (AA, DL, NH, JL) compete with non-stop flights each day, keeping each other’s fares competitive.

The challenge facing JFK, as well as the other New York airports, is the ability to meet anticipated demand. All three are physically constrained in ways that make additional runways, and even expanded ground facilities, difficult if not impossible.

The growing problem is being addressed by a group working to regionally plan the area’s aviation future and has come up with some potential fixes, but the challenges will remain. Even with problems looming, New York and its airports will remain key points in global networks.