Qatar Airways CEO Akbar Al Baker announced earlier this month the carrier intends to join the oneworld alliance by Oct-2013, only 12 months after it announced that it had been selected for membership. The 2012 announcement that the airline planned to join the alliance system sent ripples of reaction through the aviation landscape of the Middle East, as well as globally, helping to bring about a major commercial reshaping.

Joining oneworld will usher in a new era for Qatar Airways. After years of setting its own path and growth trajectory, the airline has decided to hitch itself to the alliance system, albeit to the most loosely based of the international airline groupings. Its membership is being sponsored by British Airways. The airline’s membership in oneworld will see it coordinate flights, schedules and systems with other member airlines, including Iberia, Qantas, Royal Jordanian, Cathay Pacific, Malaysian Airlines, LAN and Japan Airlines.

For Qatar Airways, the upside is that it gains access to a significantly broader global network via its oneworld partners. It will extend its codeshare agreements to include many of its new alliance partners, several of which had previously been vocally opposed to the expansion of the Gulf region’s sixth freedom carriers. Its membership in oneworld will offer the alliance improved east-west routings and connections through the carrier’s geographically fortunate hub in Doha, changing the way much of its traffic flows around the globe.

Since its re-launch in 1997, with a fleet of four aircraft, the carrier has been one of the trend-setters, both for the Middle East and the evolution of the Gulf sixth freedom carriers, and also for global aviation. As Qatar’s national carrier, the airline has expanded its global reach to more than 125 destinations on all continents. Its fleet has expanded commensurately, reaching more than 120 aircraft in early 2013. 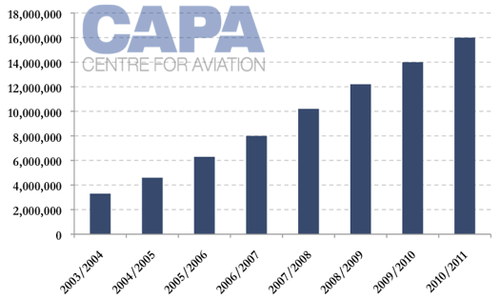 In less than a decade, the airline has expanded its passenger traffic more than fourfold. In terms of overall traffic (measured in ASKs) Qatar Airways is currently the Middle East’s third largest carrier – behind the much larger Emirates and the much older Saudia.

While it doesn’t hope to eclipse Emirates – which is double the Qatari carrier’s size and expanding just as quickly – Qatar Airways is close to taking over from Saudia as the region’s second largest carrier. In terms of international traffic, Qatar Airways is already far larger than the Saudi Arabian national airline, given the substantial domestic market in the Kingdom.

Qatar Airways also threatens to eat into Saudia’s markets directly, as, under the new liberal access regime, it has been given a licence by Saudi aviation authorities to operate domestically, with flights expected to commence late in the year. 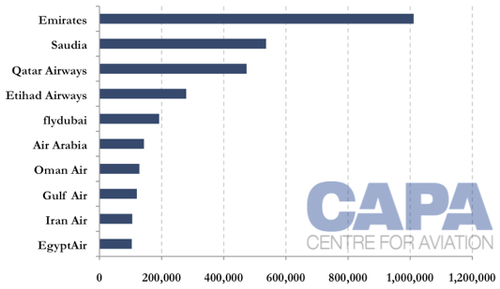 Cargo is also providing a major avenue for growth for the airline. The carrier’s cargo business has been expanding at around 20% p.a. and now accounts for 28% of revenue. In recent years, it has added dedicated Boeing 777Fs, to complement its smaller A330 freighters and add new destinations and significant volume to its operations.

The airline has also announced it plans to acquire seven cargo aircraft in 2013, a move which would expand its overall cargo capacity by 40%. Qatar Airways has already taken three A330-200Fs on lease, allowing it to phase out its older A300Fs.

While the headline traffic growth has been impressive, Qatar Airways' ambition is not to be the largest carrier in the Middle East. Instead, the carrier’s CEO, Akbar Al Baker, has set it the objective of being the benchmark airline, by which the standards and levels of service of others are measured. Mr Al Baker has even attributed some of his reluctance to join the alliance system over a fear of losing Qatar Airways' ability to set its own service and product standards, as well as conducting its expansion and operations on its own terms.

The airline’s focus on quality has paid dividends. In 2009, it was the first carrier in the Middle East to be awarded SkyTrax’s five star rating. It has also received the airline rating company’s award for airline of the year in 2011 and 2012. The focus on a premium product has even seen it add a private aviation arm, as well as a dedicated terminal for Business and First class passengers at Doha International Airport. It also has a dedicated premium lounge at London Heathrow.

Around 10% of the Qatar Airways seat capacity is offered in premium cabins (Business and First). This figure is well above the global average of 7.3%, spread across First, Business and Premium Economy classes. However, in terms of the proportion of premium seats per aircraft, the carrier lags behind the level offered by its Gulf rivals Emirates (15.8%) and Etihad Airways (11%). 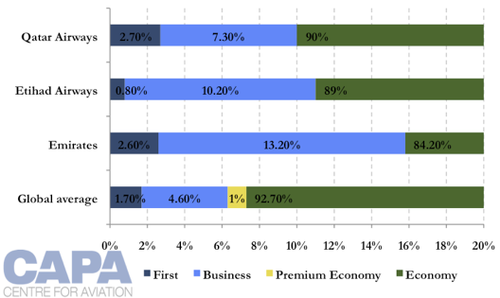 The airline’s growth has seen its home at Doha International transformed into a major international hub in a period of less than two decades. As a national carrier – 50% owned by the State of Qatar and 50% controlled by private shareholders – one of the airline’s stated aims is to support the development of the Gulf State and promote its capital as one of the major hubs joining east and west.

In 2012, Doha International Airport handled 21.2 million passengers, making it the second largest hub in the Middle East, after Dubai. With Qatar Airways' emphasis on international connectivity, the airport is now one of the world’s 25 largest airports, as measured by international passenger traffic. In terms of overall passenger numbers, it is around 60th. 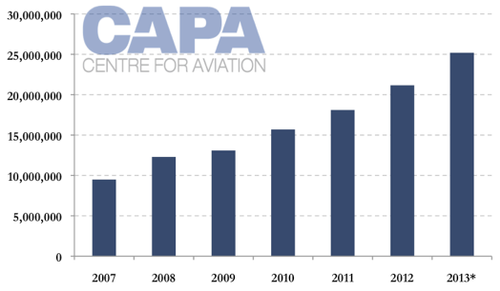 For 2013, the airport expects to handle around 25.2 million passengers, growth of around 19%. Around three quarters of the passengers at Doha International Airport (DIA) will be handled by Qatar Airways this year. The next largest carrier at DIA, Emirates, has just 1.1% of seating capacity. 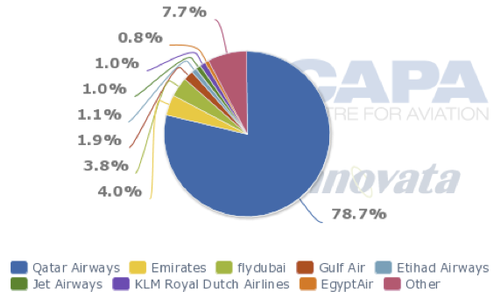 Diversifying the Qatar network, with a new route every month for the next five years

Over the next five years, Qatar Airways plans to add between 12 and 15 new destinations per year. The carrier’s network is highly diversified, a combination of short and medium-haul regional routes operated with a mix of A320s and smaller widebodies and an increasing amount of long-haul and ultra-long-haul routes, primarily operated with Boeing 777s.

Its largest geographic region, with just under a quarter of capacity (as measured by ASKs) is Europe, followed by Southeast Asia with a little under a fifth of ASKs. India and the South Asian region is important too, with 15% of capacity. 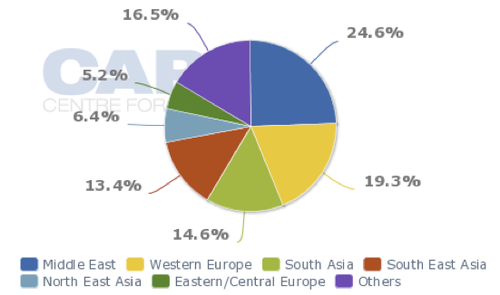 North America is also proving to be an increasingly attractive target for Qatar Airways, as it has for the other sixth freedom Gulf carriers. Earlier in the year it added a service to Chicago, taking its number of passenger destinations in the country to four, after Houston, New York and Washington DC. Mr Al Baker has also announced that the airline would like to add Boston and Detroit within a year.

2013 will also see one of the world’s most ambitious aviation projects come to fruition, the new Hamad International Airport. Once the airport opens for operations, it will massively increase the airport capacity in Qatar. With Doha International Airport at its design limits, the new facility will provide sufficient room for the next phase of growth for Qatar Airways and meet the country’s aviation ambitions for more than 50 years.

Built on land reclaimed from the Persian Gulf, the airport will boast capacity for 24-29 million passengers p.a. and 1.4 million tonnes of cargo p.a. once it is in full operation. Construction delays and a decision to roll the first two phases of the airport into one has seen the opening delayed multiple times, first from 2009 to 2011, then to 2012 and finally to mid-2013. Qatar Airways plans to move to its new home by the end of the year, gradually shifting its operations over the second half of 2013.

Expansion has been dogged by aircraft delays

Qatar Airways plans to add better than one aircraft per month to its fleet, provided aircraft manufacturers are able to meet their delivery schedules. It has more than 200 aircraft on order or option, most of them the latest generation of aircraft offered by their manufacturers.

Over the next five years, the airline is due to take delivery of more than 80 aircraft, predominantly widebodies.

Source: CAPA Fleet Database
Note: *only aircraft being acquired directly from manufacturers are included. 2013 figure is for the remainder of 2013 as of 1-May-2013.

Not everything has gone the carrier’s way when it comes to its fleet expansion however. In order to meet its growth ambitions, the carrier has been a serial purchaser of next-generation aircraft types.

Several lengthy and high profile delays from Airbus and Boeing in delivering their new types, as well as issues with new aircraft when they enter service, notably the 787 and the A380, have seen the airline’s fleet growth struggling to meet its ambitions.

As a result, it has not grown as rapidly as Mr Al Baker would have preferred, a point on which he has publicly been unambiguous. The carrier was the first in the Middle East to take delivery of Boeing 787s, but even then the aircraft was more than two years later than the carrier had originally expected. The recent high-profile grounding of the aircraft has only increased his level of frustration. The carrier’s Chicago route launch was reduced from daily to three times weekly because the 787s were not available.

Mr Al Baker has refused to take delivery of any of the 10 A380s that the carrier has on order from Airbus until the manufacturer incorporates a permanent fix for the wing bracket cracking issue.

The carrier's first A380 is due to arrive in late 2014. Qatar is also the launch customer for the A350 XWB. Airbus has already pushed back first delivery of the aircraft by six months and has described its new mid-2014 in-service target as “challenging”. If Airbus is unable to meet its promised targets, Qatar Airways will be left waiting once again, without the aircraft it needs to fulfil its plans.

Profitability is a challenge, with such high growth rates, so IPO is on hold

On the commercial side, profitability remains sporadic for Qatar Airways. In FY2009/2010 and FY2010/2011 the carrier was solidly profitable, even with its tremendous rate of expansion. In FY2011/2012, the carrier reported a small net loss – without revealing actual numbers – due to climbing fuel prices. The carrier’s on-again, off-again IPO is on hold again until somewhere in the 2017 to 2020 timeframe.

Gaining access to a significantly broader global network via its oneworld partners may deliver easier financial rewards, despite the accompanying risk of diluting Qatar's high service standards. It will extend its codeshare agreements to include many of its new alliance partners, several of which had previously been vocally opposed to the expansion of the Gulf region’s sixth freedom carriers. In return, its oneworld membership will offer the alliance improved east-west routings and connections through the carrier’s geographically fortunate hub in Doha, changing the way much of its traffic flows around the globe.

For state-owners Qatar, there is no intention of selling off a prized national asset and a major economic enabler, as well as an integral part of the nation’s growth strategy. With 50% state ownership, its overwhelming priority is not the bottom line, at least at the moment. However, having a national carrier that is not only rapidly growing but profitable as well is an achievable goal, as demonstrated by Emirates and, more recently, Etihad Airways.