Qantas Group’s traffic results for Jan-2010 revealed signs that yields are starting to improve after a very difficult 2009. Over the past two months, Qantas international yields have showed continued improvement, with monthly yields moving from a 10.3% year-on-year reduction in Dec-2009, to a 7.7% reduction in Jan-2010. This represents a notable improvement from CAPA-estimated yield reductions of 19.2% in Nov-2009 and 27.2% in Oct-2009. The improved yield figures were released just three weeks after the carrier reported a cautious outlook for 2010.

And in a boost for transparency, or to improve a flagging share price, Qantas has provided monthly international yield results for Dec-2009 and Jan-2010, with yield figures previously reported a financial year-to-date basis.

The carrier added that total Group yield (excluding forex) in the financial year to Jan-2010 was 11% lower than the same period in 2008, commenting that due to the “unprecedented” yield movement in FY2008/2009, comparison with FY2009 become less meaningful.

Domestically, yield excluding foreign exchange for the financial year to Jan-2010 (including Qantas, QantasLink and Jetstar Domestic operations) was down 6.1% year-on-year. A monthly breakdown for Jan-2010 was not disclosed, but CAPA estimates domestic yield is back into positive territory.

Qantas Group domestic yields have shown continued signs of improvement in the latter part of 2009 and into 2010, as reflected in the Australian Bureau of Transportation and Regional Economics’ “Domestic Air Fare Index”, which revealed that Business class services (have seen improved fare levels in the past few months, at 104.0 (Jul-03 =100) in both Feb-2010 and Mar-2010. 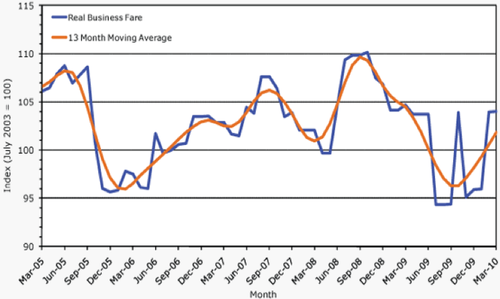 The 13-month moving average also shows continued improvement from a low in Sep-2009, while the indexed Mar-2010 result represents the third highest ‘Real Business Class’ result in the past 18 years.

Australian Domestic Air Fare Indexes for the month of March: Mar-1993 to Mar-2010

Also in the month, Qantas Group reported a 5.7% increase in total passenger numbers (to 3.4 million, of which Jetstar-branded operations contributed 38% of passenger numbers), with a load factor reduction of 0.6 ppts to 81.2%, driven by domestic load factor reductions across the board (Qantas Domestic down 2.6 ppts to 78.4%; Qantaslink down 2.3 ppts to 62.2%; Jetstar Domestic down 3.0 ppts to 84.5%).

Meanwhile, Singapore-based Tiger Airways Holdings announced a 90% increase in passenger volumes in 2010 across its Singapore and Australian operations, to 437,000 passengers, in Feb-2010 (a split for each region was not disclosed). Average network-wide load factor also increased, by 6 ppts to a very solid 85%.

Passenger numbers benefited from the addition of double daily Hong Kong-Singapore service and strong demand during the Lunar New Year period. This network growth is expected to continue, with the addition of Australian services from Brisbane to Melbourne, Adelaide and Rockhampton this month.

Tiger Airways, late last month, stated it would continue its price-leadership position in the Australian market, with the carrier to continue to offer reduced airfares in 2010. Comparatively, Qantas and Virgin Blue warned that it was inevitable that air fares would rise in 2010, after reaching historic lows in 2009, with Qantas commenting that heavily discounted air fares were ''simply not sustainable''.

This prompted Tiger Airways to comment that “as other airlines seek to increase their air fares this year as the effects of the global recession abate, Tiger Airways will remain focused on looking at ways to further reduce its air fares”.

Tiger Airways has, on numerous occasions, commented that it has contributed to a reduction in airfare levels in the Australian domestic market.

BITRE reported discount fares continue to remain at record lows, according to its “Best Discount Price” Index (Jul-03 =100), in Mar-2010, with the best discount fare index at 62.3 in Mar-2010, significantly lower than the 90.4 figure reported in Mar-2009. The 13-month moving average also continues to show a downward pricing trend, reflecting the challenging combination of an imbalance between capacity and demand, coupled with increased price-sensitivity of passengers, which has led to discounting in most Australian leisure segment. 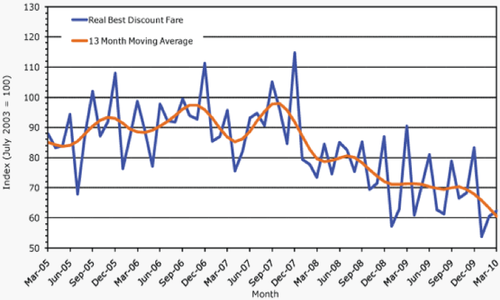