Qantas profits quadruple despite A380 impact

Qantas Group posted a four-fold increase in half-year net profits to AUD241 million (USD240.6 million). Underlying profit before tax rose 56% to AUD417 million as revenues increased 10% to AUD7.59 billion, despite the Nov-2010 mid-air engine explosion which grounded the carrier’s A380 fleet for two months and presented “significant operational challenges” for the carrier. Qantas CEO Alan Joyce added he expects underlying profit will be “materially higher” in the full year.

Also in the period, operating expenses increased 8% while unit cost increased 1.7%. However, unit costs declined 1% when the impact of A380 disruptions and reduced sector length is excluded. 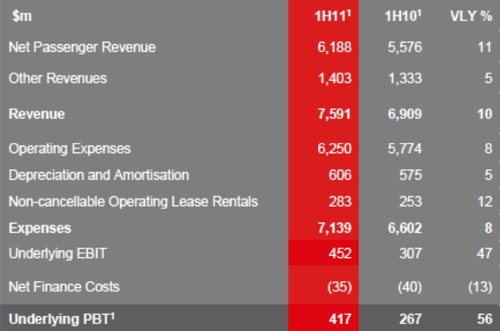 Mr Joyce stated the result builds on the company's 2010 full-year performance and showed it had emerged from the global financial crisis in a "solid position". "The Qantas Group has delivered a strong result and is, again, one of the few airlines to remain consistently profitable and continue to hold an investment grade credit rating," he said.

Qantas flights contributed AUD165 million in pre-tax profits over the period, a 175% year-on-year increase, while Jetstar contributed AUD143 million, marking a record interim profit. "Qantas and Jetstar are now the two most profitable domestic airlines in Australia, demonstrating the strength of our two-brand strategy and capacity to service and grow both the business and leisure sectors," stated Mr Joyce.

All other parts of the group, including Qantas Frequent Flyer, were profitable in the period, with the FF business, like Jetstar, reporting a “record” interim profit as members increased by a robust 12% to 7.5 million. Qantas Freight, meanwhile, reported EBIT growth of 141% to AUD41 million. The carrier also stated that Jetstar Pacific is now profitable in “key months”.

However, the company stated it would not pay an interim dividend.

Mr Joyce stated the general operating environment continued to improve with business travel continuing the rebound. "Forward bookings indicate yields in the second half of FY11 (financial 2011) will be higher than the same period in FY10, noting that the first half is typically a stronger revenue period due to seasonal factors," he said.

In 1H2011, Qantas Group reported a strong 9% yield improvement. Qantas reported a 7% increase in yields, including a 12% international yield improvement, with domestic yields up 1% to “return to pre-crisis levels”, as the domestic business travel market continues to recover. Interestingly, the carrier noted that the “Qantas yield premium to key competitor [ie Virgin Blue] was restored to 2008 levels” – although there had been no previous suggestions that the margin had been reduced.

However, Jetstar domestic yields are still lower than in 1H2011. 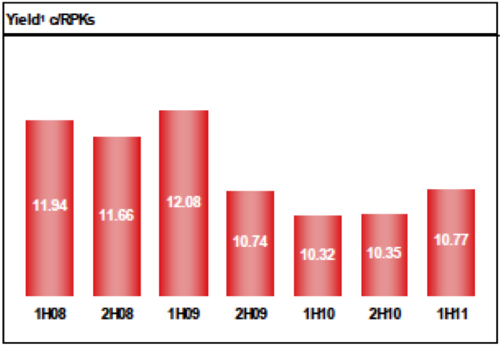 Under the weather: feeling the affects of fuel, floods and engine fires

From 14-Feb-2011, the underlying fuel costs for 2HFY2011 are estimated to increase to around AUD2 billion due to higher forward market jet fuel prices and increased flying. Fuel surcharges, fare increases and hedging are being used to mitigate the impact of fuel price rises.

Qantas Group estimates the A380 disruptions will account for AUD25 million in 2H2011 in addition to the AUD55 million in 1H. Qantas remains in discussions with Roll-Royce in relation to compensation for the economic loss incurred. No agreement had been reached at this stage. Any compensation will be recognised in the group’s Underlying PBT in the relevant period.

Mr Joyce stated the LCC subsidiary is well positioned to capitalise on the improving global aviation environment and opportunities in the premium and leisure sectors. He noted that Jetstar remains "well placed" as the low fare leader in the market, as domestic leisure market conditions continue to be highly competitive. 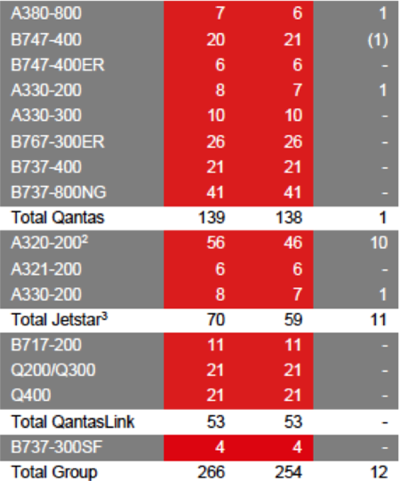 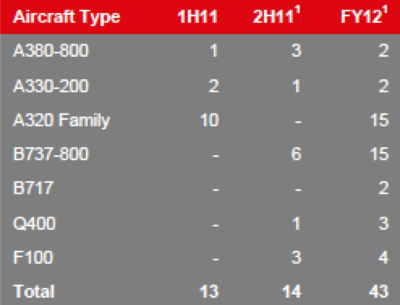 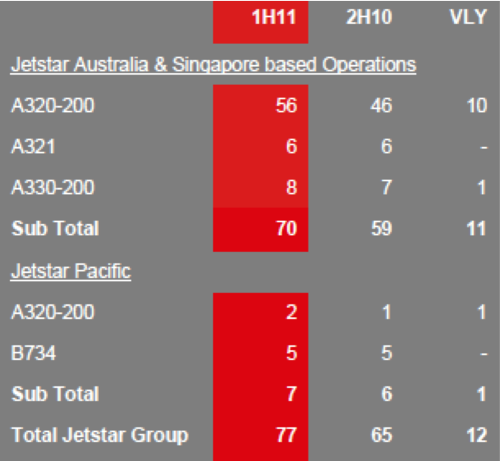 ** The Qantas Frequent Flyer results include the impact of the change in accounting estimate, which has contributed AUD82m to the 1H11 result and AUD78m to the 1H10 result.