Qantas’ international business is facing considerable strife, as an unprecedented drop off in international yields continued in Apr-2009, despite the Easter holidays falling in the month. International yield, excluding foreign exchange, plunged 13% last month, according to The Centre’s estimates, after an 11% fall in Mar-2009. The weakness of the US dollar over the past few weeks could help cushion Qantas’ international yields in May-2009 (as it is predominantly an outbound carrier), but revenues on the US route would be hit, adding to already remarkable pricing competition in that market as Delta prepares to enter.

The swine flu outbreak is also decimating traffic from Japan - causing Jetstar to cut service in what was previously a resilient outbound market from Japan. The rapid spread of the outbreak in Australia in the past few days could have a flow on impact to bookings both domestically and internationally.

Qantas’ domestic yield fell 6.1% last month, an improvement from the 10% falls in Feb-2009 and Mar-2009, but still reflective of considerable pricing pressure, and despite a 2.1% reduction in domestic mainline capacity (ASKs). 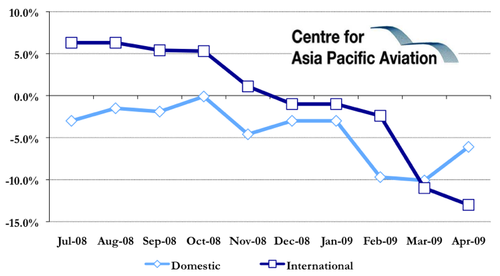 Yields down despite capacity cuts. Jetstar picks up some slack

The reduction in yield is especially concerning given the moves by Qantas to rein in capacity. Group capacity (ASKs) fell 4.5% last month, including a 10.7% reduction in international mainline flying. Jetstar continues to grow, adding 3.6% more capacity in the domestic market and 21.5% more ASKs internationally.

Further mainline international capacity cuts and transfer of routes to Jetstar appear inevitable if yields remain at these levels for much longer.