Like almost every airline around the globe, Qantas has been blindsided by the freight train that is the Covid-19 outbreak.

The abruptness of the airline’s change in outlook has been dramatic. A few months ago Qantas was comfortably on track and focusing on new aircraft orders; on 20-Feb-2020 its share price rose almost AUD1.00 to AUD6.67 following its 1H results announcement and its forward looking plans to combat the threat; by 19-Mar-2020 that price had slumped to AUD2.14.

Now the airline is announcing previously implausible measures as it cuts back its network, fleet and workforce.

The carrier has acted swiftly and has not been afraid to make drastic moves – a hallmark of the current management in everything from crisis management to labour relations.

International operations will be suspended completely, with domestic capacity cut by 60%. About 150 aircraft will be grounded, and two thirds of the carrier’s 30,000 employees will be stood down.

Tough measures, but in the circumstances – entirely judicious.

Projected cuts have escalated rapidly over the past four weeks

The international suspension will apply from the end of Mar-2020 to the end of May-2020, and the airline will make decisions about the network for Jun/Jul-2020 in early Apr-2020. The carrier’s options will be to roll over the same cuts; increase them; or reduce them.

The forecast has deteriorated with remarkable speed.

Many of the capacity updates were prompted by the Australian government’s moves to restrict travel. All international travellers were required to self-quarantine for a period of 14 days from 15-Mar-2020, then the border was closed to foreign nationals from 20-Mar-2020.

Many employees will face stand-down with no pay

Qantas has said that the scale of network cuts means that two thirds of its 30,000 employees will not be required until at least the end of May-2020.

The carrier is implementing a range of options for these workers during the stand-down period. They will be able to draw down annual and long-service leave, as well as using up to four weeks leave in advance, or participating in a half-pay leave programme.

Despite these moves, the carrier has warned that periods of leave without pay will be “inevitable” for some employees. Qantas is working with large companies, such as the supermarket chain Woolworths, regarding temporary job placements.

The upper ranks will be hit in their wallets too. Senior executive management and board members will forgo all pay through the end of the fiscal year on 30-Jun-2020, increasing the previously announced pay cut of 30%. Annual management bonuses have been cancelled.

Widebody aircraft grounded, some will be used for cargo

There are also significant fleet ramifications from the network moves.

Qantas has said that it will park 150 aircraft – including all of the group’s Airbus A380s, Boeing 747s and 787s. These will be spread around what are now largely unused airports across Australia, with many stored at Avalon Airport near Melbourne. Qantas will also use some of its passenger aircraft for cargo-only flights, as freight demand has increased due to the drop-off in global belly capacity.

Qantas insists that it intends to return all of the parked aircraft to operations when the current crisis is over. It does not plan to sell or retire any due to the grounding, CEO Alan Joyce has said.

However, the airline is in discussions to raise money against the value of some of its newer aircraft, such as 787s.

The carrier had planned to confirm a tentative order for up to 12 Airbus A350-1000s for its Project Sunrise initiative by the end of Mar-2020. However, Airbus has now given Qantas until the end of 2020 to make a final decision on the order. Mr Joyce has been very bullish on this project, and he believes it will be one of the keys to profitable future growth.

The value of the nonstop ultra long haul operation was briefly illustrated as its via-Singapore London services were rerouted to add another daily service to the nonstop via Perth, reflecting traveller concerns about transiting foreign airports.

So, assuming demand and traffic do bounce back sometime this year, Project Sunrise will likely be dusted off and set in motion again.

Qantas had also intended to place an order this year for the eventual replacement of its narrowbody and regional jet fleets; while the carrier has not revised this timetable, it is apparent that it will have enough distractions to make an order this year unlikely.

The chart below shows how the group’s international capacity has dropped in recent weeks, affected by the progressive suspension of routes to Asia and elsewhere.

The fall-off will presumably reach close to zero towards the end of March. 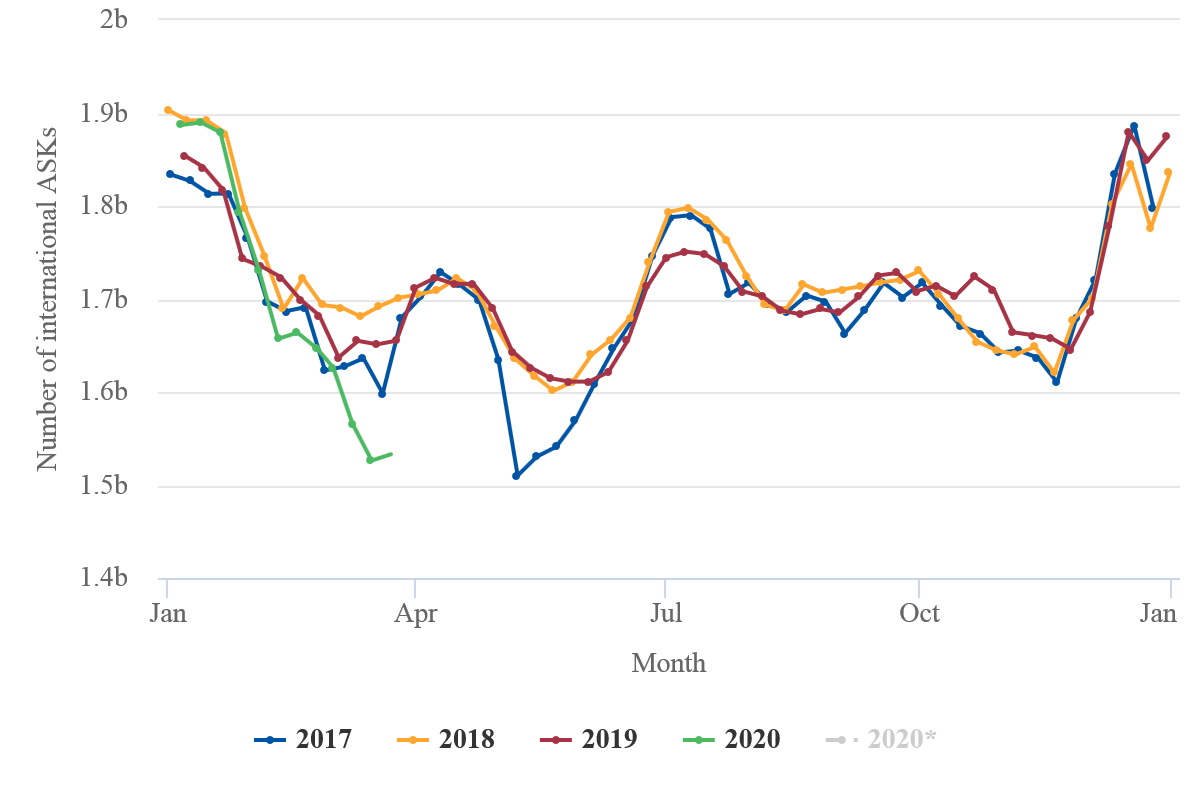 Although scheduled international flights will be suspended, Qantas has said that it will probably operate some “ad hoc” flights. These will be used to maintain “some strategic links”, largely for repatriating stranded Australians, to be determined after discussions with the government.

Mr Joyce has previously stated that he believes there will be a surge of pent-up demand when the COVID-19 threat eases. Qantas has already established a team that will oversee the airline’s service ramp-up when the time is right.

Domestic flights will still operate, but with significant reductions

On the domestic side, Qantas intends to “maintain connectivity” to almost all of the current domestic and regional destinations served by Qantas, QantasLink and Jetstar. However, there will be frequency reductions and route suspensions.

Demand has fallen away – due to government restrictions on a range of activities, corporate travel bans, and a public reluctance to travel.

The slate of domestic (and New Zealand domestic) flight suspensions and reductions can be seen here.

As would be expected with a 60% group-wide domestic cut, there will be substantial reductions across both regional and trunk routes.

One of many notable aspects is the decrease on the key Sydney-Melbourne route, which has consistently been one of the world’s busiest domestic traffic flows. According to the airline’s 19-Mar-2020 schedule notice, Qantas will reduce flights between Sydney and Melbourne from 250 return services per week to 8 – a reduction of 65%.

Data from CAPA and OAG show that capacity on the Sydney-Melbourne route, as measured in one-way seats, had already been reduced year-on-year as of 16-Mar-2020.

However, the market share has remained relatively stable. Qantas Group carriers have the largest share of seats, with a combined 61.5%.

Jetstar’s New Zealand domestic network will be significantly scaled back.

The LCC is suspending four domestic NZ routes, including its only flights to Queenstown and Dunedin. The two remaining will be the trunk routes from Auckland to Wellington and Christchurch, and they will be scaled back from 42 to 14 frequencies per week each.

Overseas-based affiliates of the Qantas group are also cutting services. Jetstar Asia is suspending all operations from 23-Mar-2020 to at least 15-Apr-2020, while Jetstar Japan and Jetstar Pacific have suspended international flights and cut back domestic flying.

Federal support package will provide some relief from fees and charges

Despite all its actions, Qantas obviously faces a large financial headache in coming months.

It will he helped somewhat by a modest government relief package for the local airline industry, which is valued at AUD715 million. The package comprises waivers and refunds for fuel excise tax, domestic air traffic control fees, and domestic and regional aviation security charges. It includes an upfront payment of AUD159 million to airlines covering the reimbursement of charges paid since 01-Feb-2020.

While further government support for airlines is likely, Mr Joyce has signaled that measures to help Australian workers laid off or stood down would be a better government spending priority for now.

Mr Joyce noted that the company’s cash position and balance sheet are healthy, thanks to strong financial results in recent years. This will allow Qantas to weather the latest crisis better than most: “A lot [of airlines] will go under, but Qantas will not be one of them”, said Mr Joyce. The airline’s impressive financial record also makes it easier to seek more financing.

Qantas has taken decisive steps regarding its capacity reductions, although an increasing number of Asia-Pacific airlines are also suspending all (or almost all) of their international networks.

A key advantage that Qantas has over Asian giants such as Singapore Airlines or Cathay Pacific is that it has a broad domestic network to provide revenue while borders are closed. Its financial strength also sets it apart from many airlines in the region.

This will be cold comfort to the employees who will have to endure leave without pay, although one consolation is that Qantas is a better prospect than most of its peers for building back to its full schedule and workforce.

Now, like the rest of the industry, Qantas can only watch as the COVID-19 outbreak runs its course.