Qantas has begun talks with Rolls-Royce to recoup financial losses from the grounding of its Airbus SAS A380 fleet after an engine malfunction last month. The carrier added that it will take legal action if a settlement can not be reached. Qantas shares climbed 1.2% to AUD2.64 yesterday.

Also yesterday, the Australian Transport Safety Bureau (ATSB) issued a safety recommendation about potential engine problems in some A380 aircraft and a direction to Qantas to conduct a further inspection of the Trent 900 engines on its A380 aircraft, to inspect the oil filler tube that feeds oil to the engine's high pressure/intermediate pressure bearing structure.

Skywest shares gained 8.3% yesterday, following gains of 1.4% over the past two days after a 10.3% slump on 29-Nov-2010. Skywest stated it expects lower net profits for 1H2010/11 due to one-off costs incurred by adding new A320-200 aircraft to its fleet and AOC but added that it expects basic operating performance for the six months ending 31-Dec-2010 "to be slightly ahead" of performance in the previous corresponding period.

Thai Airways has cancelled plans to acquire an additional 10% stake in Nok Air from Krung Thai Bank (KTB) stating the bank’s asking price for the shares was too high. Nok expects to report a net profit of THB700 million this year, on THB3 billion in revenue. It expects a lower net profit of THB200 million in 2011, on THB 4 million in revenue, due to higher fuel costs. Thai Airways shares declined 3.7% yesterday.

Skymark Airlines stated it plans to hire 470 former Japan Airlines employees including 120 former JAL captains and first officers in addition to around 50 mechanics and 300 cabin crew. The carrier’s shares gained 4.0% yesterday, following a 5.0% increase on the previous days. 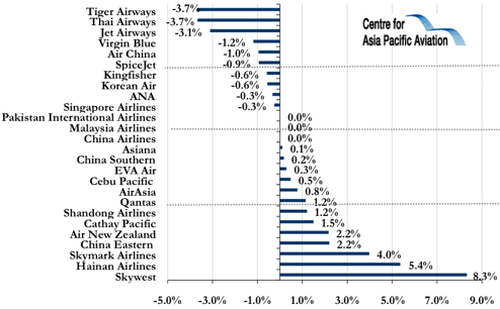