Qantas, Airbus and Rolls-Royce seek to limit the damage as Rolls’ shares plunge 10%

Rolls-Royce’s shares have fallen almost 9.6% since Thursday morning, 04-Nov-2010, following the explosion of a Trent 900 engine powering a Qantas A380 on a flight from Singapore to Sydney and the overheating of an RB211-524 engine powering a Qantas B747-400, also departing Singapore (ironically with the crew of the A380 aboard, hoping to return to Australia). Qantas shares meanwhile have remained relatively stable and Airbus parent EADS shares rose 0.8% on Friday. 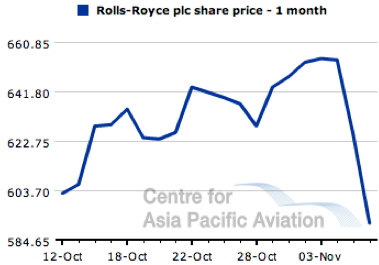 The Rolls downturn follows last month’s fault with another RB211-524-powered Qantas B747-400 en route from San Francisco to Sydney and the explosion of a Trent 1000 engine on a test bed at its Derby headquarters (although that apparently involved extreme testing). Three of the four incidents were uncontained failures, which are usually very rare occurrences.

The battle to soften the media damage

Predictably, words like disaster and crisis have abounded, along with frightening pictures of a fragmented engine. Media treatment has been intriguing, although none was worse than the first Twitter reports of a “Qantas crash” (in fact only a couple of intact pieces of engine cowling landed in an Indonesian school ground), These were rapidly followed by a scramble to divert attention from both Qantas and Airbus. Qantas was quick to dispel the crash rumour, issuing a statement saying, “Some media reports suggested the aircraft had crashed. These reports are incorrect. No Qantas aircraft has crashed. There were no injuries to any customers or crew.”

In Qantas’ case, one feature was the sadly now-typical and highly damaging media refrain from its engineering union seeking vaguely to link each incident to Qantas’ offshore maintenance. The potentially serious A380 incident and the more routine B747 engine shutdown apparently were quite unrelated to this issue, but it was one more fire that had to be fought.

A rush to judgment?

With that weight around its ankles, Qantas had to reassure the public of the intrinsic safety both of its operations generally as well as of its highly prized A380s. The airline also has its passengers and investors to worry about, so has been perhaps prematurely keen both to stress that the fault was with Rolls Royce and neither with its own procedures nor with the highly valuable A380 itself.

One positive: Qantas CEO Alan Joyce has been effectively conspicuous and open with the media, which is always a preferred approach – in contrast for example to the airline’s performance after a potentially disastrous runway overrun in Bangkok in 1999, where lack of candour badly damaged Qantas’ credibility.

It certainly does appear that the fault on this occasion lies with the Rolls engine, but the stakes are so high all round that there has perhaps been an undue rush to judgment.

Airbus too was keen to ensure that the Qantas incident did not reflect on the A380 itself and quickly confirmed the Qantas A380 was involved in an in-flight engine failure on 04-Nov-2010. The Rolls-Royce Trent 900-powered aircraft was delivered to Qantas on 19-Sep-2008 and had logged around 8,165 flight hours and 831 flight cycles.

Airlines and manufacturers in the past have tended to be more circumspect while air safety authorities are still on the case. But here the fingers all pointed very quickly to Rolls-Royce alone.

Qantas issued a statement on Friday noting it “continues to work with Rolls-Royce and Airbus to fully understand the circumstances surrounding the engine failure ahead of taking the first steps toward to resuming operations.” The airline did however reflect the niceties of a full investigation, noting that it planned to “work closely with the (Australian Transport Safety) Bureau to ensure the industry benefits from a detailed understanding of what caused the incident.”

Rolls-Royce on the defensive

In a statement, Rolls-Royce noted it had been “working closely with Airbus, our customers and the authorities”, adding: “The Group feels that it is prudent to recommend that a number of precautionary engine checks are performed to ensure continuous safe operation of the fleet. This process is now underway and coordinated with Airbus…..This is at a very early stage and it would be inappropriate to draw any conclusions at this time.”

Qantas needs a return to normality before the Christmas bookings accelerate

Qantas now has to hope that the disruption to its operations can be managed quickly, that the A380s are cleared to fly well before the Christmas period and that any safety backlash does not stick. Meanwhile, Qantas’ competitors will be quietly picking up a lot of forward bookings, as uncertainty (and perhaps a little safety concern, justified or not) causes passengers to book away from the unknown. The A380 incident – which could well have had drastic consequences – and the much less dramatic B747 engine shutdown, appear to have been handled very professionally by the flight crew.

In normal circumstances, this would have worked to Qantas’ benefit, in fact reassuring the public that they were in the best of hands in any emergency. But the combination of the engineers’ union white-anting campaign and the inevitable post-incident inflated highlighting of every operational issue has not allowed the usual pushback that might usually have followed. Mr Joyce is now actively promoting the carrier’s “commitment to the highest safety standards”, so that all “scheduled A380 operations (are suspended) until sufficient information (is) obtained about what occurred on the QF32 aircraft.” Again, with good management, this can in the longer run reflect well on Qantas.

This is not how the 90-year old airline wanted to celebrate its birthday - and even the support of honorary Captain and Qantas fan John Travolta has been able to divert attention back to the birthday cake. In nine decades, Qantas has seen off a few difficult times. This time, fortunately, the damage has not been to human life or limb. But the financial spinoff will be most unwelcome right now, even if the finger can be pointed firmly at Rolls-Royce.

And Rolls-Royce has a massive 5,100 engines on backlog

Similarly, outgoing Rolls-Royce CEO John Rose would not have hoped for such a challenging exit, as, after 14 years at the helm, he phases out in preparation to stand down in Mar-2011. It is quite possible that the engine problem can be quickly remedied, but as the share price slump confirms, the markets are already concerned.

Rolls – and its suppliers – have a record order book to fulfill. The company’s civil order book rose to GBP47.3 billion as at 30-Jun-2010, up 0.6% year-on-year, as Rolls-Royce booked GBP3.3 billion in orders during the first-half. A further GBP1billion of orders were announced during the recent Farnborough Airshow. The OEM’s order book includes more than 5,100 engines. This is equivalent to more than 35% of today’s installed fleet, which was delivered over more than 25 years. 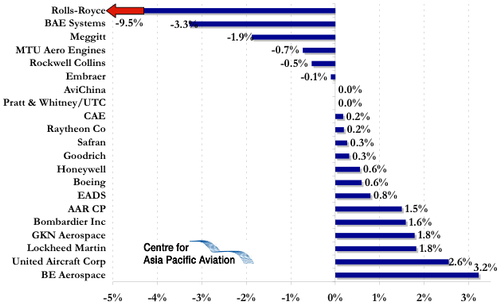 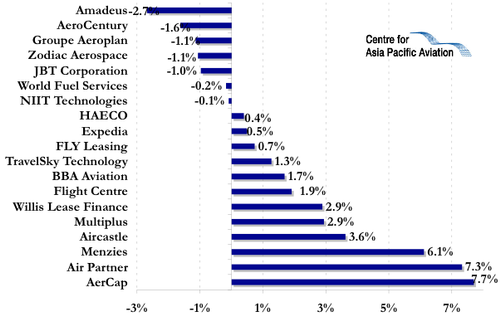