Premiums slump 10% for airline insurers, but still profitable in safest ever year

The impact on total insurer revenues in the market has been to remove USD100 million in premiums from the global markets, “and the downward path looks set to continue”.

Yet the insurers are still smiling amid this good news for (most) airlines.

First, airlines are still expanding their fleets, especially in Asia and secondly, aircraft losses have dropped steeply. So there are more aircraft to insure and less payouts on loss claims. The consequence is that many insurers are in the black, despite the slowdown.

With a neo-poetry not typically associated with insurers, Willis observes that “the airline insurance market is a catastrophe market with an absence of catastrophes and a new normal is developing”.

In the absence of recent catastrophes, premiums have trailed claims downwards, albeit falling more slowly after the peaks of 2009, where there was a shortfall in premium income.

Back in 2009, Willis noted that “with losses in 2009 being at their highest in history (excluding 11 September 2009 losses) and lack of investment income available to insurers, it was expected that the level of premium increase would see a rise on the 17% increase seen during the first nine months of the year.” The cause of the losses was not so much major accidents, but a series of other, often non-life threatening incidents such as hailstorm damage and undercarriage failures.

But 2012 was exceptional, according to Willis: “The industry loss experience continues to be excellent with 2012 remaining on track to the best ever year in terms of airline losses. There have been USD226 million of hull losses, USD43 million of liability losses and USD412 million of attritional losses. This generates an overall total of just USD681 million after 11 months of the year. There have been just six major losses in excess USD10m and in only one of these were there any fatalities.” 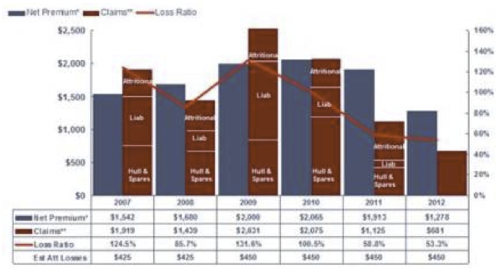 US airlines however may have to pay higher rates than elsewhere

The US airline market, in contraction, has become a standalone in global aviation as the major airlines actually contract in size. December was to be a big month as it is the time when United, Delta, US Airways and Southwest Airlines must all renew.

From the insurers’ point of view at least, two important features arise from the recent series of consolidations among the biggest US airlines:

The result is a “difference in risk profile and experience (which) is in contrast with other areas of the world that are experiencing rapid growth”. Nonetheless, because their fleets are not expanding, US airlines may not qualify for the sort of steep volume discounts that are occurring elsewhere – because that would “involve real premium erosion”.

December big for renewals in Asia too, where there is however growth

Most substantial of this market expansion for the insurers is the CAAC programme, which has become “by some margin the largest programme in the market”. So big in fact that “the growth on this programme alone generates exposures that would place it among the largest 20 programmes in the market.”

The CAAC’s aircraft fleet value due for renewal according to Willis is USD74.25 billion (with the next largest being the Air France/KLM Group, at USD35.90 billion; United Continental was USD20.57 billion).

The domestic Chinese market is growing at such a rate and from such a large base now that each year’s incremental traffic growth alone exceeds the actual size of many existing large markets. Moreover, in recent years, China’s safety record has been among the best.

The result was the likelihood that premiums would fall in unit terms.

Similarly, with the large additions to several of the other Asian airlines, unit premiums were expected to moderate for them too.

One quirk of the system, as regulatory authorities extend the working lives of flight crew and as anti-discrimination legislation permeates industries, is that insurance costs for loss of licence coverage.

As the insurer notes, “Many of our clients are currently struggling to come to terms with the effect age discrimination legislation is having on their ability to manage the costs associated with provision of certain benefits. Unchecked, the removal of an employer’s ability to accept age limitations on Loss of Licence coverage is leading to rising insurance costs.  To illustrate this point, lifting age limits from 55 to 60 is likely to increase average claims by 50%.” This impact needs careful consideration, says Willis.

Willis sees premium reduction of 10%, or USD195 million, for the year

Assuming this rate of fall continued, Willis estimates “an overall annual premium reduction of approximately 10% or USD195 million” in 2012, a not insignificant saving for the industry. A reduction of this size would bring gross premiums payable to insurers for the year down to USD1.73 billion.

All is of course not gloom for the insurers. This reduced amount is measured  “against projected calendar year losses of less than USD750 million”.

As Willis notes, with some understatement, “this picture would obviously create a healthy return for insurers, despite the reducing premiums.”

However this is after all the insurance business and there is a dark cloud to every silver lining. Says Willis, “the phrase ‘historical results are no guarantee of future performance' is very applicable to airline insurance. There is obviously no guarantee that the renewing risks with increasing exposures but reducing premiums will produce such good loss performance going forward.”

But there are no guarantees for the future

In other words, just because we have had a couple of very safe years, does not mean that the coming year will be as good – although there is now a fairly lengthy trend towards much greater safety of operation.

So, as Willis goes on to say, “the focus therefore is increasingly on the premium left after the attritional experience to pay for any catastrophe occurring during the policy period.”

In reality, with a profit margin of USD1 billion, the potential for one major incident making a large hole in this is ever-present. While a “new normal” may be emerging, there can be no certainty in a world where, also, the new normal is uncertainty.

The sting in the tail is that, with premiums slipping to these levels – most welcome for airlines looking to cut costs wherever possible – it would not take much to cause some quite substantial increases next year.