IATA cautioned that the next few months at least would see air travel “adversely” hit by external factors, such as a further surge in fuel prices, unrest in MENA region, the impact of the Japanese earthquake and a fall in business confidence during Mar-2011. Passengers travelling on premium and economy seats continued to expand in Feb-2011, albeit at a slower pace.

IATA noted that premium travel held up relatively well in Feb-2011, driven by robust global economic growth although premium traffic growth slowed from 8.1% in Jan-2011 to 7.7% in Feb-2011. Seasonally adjusted, the number of passengers travelling on premium seats fell by 0.1% compared to Jan-2011 levels. This less price sensitive segment – premium travel – has been expanding at an average month-over-month growth rate of 1% during the last six months. While the volume of premium travel is still some 10% below the pre-recession peak it is now 19% above the low point reached mid 2009. IATA also noted that drivers of business travel such as world trade and business confidence, which has been a good coincident indicator in the past for business travel, is still positive. 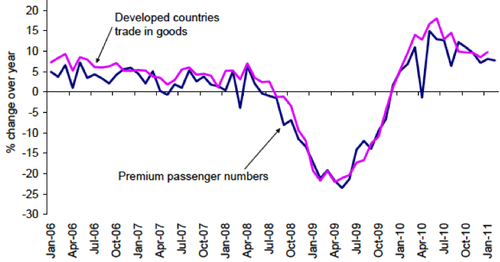 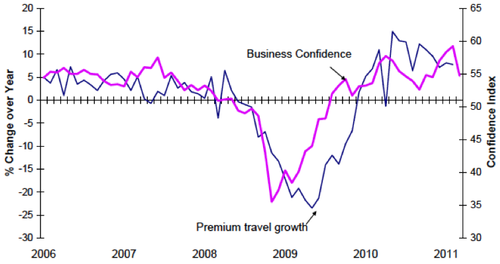 IATA also estimates that premium revenue in Feb-2011 increased by around 15% year-on-year, similar to what was observed in Jan-2011. Airline premium revenues are still some 9% below the pre-recession peak. Average international fares, including fuel surcharges, have continued to rise in recent months as a response to rising fuel costs, which reached USD125 per barrel so far this year. Rising travel cost may cause price-sensitive passengers, such as holidaymakers, to reduce air travel. 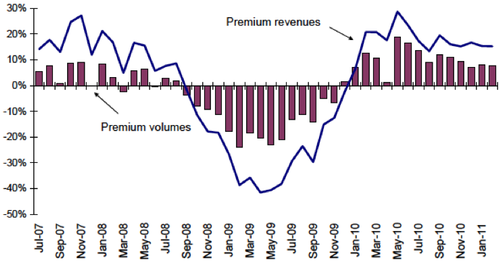 There was a sharper slowdown in the more price sensitive economy seat segment than for premium travel. Economy growth slowed from 4.9% in Jan-2011 to 3.3% in Feb-2011 and has been trending downwards since Oct-2010. Seasonally adjusted, the number of passengers travelling on premium economy fell by 1.0% compared to Jan-2011 levels. The seasonally adjusted number for economy seats was 2% lower in Feb-2011 than in Oct-2010. 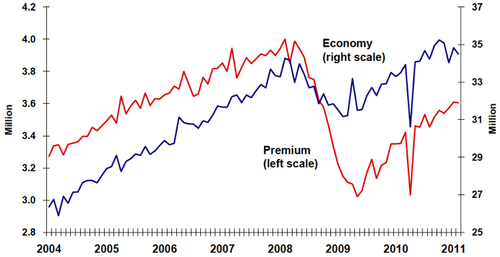 IATA noted that there has been some loss of consumer confidence in Europe and in China although the US consumer experienced a sharp rise in confidence between Oct-2010 and Feb-2011. However, IATA believes that recent economic trends are temporary setbacks to continued expansion. If this is the case, travel growth should resume.

IATA also noted that the 34% rise in jet kerosene prices over that period and the impact on travel costs may now be causing price-sensitive passengers to cut back on air travel. Impacts from the civil unrest in a number of North African and Middle Eastern nations also impacted passenger levels in Feb-2011, as did a distortion caused by the Chinese New Year that began much earlier in the month in 2010. IATA estimates that these events accounted for much of the 0.9% seasonally adjusted decline in total air travel on international markets between Jan-2011 and Feb-2011.

As was the case in Jan-2011, the stronger premium markets continue to be connected to the Asia-Pacific region. Traffic in the Asia Pacific region was boosted by the Chinese New Year, which began on the 3rd of February this year compared with the 14th in 2010. The effect of the Japanese earthquake and tsunami will however depress the March data. 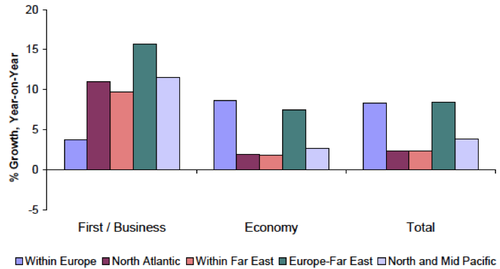 The political turmoil in several African and Middle Eastern countries, which may have reduced worldwide air travel in February by 0.5% in terms of RPKs as previously reported, is evident for some routes. As such, premium travel on Europe-Africa fell to 0.6% in Feb-2011 (from +3.7% In Jan-2011). Similarly the number of passengers travelling on premium seats on Africa-Middle East contracted by 5.7% this month (+7% in Jan-2011). Premium travel Within Middle-East was up by just 0.4%, compared with 10.9% in Jan-2011. 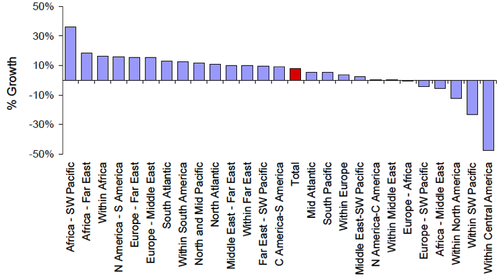 In other parts of the world, several routes showed some expansion compared with Jan-2011. The North Atlantic market, which represents 15% of traffic and 25% of revenue, showed an improvement in premium travel from 6.4% in Jan-2011 to 11% growth in Feb-2011 boosted by strong trade activities in the US. However, economy travel slowed down from 3.8% in January to 2.2% in February.

All routes linked to South America and Within South America continued to expand strongly in February boosted by strong economic conditions and trade expansion in this region. Premium travel Within Europe was sluggish growing by just 3.7% reflecting a reduction of trade activities in Europe. 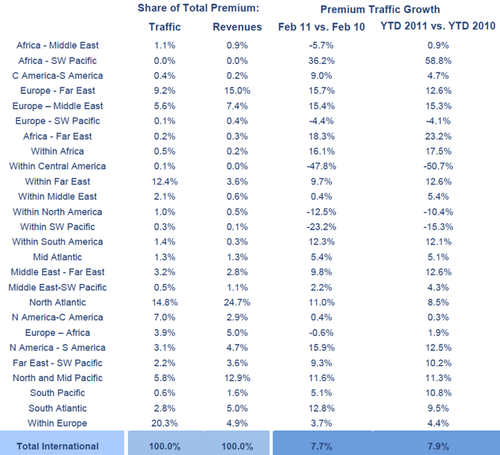