Across the world, premium air travel demand has slackened. And it is hurting the world's airlines.

In the early days of aviation, it was all about the glamour. Images from the 1930s and 1940s evoke an era of silver and linen service, with passengers and crew dressed as if they were in one of Europe’s grand hotels rather than in a noisy metal tube dodging bad weather and landing to refuel on any flight longer than a few hours. As air travel became more popular and affordable, first class cabins remained the domain of the rich and famous, but the advent of business class gave busy executives a haven from their daily stresses and appealed to the ambitions of the aspiring rich and famous.

Now, in the era of low-cost carriers, aviation is mostly about getting from A to B as cheaply as possible. Airlines such as Southwest, Ryanair and AirAsia have led a popular revolution democratising air travel and making it as accessible and common-place as catching a bus.

So where do first class and business class, collectively known as the premium cabins, fit into this new world?

Premium traffic is highly cyclical, but has also suffered a structural hit since the 2009 recession

The first answer to the question above is that premium travel fits in less and less. Successive demand shocks have hit the industry over several decades – the oil price spikes of the 1970s and early 1980s, the recessions that affected the early 1980s, early 1990s and twice in the 2000s. Each of these have caused travellers (and, in particular their employers, who generally pay for the tickets) to question the need to pay between three and six times an economy fare in order to sit in a premium cabin. While each recession is followed by a recovery, premium traffic has tended to suffer a structural loss in demand afterwards.

Taking as an example the most recent global recession of 2009, sparked by the global financial crisis of 2008, the impact on premium and economy travel was markedly different. Year-on-year growth rates for premium traffic fell as low as -24% in May-2009, while the worst growth rates for economy traffic were around -9%. Moreover, premium traffic started to fall before economy traffic, as corporates anticipating the recession started to cut travel budgets. It also started its recovery later than economy traffic, as travel departments remained cautious or were under pressure to hold onto savings. 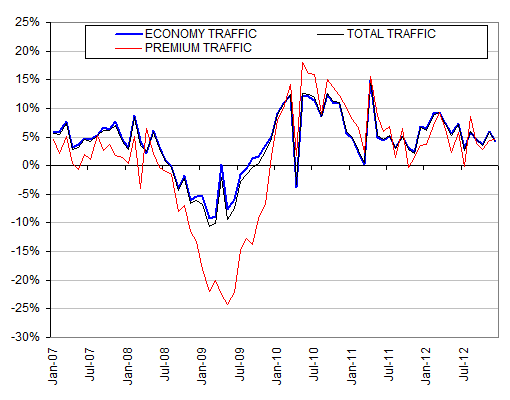 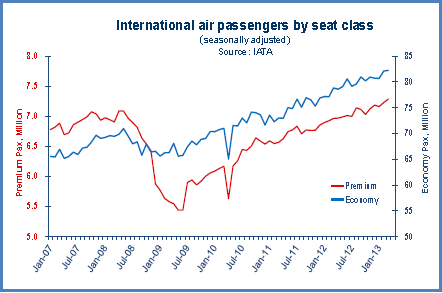 Reduced premium traffic puts a strain on revenues; a 4% drop is a deadly loss

This underperformance by premium cabins has led to a loss of its share of total air traffic. Before the recession, premium represented around 9.5% of total passengers, while now it is around 8%, after recovering partially from a 2009 low point of around 7.5%. This structural reduction in share of around 1.5ppts in market share might not sound like a big number, but it is equivalent to a reduction of more than 15% in the number of premium passengers that would have been flying today if premium had retained its 9.5% share of the total.

Moreover, given that premium fares are typically a multiple of four times economy fares, the loss in revenue is significant – around 4% of total revenues, all other things being equal (see schematic below). This is an important revenue reduction in an industry with such slim margins.

Schematic representation of revenue impact of reduction in premium traffic from 9.5% to 8.0% of total

Data for the week of 20-May-2013 from Innovata show that first class and business class seats account for 6.2% of seats worldwide. This is lower than the 8% of passengers reported by IATA, suggesting either some differences in the methodology to gather the data, or superior load factors in premium cabins (or both of these things). 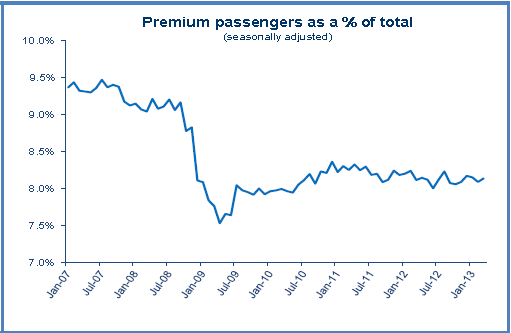 The North and Mid Pacific, which was hit hard in the recession, has also seen above average premium traffic growth, driven by strong economic growth in the Far East. 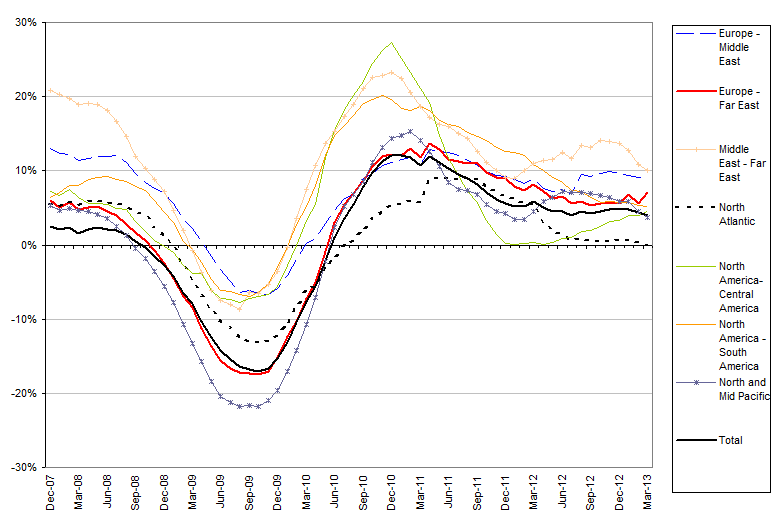 North Atlantic takes biggest share of premium traffic, but is in decline

Also worrying for European (and US) carriers is the underperformance of premium traffic growth on the North Atlantic, which accounts for the highest share of premium revenues of any route region.

While this slow growth reflects tight capacity growth on the North Atlantic, the route has seen its share of premium traffic and premium revenues fall since 2010. 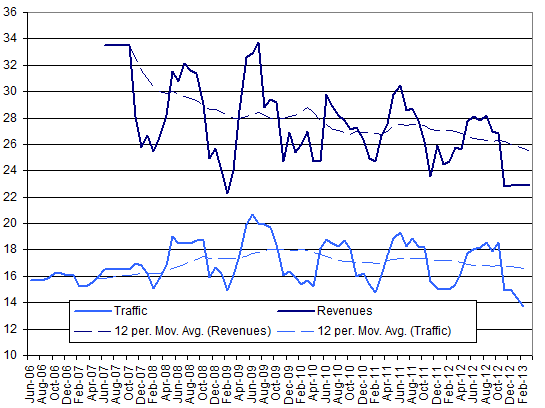 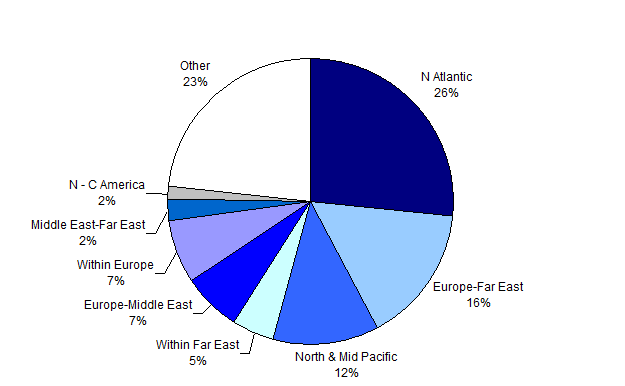 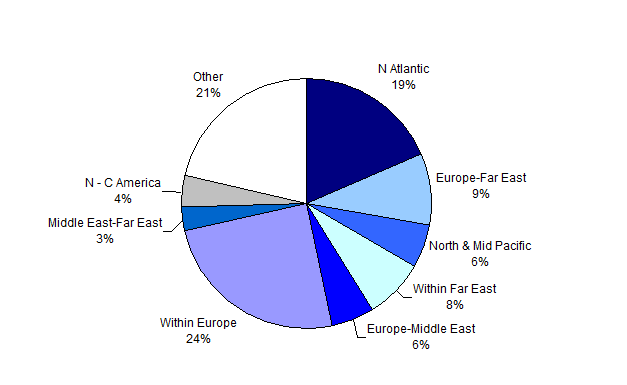 Within Europe remains the most important region by share of global premium traffic (rather than share of premium revenues), but it has seen only minimal growth over recent months, as a result of the difficult economic conditions. European travellers also generally face short journey times, on which premium fares are hard to justify.

Moreover, full service carriers face considerable LCC competition in Europe, many of whom are now robustly challenging for business passengers. 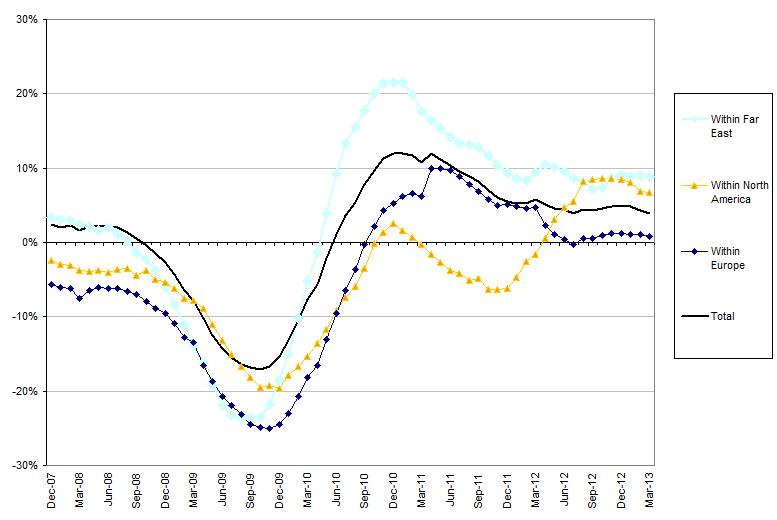 Distribution of seats among the four classes varies by airline

One of the results of the improved flat bed business class product that is now almost universal among the world’s major long-haul carriers was to reduce demand for first class long haul. The product quality gap between business class and first class was reduced by flat beds, making it harder for some passengers to justify the gap in fares.

Comparing the distribution of seats across the four classes for selected major full service carriers in the principal aviation regions (based on Innovata data for the week of 20-May-2013) reveals some notable differences. Overall, most of the major global carriers have a higher proportion of premium cabin seats than the worldwide average. Of course, this is because the worldwide totals include single cabin low-cost carriers, but also reflects the importance of premium traffic to the business model of major full service carriers.

This importance stems both from the branding benefits of premium cabins and also from their economic contribution to the airlines. Long-haul services rely on a cross-subsidy from premium passengers to economy passengers for their financial viability. This is one of the reasons why long-haul low-cost airlines have struggled to establish themselves in the same way as on short-haul.

Even Michael O’Leary, CEO of ultra low-cost Ryanair, when talking about the possibility of setting up a long-haul operation has acknowledged the need to attract high yield premium passengers. His plan for a trans-Atlantic operation involves economy fares priced at EUR10 one-way and a very high quality business class charging EUR4,000 to EUR5,000. 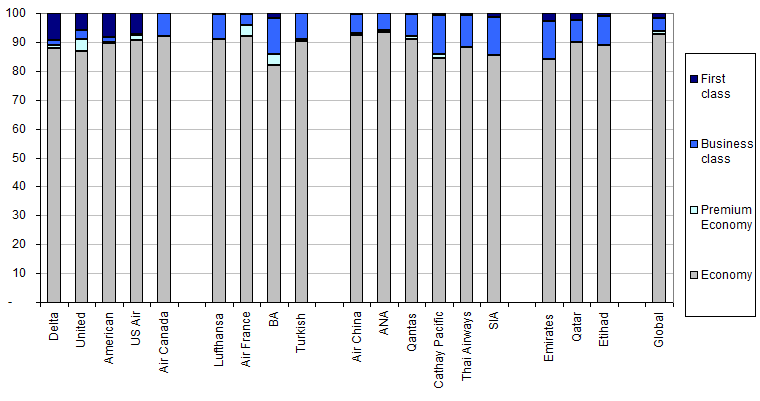 To a large extent, the US attachment to first class is more about perception and nomenclature than product. The first class cabins on most US domestic routes are not very different from business class cabins within Europe, for example.

Emirates, SIA, BA and Cathay Pacific have a high proportion of premium seats

The four carriers that stand out as having high proportion of premium seats are Emirates (15.8%), Singapore Airlines (14.5%), British Airways (14.3%) and Cathay Pacific (14.2%). When premium economy is included, BA has 18% of its seats available for higher yield passengers, twice the level of its major European competitors.

Given the extreme sensitivity of premium traffic to the economic cycle, this high focus on premium traffic should make these four carriers, and BA in particular, the most exposed to a downturn and the most geared to a recovery.

However, the relative weakness of the North Atlantic and the within Europe premium markets should be a cause for concern for BA and the other European FSC majors. Moreover, the loss of share of premium traffic relative to economy traffic provides a revenue headwind for all long-haul FSCs that has had to be countered with cost reduction and other restructuring measures.

Selected major full service carriers percentage of seats in premium cabins and premium economy (% of seats): 20-May-2013 to 26-May-2013 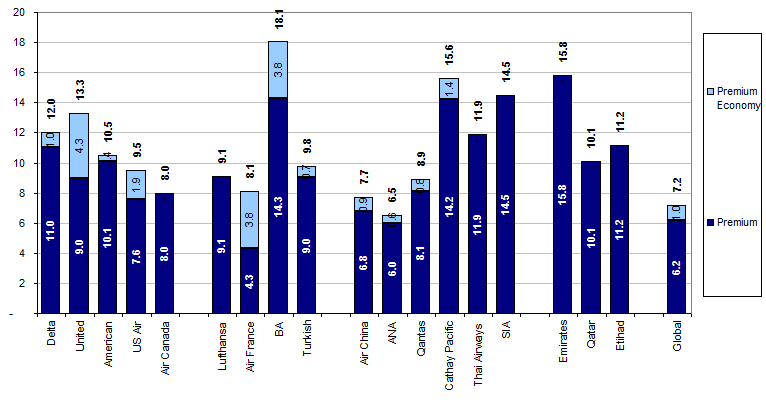