Two of the largest commercial aircraft engine manufacturers, Pratt & Whitney and GE Aviation, have both announced plans to close plants and cut jobs in North America over recent weeks, citing the global economic slowdown as the root cause.

Pratt & Whitney Canada (P&WC) announced plans to cut 250 employees by the end of 2009, to “align with a projected decline in customer demand and weakness in the global aerospace market, with no signs of a recovery in 2010” - a forecast that is definitely one of the most negative of the major engine manufacturers.

The company will also close a Quebec facility by the end of 2010, transferring work to other P&WC facilities in Montreal and cutting an additional 160 employees from early 2010. P&WC plans to consolidate its activities into three key strategic manufacturing and aftermarket facilities in Quebec.

John Saabas, President of P&WC, stated that the company needs “strategic decisions and structural changes to remain competitive and preserve our future in the face of continuing economic headwinds."

Strong order backlogs have propped up the Canadian aerospace manufacturers, but the sector is expected to marginally reduce output over the next 24 months, predominantly due to declining demand for business aircraft, which has severely affected the country’s largest manufacturer, Bombardier.

Meanwhile, General Electric confirmed this week that it would close its GE Aviation facility in Albuquerque during 3Q2010, with the termination of more than 400 jobs commencing in Jul-2010. The manufacturer had delayed the decision, considering an economic incentive package put together by the state government, as well as more than USD30 million in concessions by unions, but inevitably decided to close the plant due to general economic weakness and reduced ordering.

Across the Atlantic, Rolls-Royce is forecasting a modest recovery in both world GDP and air passenger traffic in 2010, although the manufacturer does not expect a strong rebound to occur until 2011. Any recovery by airlines is expected to lag the general business upturn.

The European engine manufacturer expects to see continued high levels of aircraft retirements through 2009, after a record year of retirements in 2008, pushed by high fuel prices. Load factors and aircraft productivity are also expected to improve from troughs.

Meanwhile, aircraft leasing companies slid backwards in trading yesterday, with Aircastle down 3.6%. The soon to be merged AerCap and Genesis Lease both dropped 1.8%. Babcock & Brown Air (+0.4%) and AeroCentry (+6.9%) were the exceptions. 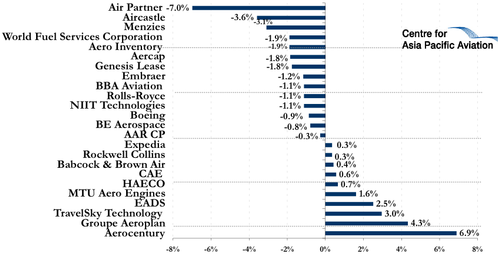