Small Canadian carrier Porter Airlines during 2011 celebrated its fifth anniversary by recording its first annual profits as rival Air Canada spent most of the year embroiled in contentious labour negotiations with employees that have escalated into employees participating in work slow-downs during the last couple of months. In contrast, so far during 2012 Porter has enjoyed steady increases in its traffic as it continues expansion of its route network. But the carrier could start to see pressure next year in some of its markets as WestJet prepares to launch a regional subsidiary operating the same size aircraft as Porter, which could create challenges for the carrier in sustaining its new-found profitability.

Porter CEO Robert Duluce recently told The Ottawa Business Journal that Porter enjoyed its first profitable year in 2011 and expects to remain profitable this year. Porter reached its profitability milestone while some if its key business markets came under intense pressure.

In May-2011 Air Canada launched 15 daily flights from Porter’s Toronto City Centre base and WestJet essentially doubled its daily frequencies from Toronto Pearson to Montreal and Ottawa. WestJet took cues from Porter’s product strategy, offering free alcoholic beverages and also allowing passengers on those flights to take earlier or late flights with no change fees.

WestJet is intensifying competition in the Toronto-New York market in June when it launches flights from Toronto to New York LaGuardia. In an answer to WestJet’s plans Porter beginning this month is adjusting its schedule on flights from its Toronto City Centre base to Newark Liberty International airport, offering up to 13 daily departures on the pairing as part of improving arrival and departure times in the market. 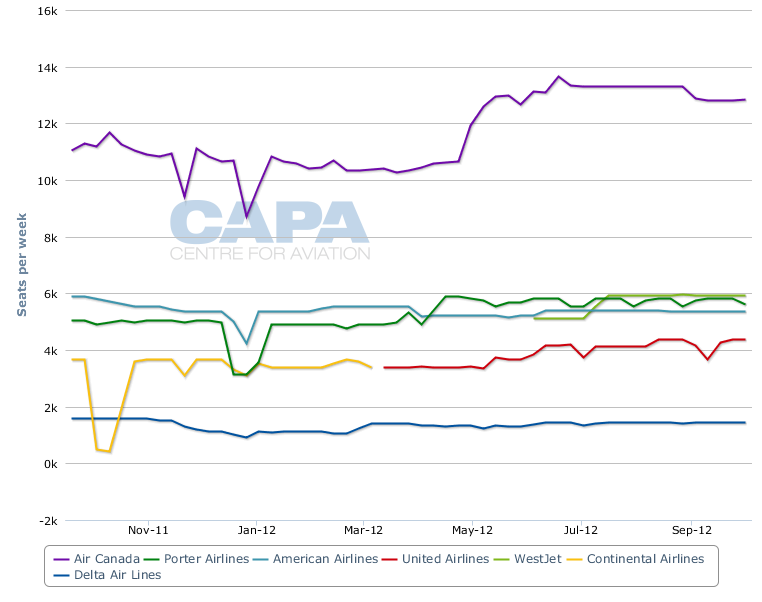 Porter launched in 2007 with a focus on convenient travel for business travellers from its downtown City Centre base, much to the ire of Air Canada and its regional partner Jazz. Those carriers spent nearly four years fighting the courts to regain access to City Centre after Jazz lost access to a terminal owned by an affiliate of Porter. Air Canada regained access to the airport in 2010 and launched 15 daily flights to Montreal in May-2011. Ironically, Air Canada selected Skyservice as its partner to operate the Bombardier Q400 flights instead of Jazz, its long-standing partner in its flight to return to City Centre.

But even as Air Canada intensified competition in the Toronto-Montreal market, Porter’s traffic remained steady. The carrier posted record traffic increases from Jun-2011 through Aug-2011 even as Air Canada inaugurated flights from City Centre. Porter’s load factor for 2011 averaged 62% as six new Q400s entered its fleet. In 2011 its traffic grew 36% on a 19% increase in capacity. During the first quarter of 2012, Porter’s load factor averaged 57.3% on 45% traffic growth and a 29% increase in capacity. Loads during the first quarter were well above the 30%-35% load factors cited by Bombardier as the breakeven mark for the Q400. Porter in a prospectus released in 2010 ahead of an anticipated initial public offering stated its breakeven load factor in 2009 was roughly 49%. 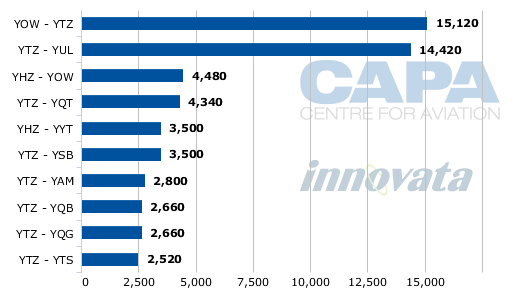 Over the years, Porter has balanced out its business-oriented markets with leisure destinations to even out its base of traffic among its 19 destinations. It has introduced seasonal flights to Burlington, Vermont; Myrtle Beach, South Carolina; and Mont Tremblant in Quebec. That service was introduced alongside more traditional business markets including the US cities of Boston, New York and Chicago. Porter in Apr-2012 added its sixth US destination, Washington, DC, with the launch of flights from Toronto to Washington Dulles Airport. The carrier also added new flights from Toronto to Timmins in Ontario in Jan-2012. 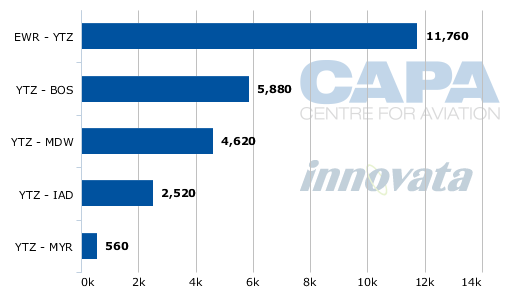 In Feb-2012, Porter unveiled plans to debut a new package business to build on its growing base of leisure passengers. The carrier stressed all of its destinations are candidates for the Porter Escapes packages, but the initial focus is on its three major leisure destinations of Myrtle Beach, Mont Tremblant and Burlington along with larger markets including Toronto, Ottawa, Quebec City, Montreal, Boston, New York, Washington and Chicago. Porter expects to begin package sales sometime in the current quarter. 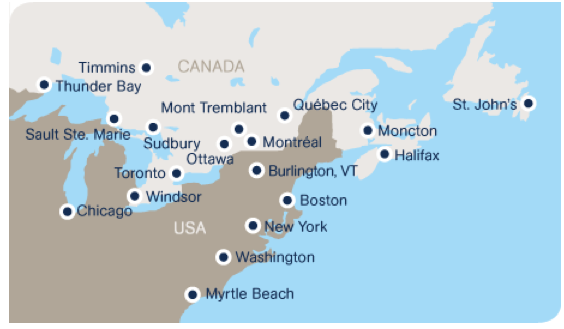 In tandem with new route launches, Porter has also worked to expand capacity in its core markets from Toronto to Montreal, Ottawa, New York. Additionally, Porter offers point-to-point flying from Ottawa to Halifax and Moncton and Halifax to St Johns and Montreal. In the past, Porter has stated its long-term strategy is to expand its point-to-point short-haul network as it concluded ample market potential exists within the 800 mile range of the Q400 from its focus cities of Toronto, Montreal and Halifax.

WestJet’s new subsidiary could be a threat

It appears WestJet has made similar conclusions about the Canadian short-haul market and intends to base its new regional subsidiary in Calgary and Toronto. The carrier is evaluating the Bombardier Q400 and ATR 72 turboprops, and aims to make a decision between the two aircraft sometime this year to support the planned 2013 launch of its new regional carrier.

WestJet has not identified markets for its new carrier, but has cited several examples of cities that would benefit from its expanded service. Those destinations include Cranbrook, Prince Rupert, Fort Saint John, and Dawson Creek in British Colombia; Lethbridge, Alberta; Brandon and Thompson in Manitoba; Saguenay, Quebec and Sudbury, Sarnia and Timmins in Ontario.

Porter launched three daily roundtrip flights from Toronto to Timmins in Jan-2012 and introduced a single daily roundtrip flight to Sudbury in 2010. It is not clear if there is enough demand to support potential WestJet flights in those destinations since both Porter and Air Canada serve those markets from Montreal. It is possible that Calgary could feature more prominently in the operations of WestJet’s new subsidiary in the beginning since Calgary is WestJet’s main hub. WestJet will likely want to keep the Q400s close to its main base of operations in the beginning in order for its subsidiary to adjust to turboprop operations. There could also be more feed initially from Calgary for WestJet’s new short-haul operations.

But WestJet has had a strong focus on Toronto during the last year, and the carrier could opt to quickly enter short-haul markets that would provide additional passenger feed in its agreements with its five codeshare partners that include American Airlines and Delta Air Lines. Porter has also stated its desire to forge codeshares, but currently has no partnerships in place. WestJet’s move could accelerate Porter’s plans to court potential codeshare partners.

WestJet plans to grow its regional operation to 40 aircraft, which will give Canada’s second largest carrier significantly more scale in the Canadian domestic and transborder markets, and make Porter an even more distant third in the Canadian airline line-up. But Porter could also see some benefit from Air Canada’s unpredictable operations during the last couple of months that triggered labour strife. Some loyal frequent flyer members may decide their status is of little help if schedule disruptions continue.

For the moment, Porter is pushing full-steam ahead as CEO Robert Deluce declares the carrier is proud of what is has accomplished so far and is “ready to make our mark in 2012”.