Panglao Island is one of the most popular, and fastest growing, tourist destinations in the Philippines, and Bohol International Airport on the island is preparing to open for commercial operations in Aug-2018.

The new airport is expected to generate a significant increase in visitor numbers to Panglao as the island becomes more accessible, particularly for international tourists. Panglao attracts over 600,000 annual visitors, but only approximately one third of the visitors are foreigners.

Panglao is a short drive from Tagbilaran Airport, which will be closed and redeveloped after the new airport opens. Tagbilaran is a much smaller airport and space-constrained because of its location near the centre of Tagbilaran, the capital of Bohol province.

Up and coming destinations and new secondary airports in Southeast Asia will be a topic of a panel discussion at the CAPA Asia Aviation Summit in Singapore on 8/9-Nov-2018. For more details on the summit click here.

Bohol Airport will be much larger than Tagbilaran Airport

The Tagbilaran Airport handles approximately 800,000 passengers annually. It is currently the twelfth largest airport in the Philippines based on seat capacity.

Bohol International Airport will have initial capacity to handle more than 3 million passengers per annum. The airport is being built on a 230 hectare site with a 13,000 square metre terminal capable of handling seven aircraft and a 2500m night rated runway. There are already plans to extend the runway to 2800m after the airport opens.

The new airport is reportedly nearly complete and will open in Aug-2018. An exact opening date has not yet been fixed but could be set with little advance notice as flights are simply being moved from the existing airport. The new airport is initially being managed by the federal government, pending a planned privatisation.

Bohol International Airport expects to handle approximately 2 million passengers within the first couple of years, which would make it one of the ten largest airports in the Philippines. The airport should therefore support a large increase in visitor numbers for Panglao and Bohol province.

Bohol overall attracted 1.1 million visitors in 2017, with more than half of them staying in Panglao. Some visitors to Bohol now travel via Cebu, the second largest city in the Philippines. The fastest ferry from Cebu to Tagbilaran is close to two hours. As more direct flights are launched, a smaller proportion of Bohol visitors will travel via Cebu.

The Philippines has been promoting Panglao and several other alternative beach destinations as part of an initiative to boost tourism.

A large proportion of foreign tourists that were intending to travel to Boracay during the closure period have decided to holiday in other countries because most of the existing alternative destinations have limited capacity – both in terms of flights and hotel rooms. However new and upgraded airports, along with the promotion of alternative destinations, is an important long term investment.

It will also take time for the new airport on Panglao to ramp up and attract flights, in particular international flights. As the new airport is opening only two months before Boracay reopens it will not likely benefit much from the closure of Boracay, which has impacted traffic at Caticlan and Kalibo airports.

Cebu Pacific plans to increase frequencies in the Bohol market

There are now more than 25,000 weekly seats at Tagbilaran Airport, which represents an all-time high level of capacity. The launch of five new services from the Cebu Pacific and PAL groups in 2017 is an indication of the surging demand for travel to and from Bohol, in particular Panglao.

The PAL, Cebu Pacific and AirAsia groups currently have nearly identical domestic seat capacity shares (32% to 34% each) at Tagbilaran. When the only international flight is included, the PAL Group is the overall market leader by a slight margin. 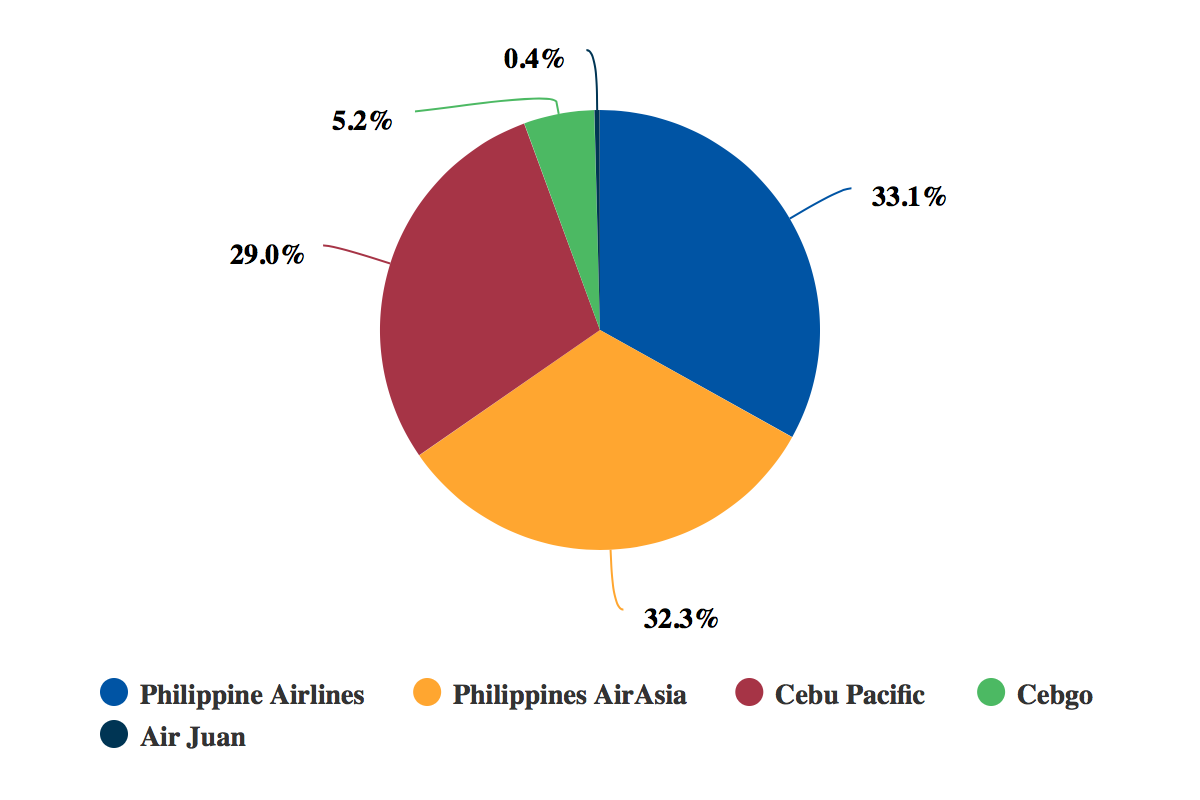 Airport and tourism authorities expect the new airport to attract several more international services. AirAsia, Cebu Pacific and PAL are all considering the launch of new international routes from Panglao, and PAL is also expected to transfer the current Seoul service to the new airport.

Several new international airports to open in the Philippines

On 1-Jul-2018 Mactan-Cebu International Airport also opened a new terminal, which will support further international expansion. Cebu’s international passenger traffic increased by 30% in 2017 and has doubled since 2014.

The Philippines has several islands with huge growth potential, but historically most overseas tourists have focused on Boracay, Cebu and Manila. Other destinations such as Bohol, Cagayan de Oro, Palawan and Siargao have attracted domestic tourists, but accessibility issues have limited international traffic. The development of several new airports and expansion of existing airports is improving accessibility significantly.

Palawan tourism to benefit from new airport construction as well

For example, there are plans for a second international airport in Palawan to improve access to the resort town of El Nido and the north end of the island. Puerto Princesa is a five hour drive from El Nido, which is famous for its beaches and dive sites.

There are also plans to expand the airport at Siargao to enable jet operations and potentially international flights. The current airport at Siargao (which is known for its surfing) can only handle regional aircraft, but has experienced a surge in traffic over the past couple of years.

Opening more international airports is part of a government strategy to reduce reliance on congested Manila and to boost tourism. However, almost all international passengers will continue to arrive at Manila and Cebu, which currently account for over 90% of international seat capacity in the Philippines.

Potential investors in the Bohol International Airport and other new international airport projects may be wary that the ambitious traffic projections may not materialise.