A surging economy and the Philippines emergence as a popular tourist destination have driven rapid growth over the last three years. Visitor numbers to the Philippines have increased by 11% for three consecutive years. 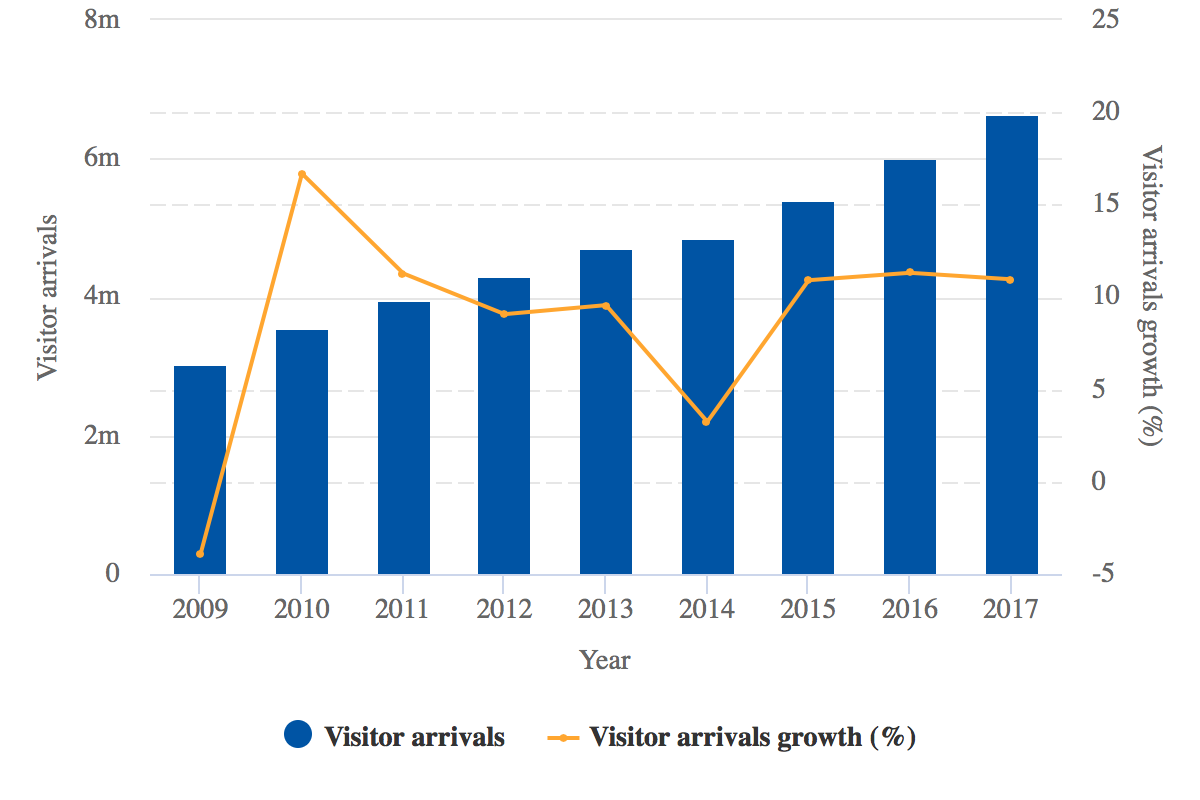 During the same three-year period international passenger traffic has grown by 36%, from 17.92 million in 2014 to 24.43 million in 2017, according to Philippines Civil Aeronautics Board (CAB) data. This indicates that the growth in tourism and the number of Filipinos travelling abroad have grown at nearly identical rates.

Visitors account for slightly more than half of the total international passenger traffic and Filipinos (including overseas workers) account for slightly less than half. There is very little international transit traffic in the Philippines, although Philippine Airlines (PAL) is starting to pursue more sixth freedom passengers, targeting selected markets such as Australia-UK.

PAL international traffic up 61% over the past four years

The PAL Group’s scheduled international traffic increased by 13% in 2017, to 6.9 million passengers, according to Philippines CAB data. This includes the regional subsidiary PAL Express, although PAL Express is predominantly a domestic operator.

The PAL Group’s international traffic over the past four years has increased by 61% while the total market has grown by 41%. PAL currently serves 40 international destinations compared to only 24 in late 2012.

LCCs and Gulf airlines have pursued rapid expansion in the Philippines over the past several years. PAL has expanded in the international market at broadly the same pace as its competitors, doubling its international passenger traffic over the past decade at the same time as the overall market has also doubled in size.

Cebu Pacific has grown faster, quadrupling its international traffic over the past decade, but on a much smaller base.

Philippines AirAsia (PAA) has also entered the market, launching in 2012 and buying a stake in the previously independent LCC Zest Airways in 2013. PAA and Zest AirAsia completed a merger in 2013. However, AirAsia is a relatively small player, capturing only a 6% share of the international market in 2017 (compared to 4% in 2016).

Foreign airlines have expanded at a relatively slower rate, growing traffic by approximately 60% over the past 10 years. Foreign airlines accounted for 47% of total international traffic in the Philippines in 2017; their market share was 66% in 2006, and has since declined steadily. However, these figures are somewhat misleading as foreign airlines have continued to expand, particularly airlines from the Middle East and North Asia, pressuring Philippine carriers. 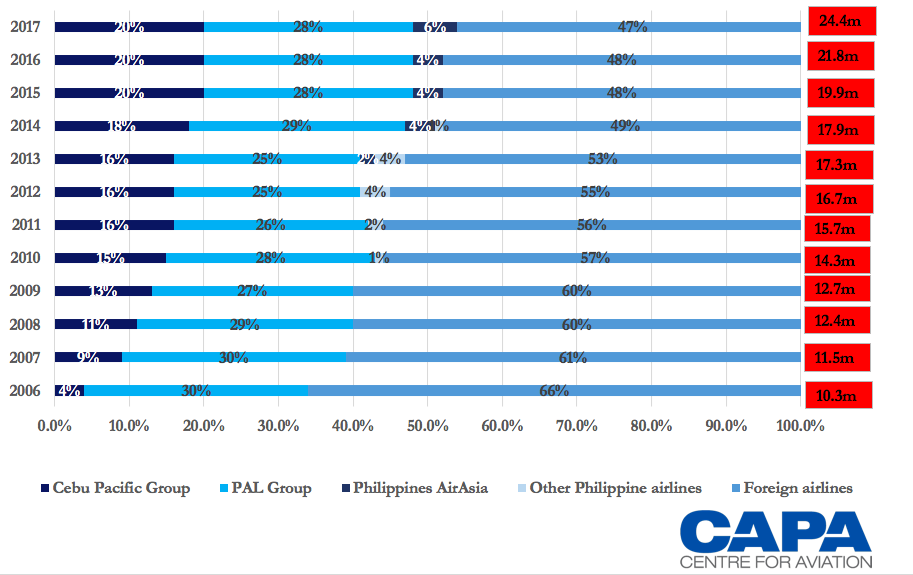 Yields have declined in virtually all international markets over the past year. PAL was back in the red in 2017, incurring an operating loss of PHP2.6 billion (USD51 million), following profits in 2014, 2015 and 2016.

Mr Bautista said PAL’s international load factor in 2017 was approximately 70%. The airline’s average load factor was dragged down by its Europe and Middle East network, although its load factor in these markets was still above 60%.

PAL has tried to improve its performance in London, its only destination in Europe, by upgrading the daily service in late 2017 from A340-300s to 777-300ERs. While the 777 is more efficient and provides passengers with a better product, it has resulted in a 46% capacity increase in a market that was already experiencing low load factors. PAL is keen to attract more sixth freedom passengers in the London market, particularly from Australia (where it is expanding), but such traffic typically comes at the expense of yields.

PAL has tried to improve its performance in the Middle East by reintroducing a business class product and decoupling flights. PAL now serves all its destinations in the Middle East nonstop from Manila with two-class 368-seat A330-300s, featuring 18 lie-flat business class seats and 350 economy seats. At the beginning of 2017 PAL was operating 414-seat all-economy A330-300s on all Middle East flights and three destinations were served with one-stop tags.

Bookings and yields have improved, but PAL’s Middle East operation remains unprofitable. It will be extremely difficult for PAL’s Middle East operation to turn the corner, given its relatively large size (six destinations following the recent temporary suspension of Kuwait and over 20,000 weekly return seats during most of the year) and the current highly competitive environment.

Cebu Pacific dropped all three of its four Middle East destinations in 2017, deciding it was better off reallocating A330 capacity to better-performing regional international markets.

In 2H2017 the LCC upgauged flights to Bangkok, Hong Kong, Tokyo Narita, Seoul Incheon and Taipei from A320s to A330s. It also upgraded Sydney to daily for the peak northern summer season.

In 4Q2017 Cebu Pacific’s year-over-year capacity in these six markets increased by 16%, to 70%. Tokyo Narita had the highest capacity increase, at 70%, as Cebu Pacific introduced a second daily flight (with A320s), in addition to upgauging the existing flight from A320s to A330s.

Cebu Pacific was able to maintain higher than average load factors on most of the routes, despite large capacity increases. Its load factor in the Tokyo market slipped to 69% in 4Q2017 but Cebu Pacific was pleased with this performance given the huge increase in capacity and believes the increased capacity will be fully absorbed in 2018.

Cebu Pacific’s average international load factor in 2017 was 77%, which is relatively low for an LCC but still significantly higher than PAL’s load factor. The Philippines international market is highly seasonal, making it difficult for any airline to achieve a high year-round load factor.

Cebu Pacific and PAL to continue international expansion in 2018

Cebu Pacific’s international passenger traffic increased by almost 10% in 2017, enabling it to maintain a 20% share of the Philippines international market for the third consecutive year.

Cebu Pacific is planning to increase international seat capacity by 13% to 15% in 2018, which should once again enable it to maintain 20% market share as the overall market continues to grow rapidly. Cebu Pacific is expanding its A320 family fleet by seven aircraft in 2018; the growth aircraft are all A321s, which will be used to upgauge flights from A320s while the A320s are freed up for additional frequencies on existing routes, or new routes.

PAL is also continuing to expand in the international market in 2018 as it takes delivery of six A321neos and four A350-900s. PAL plans to use the A321neos to expand in Australia and launch services to India, while the A350s will be used to add capacity to North America.

PAL’s North America operation had been profitable for several years, but intensifying competition from North Asian airlines over the past two years has pressured yields. While PAL maintains a relatively high load factor on its North American flights, the operation is no longer profitable.

Cebu Pacific has evaluated acquiring new generation widebody aircraft to launch long haul flights to North America but has indefinitely shelved any consideration after concluding that yields are too low – even for an LCC.

Ironically, PAL is performing better in international markets where it faces significant competition from Cebu Pacific – namely regional international routes. North Asia has continued to be profitable for PAL, despite significant expansion from Cebu Pacific. PAL also continues to do relatively well in the Thailand and Singapore markets, despite strong LCC competition.

PAL has not benefitted significantly from Cebu Pacific's reductions in the Middle East and it is no longer cashing in on its status as the only nonstop airline in the large Philippines-US market. The reality is that PAL has been more impacted by aggressive full service airlines from the Middle East and North Asia than by LCCs.

Market conditions appear to be similar in 2018. PAL incurred a PHP929 million (USD19 million) operating loss in 1Q2018, a 50% increase compared to the loss from 1Q2017, with unprofitability across the long haul network again the main contributor.

The regional international market remains strong, boosted by growing inbound demand from North Asian source markets along with growing outbound demand as the Philippines economy continues to expand rapidly. Long haul markets are experiencing some demand growth, but not nearly as fast as the regional markets – and not nearly enough to alleviate the competitive pressures significantly.