The Philippines has had one of the fastest growing economies in Asia over the past few years. Demand for air travel has naturally increased, but domestic traffic has increased at a rate slightly slower than GDP.

Slot restrictions at Manila make it difficult to keep up with rising demand: domestic traffic at Manila increased by only 2% in 2017, whereas the total domestic market increased by 6%.

Two of the three main domestic competitors in the Philippines, AirAsia and Philippine Airlines, have been focusing expansion at secondary airports such as Cebu and Clark. Market leader Cebu Pacific has paused its domestic expansion in the past two years, resulting in market share declines, but is re-accelerating growth in 2018 as it takes seven high density A321s.

Philippines domestic market expanded by 6% in 2017

The Philippines domestic market grew by 6% for the second consecutive year in 2017, reaching 24.8 million passengers, according to Philippines Civil Aeronautics Board (CAB) data.

The Philippines domestic market has tripled over the past 12 years, from only 8.5 million passengers in 2006. However, passenger traffic had been flat at slightly over 20 million from 2012 to 2014, before growth resumed in 2015 with a more than 8% increase.

In the 2006 to 2012 period LCCs drove rapid growth as the market expanded by nearly 150% in only six years. The LCC Cebu Pacific overtook the Philippine Airlines (PAL) Group to become the domestic market leader in 2009. 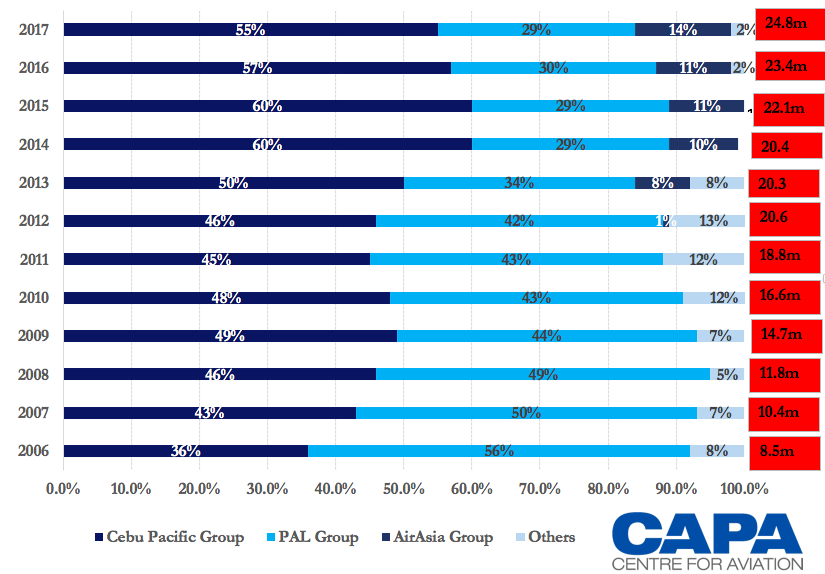 Source: CAPA - Centre for Aviation and Philippines Civil Aeronautics Board.

Later in 2013 Zest adopted the AirAsia brand but operated separately until a merger with PAA was completed in 2015, resulting in a single operator's certificate. AirAsia maintained a 10% to 11% share of the Philippines domestic market from Mar-2013, when it forged the tie-up with Zest, until 1H2017.

PAA reported a 32% increase in total passenger traffic in 2017, to 5.3 million, which indicates broadly equivalent domestic and international growth. The LCC was profitable for the first time in 2017, albeit only marginally, as it expanded its fleet from 14 to 17 A320s.

PAA plans to add another six A320s in 2018, which should enable it to expand its domestic market share further. Four of these aircraft have already been delivered, according to the CAPA Fleet Database.

The AirAsia Group stated in its FY2017 results presentation that PAA’s domestic market share had reached 18.3% in 4Q2017, which was a 4.9ppt increase compared to 4Q2016. PAA reported a 48% increase in total passenger traffic in 4Q2017 as it accelerated expansion.

PAL’s growth in 2015 and 2016 was driven primarily by the launch of several new point-to-point domestic routes from Cebu. PAL continued to expand its domestic network in 2017 but focused more on Clark.

PAL has much lower load factors than Cebu Pacific or PAA

It is somewhat surprising that PAL was only able to grow domestic traffic by 2% in 2017 as its capacity increased at a faster pace. PAL does not report domestic load factor data, but there has been a decline as it has expanded at Cebu and Clark.

PAA does not break down domestic and international load factor data but its overall load factor in 2017 was flat at 87%. Cebu Pacific’s domestic load factor decreased in 2017 by 1.8ppts, to 86.8%. Capacity increased by nearly 6% driven by new point-to-point turboprop routes as the group expanded its turboprop fleet.

Cebu Pacific is planning to re-accelerate domestic expansion in 2018, driven by the upgauging of flights on trunk routes from A320s to A321s. Cebu Pacific decided not to pursue significant domestic capacity expansion over the past few years while it took a break from expanding its narrowbody fleet pending the arrival of higher density A321s.

The fleet of seven A321ceos will mainly be used in the domestic market, generating a 28% capacity increase on each flight upgauged from the A320. The A321s will all be based in Manila, where Cebu Pacific (and other Philippine carriers) have been unable to add frequencies due to slot restrictions. All seven of the aircraft are growth aircraft and therefore free up A320s for expansion in other markets.

Cebu Pacific expects a system-wide seat capacity increase in the “low teens” (between 13% and 15%) for 2018, with similar domestic and international growth rates. Cebu Pacific therefore should be able to regain some of the domestic market share it has lost over the past three years.

Cebu Pacific to grow again in Manila, and possibly Cebu

In particular, Cebu Pacific should be able to gain market share at Manila, which would be a significant achievement as the average yield on Manila routes are typically higher than point-to-point routes from secondary hubs such as Cebu, Clark or Davao.

The Cebu Pacific Group currently accounts for approximately 51% of domestic seat capacity at Manila compared to 29% for PAL and 21% for PAA.

Cebu Pacific’s domestic capacity share at Manila has declined over the past three years but the declines have been larger at Cebu, its second largest hub. 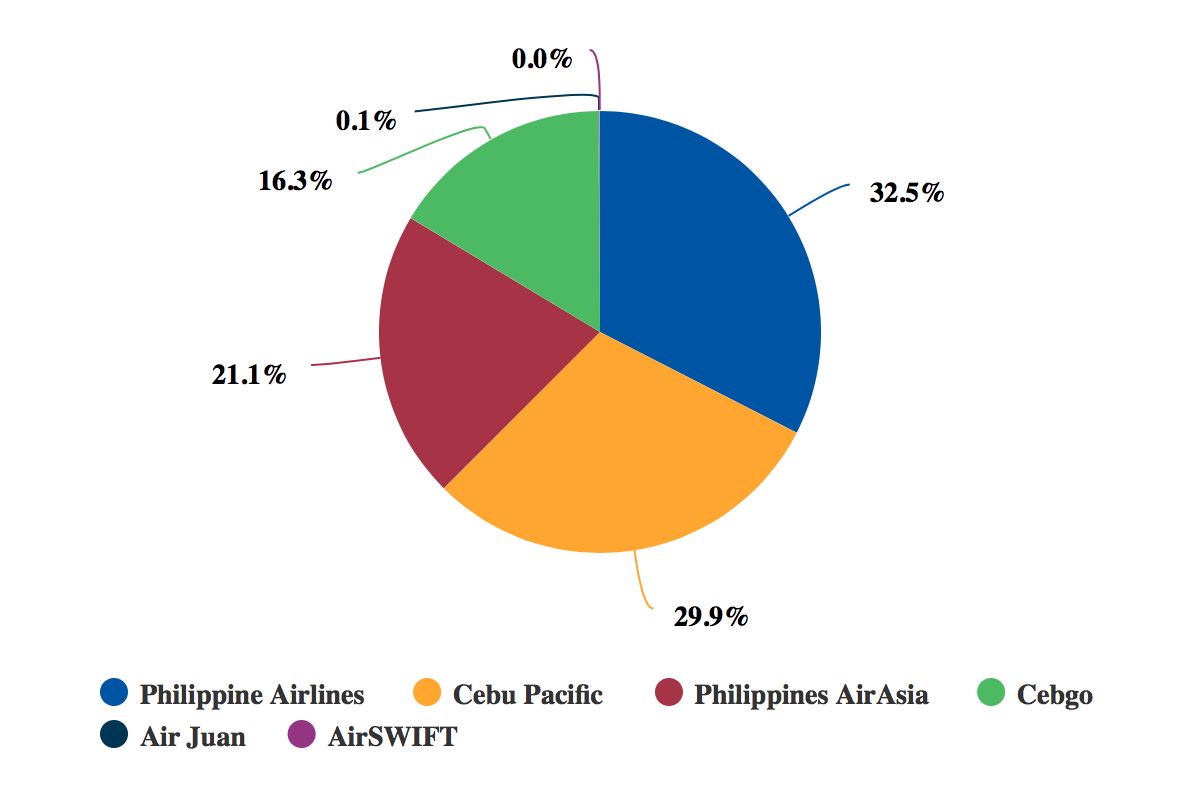 Cebu Pacific’s domestic capacity has been broadly flat at Cebu in recent years whereas AirAsia and PAL have expanded, providing new competition for Cebu Pacific on several routes. Cebu Pacific is now considering resumption of domestic expansion at Cebu although, at least for short term, its priority and focus is on adding capacity at Manila through upgauging.

Secondary cities account for most of the growth domestically

Domestic passenger traffic at Manila grew by only 2% in 2017. The growth rate would have been much higher at Manila if it had not been for slot restrictions.

Cebu, the second largest airport in the Philippines, recorded 8% domestic passenger growth in 2017. Domestic traffic at Cebu has grown by 34% over the past three years, driven primarily by the launch of point-to-point routes from PAL and (to a lesser extent) AirAsia. However, Manila still has three times more domestic traffic than Cebu.

The fastest growing domestic airports in 2017 were Clark and Caticlan. Clark, which is located 100km from central Manila, has benefitted from the congestion at Manila. Clark’s domestic traffic increased sevenfold in 2017, to 431,000 passengers, but on a very low base.

Seat capacity at Caticlan nearly doubled in 2017 due to the opening of an extended runway in late 2016. The extended runway enabled Caticlan to accommodate narrowbody jets, prompting AirAsia to launch services and Cebu Pacific and PAL to upgauge their Manila-Caticlan flights from turboprops. The growth on the Manila-Caticlan route accounted for virtually all of the 2% domestic traffic increase at Manila in 2017.

However, Caticlan will experience a sharp decline in traffic in 2018 because of the closure of nearby Boracay Island. Kalibo will also experience a large decline as almost all Kalibo passengers are visitors heading to Boracay.

Domestic growth should remain strong in 2018, despite Boracay closure

The six-month closure of Boracay, the most popular destination in the Philippines for both domestic and foreign tourists, will impact the overall domestic market. However, the market should still be able to achieve growth in 2018.

The Philippines has strong economic growth, with GDP increasing by nearly 7% in both 2016 and 2017. The Philippines GDP is expected to grow another 7% in 2018. Demand for domestic air travel will continue to grow as the economy and middle class expand.

The 6% domestic growth recorded for 2016 and 2017 is relatively low, given that passenger traffic typically grows faster than GDP.

Manila slot restrictions are obviously a challenge. However, there is an opportunity for airlines to continue adding point-to-point routes and to squeeze out more capacity from precious Manila slots by upgauging.