The Philippines domestic market has seen a surge in domestic capacity in 2H2015, pressuring yields and profitability. More domestic capacity increases are likely in 2016, driven by the up-gauging of flights at Manila and new point to point flights from Cebu and other secondary cities.

The Philippines domestic market did not experience any growth in 2013 and 2014. Consolidation and a more rational approach to capacity led to a significant improvement in market conditions in the Philippines.

The recent capacity increases should be absorbable over time given the lack of growth in 2013 and 2014. But at least for the short to medium term there will be pressure on yields as competition intensifies between the three remaining domestic players.

This is Part 2 in a series of reports on the Philippines aviation market. The first report focused on the expansion of Philippine Airlines (PAL) in the international market.

This report looks at the domestic market, including expansion by the PAL Group and LCC competitors Cebu Pacific and Philippines AirAsia. The next report will examine rapid growth for Mactan-Cebu International Airport, which is benefitting from the domestic expansion as well as some new international services as congestion in Manila forces Philippine carriers to grow in secondary hubs.

Philippines domestic market had zero growth in 2013 and 2014

The Philippine domestic market doubled in size from 2007 to 2012 – with annual growth ranging from 10% to 25% – driven by rapid LCC expansion. But this growth proved to be unsustainable as it came at the expense of yields and an irrational approach to capacity.

Total annual domestic passenger traffic in the Philippines (in millions): 2004 to 2014 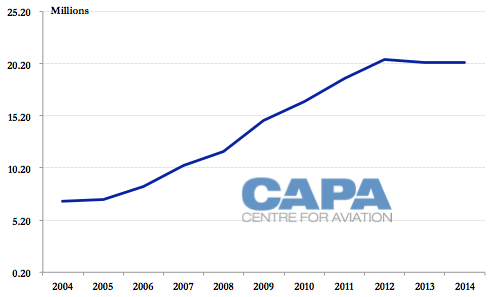 Philippines AirAsia and Zest recently consolidated their operations into a single operating certificate and brand.

Cebgo recently took over operations of the Cebu Pacific Group turboprop fleet, leaving the parent airline to focus on regional trunk routes with a fleet of A320 family aircraft and a handful of long haul routes with A330-300s.

The PAL Group also still has two operating certificates but there is no overlap as there were during the AirPhil era. PAL Express now operates most of the group’s domestic flights with the exception of a few trunk routes.

Domestic market expansion resumes in the Philippines in 2015

Meanwhile Cebu Pacific has continued to expand domestically in 2015. Its domestic expansion also continued in 2013 and 2014 although the total market did not grow as AirAsia and PAL contracted.

The Philippines CAB has not yet published any figures for 2H2015 but capacity growth has accelerated further in recent months. Cebu Pacific stated in its 3Q2015 analyst briefing that total domestic capacity was up 17% in 3Q2015.

Cebu Pacific domestic capacity was up by about 10% in 3Q2015 while its two competitors collectively expanded at a rate exceeding 25%. The rapid expansion by competitors pressured yields as Cebu Pacific's average domestic fares were down by more than 10%.

Cebu Pacific expects domestic capacity in the Philippines will also be up 17% year over year for 4Q2015. A similar increase is likely in 1Q2016 followed by smaller increases the rest of 2016 due to a higher base.

The capacity increase is alarming as it has come so quickly and as the Philippines is a highly price sensitive market.

Eventually the demand should again catch up with the supply as the Philippine economy has been growing steadily at a healthy rate of 6% to 7% per annum. 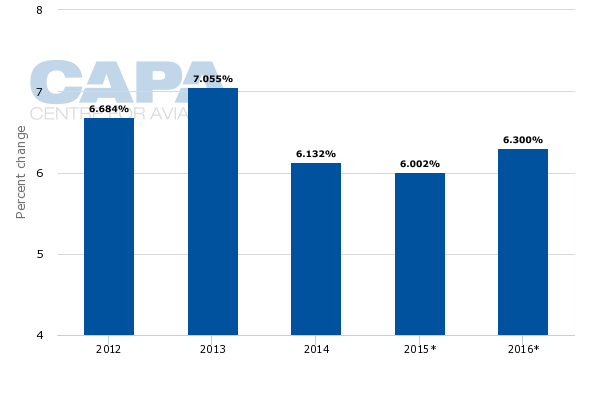 But rapid capacity increases cannot be absorbed overnight – even when factoring in that the Philippines did not have any growth in 2013 and 2014 while most other Southeast Asian markets suffered from overcapacity. Ultimately how quickly supply-demand balance returns to the Philippine domestic market depends on the pace of further capacity growth in 2016.

While it is unlikely there will be another wave of high double digit expansion, the capacity reductions from prior years will almost certainly not be repeated.

Cebu Pacific expansion has traditionally been steady but relatively conservative compared to most Southeast Asian LCCs. Modest domestic capacity growth is planned for the next couple of years generated by up-gauging trunk routes from Manila to higher gauge aircraft and the launch of new point to point routes as the turboprop fleet expands.

Philippines AirAsia (PAA) domestic expansion is more uncertain as it hinges on its ability to complete a turnaround. PAA’s business plan envisions three additional A320s per annum, which would be used to expand in both the domestic and international markets.

The AirAsia Group has not allocated PAA any of its 2016 deliveries but has said PAA could still potentially grow its fleet by sourcing aircraft through operating leases. In 2015 the airline has been able to add back capacity without growing its fleet by improving utilisation levels. There is limited opportunity to further improve utilisation and the decision to lease additional aircraft will likely only be made if PAA is able to improve its financial position.

PAA incurred an after tax loss of PHP1.357 billion (USD29 million) in 3Q2015, representing an improvement of 22% compared to 3Q2014. PAA reported a 10% reduction in average fares as domestic competition intensified. The AirAsia Group warned in its 3Q2015 results presentation that domestic demand on Manila to Cebu and Davao, the two largest routes within the Philippines, remains challenging.

The third quarter is typically the weakest in the Philippines. The surge in domestic capacity created an even more challenging environment as yields declined, essentially offsetting the reduction in fuel prices. PAL and Cebu Pacific both had large improvements in profitability in 1H2015, an indication that market conditions were much more favourable in the first half than the third quarter.

The PAL Group is planning further domestic capacity increases which could lead to a longer period of challenging market conditions. PAL is taking delivery of five A321s in 2016 while returning two A320s. A large portion of the capacity generated by the additional aircraft will be allocated to the domestic market – as was the case in 1H2015 as PAL added five A321s.

The PAL Group domestic strategy is to build up domestic capacity in phases. This is more manageable than the relatively sudden increases in capacity implemented in 2Q2015 and 3Q2015 but will still make it difficult for a return of more favourable domestic market conditions.

PAL is clearly keen to regain domestic market share after slipping from 42% in 2012 to 29% in 2014 despite the overall size of the market remaining flat.

Manila-Caticlan is currently served with 10 daily Dash 8 frequencies from PAL Express and eight daily ATR 72 frequencies from Cebgo, according to OAG data. The PAL Group and Cebu Pacific are planning to transition most of these flights in phases to A320s while PAA is planning to enter the market. As CAPA wrote in a Jul-2015 report:

Manila-Caticlan could easily see at least a doubling in capacity as AirAsia enters the market and the two incumbents up-gauge. Manila-Caticlan has the potential of becoming the third largest domestic route in the Philippines after Manila-Cebu and Manila-Davao.

Most of the additional capacity could be absorbed, particularly if Manila-Kalibo sees a large decrease. But Kalibo is unlikely to see a decrease that matches the increase at Caticlan. This will inevitably pressure yields at both Caticlan and Kalibo.

Yields at Caticlan are now among the highest in the Philippine domestic market. The airlines serving Caticlan can afford some reduction in yields as large gauge aircraft come with lower unit costs. But there is a risk that stiff competition will lead to a much larger reduction in yields compared to the expected reduction in costs, particularly when taking into account the cost of operating at the newly privatised airport.

Caticlan is the closest airport to the popular resort island of Boracay but currently can only handle turboprops. Kalibo is also a gateway to Boracay but is about 70km away and it takes about two hours to travel to Boracay from Kalibo Airport compared to a short ferry ride from Caticlan Airport.

Competition to further intensify on secondary routes from Cebu

PAL Express plans to move some its Manila-based turboprops to Cebu as flights to Caticlan are up-gauged. In 2016 Cebgo also plans to move one or two of its four Manila-based ATR 72s – most likely to Cebu. Cebgo currently has four of its eight aircraft based at Cebu and is also planning to allocate to the Cebu base the ninth and tenth aircraft which are being added to the fleet in 2016.

The planned regional expansion at Cebu will likely lead to further yield declines in the Cebu market, impacting profitability of the overall domestic sector. Cebu Pacific has already noticed larger yield declines on point to point routes from Cebu as PAL re-entered these markets compared to trunk routes from Manila.

While these markets had been relatively under-served, the markets are small and extremely price sensitive. The capacity added by PAL Express, which has been serving the new point to point routes with single class A320s, was significant as in some markets it resulted in an over 50% increase in total capacity.

Secondary point to point routes will likely continue to see significant increases in capacity over the next couple of years as Cebu Pacific has committed to increasing its turboprop fleet from eight ATR 72-500s to 16 ATR 72-600s. The first two ATR 72-600s that were ordered in Jun-2015 are slated to be delivered in 2H2016 and will be growth aircraft.

Overall the long term outlook for the Philippines domestic market is relatively bright. There are huge opportunities to open new point to point routes.

Demand for such routes is growing as the economy expands and a larger portion of the population is able to opt for short flights instead of ferries - particularly as low fares stimulate demand. Such routes also enable Philippine carriers to fly fewer domestic passengers via Manila, where slots are at a premium and should be used where possible to cater to the local Manila market.

The consolidation from recent years also has whittled down the playing field to only three groups, with one of the competitors relatively insignificant and only competing on trunk routes. This has created a relatively rational environment in the Philippines compared to most other major Southeast Asian domestic markets.

There is always the prospect of the remaining competitors waging irrational market share battles but such battles are likely to be short lived as the incumbents stabilise the market, producing a healthy supply/demand balance.