The pandemic is causing some strange statistical deviances at airports across the world. In Europe it is manifested by Paris’ Charles de Gaulle airport climbing above London’s Heathrow airport to claim the #1 spot by passenger numbers in the first nine months of 2020.

In fact, CDG was already catching LHR, and would probably have overtaken it during the next couple of years anyway.

Whether that remains the case at the end of the year is yet to be revealed, and will be determined by the various permutations of travel bans, quarantines and lockdowns imposed by the two countries and others, and in what order.

Right now, that is all they have to offer to deal with the pandemic, despite the clarion calls from the industry for a change of strategy.

Surprising results across the world

This peculiar situation throws up some statistical surprises, such as the world’s busiest airport currently is in China but is not Beijing or Shanghai.

In Europe some regional airports are hosting as many (or few) flights as capital city airports. And in Mexico it is Cancún Airport, a vacation airport, ranked first in international passengers transported in Sep-2020, ahead of Mexico City Juarez International Airport, which was previously the busiest airport in Latin America.

Perhaps not so much of a surprise is the news that Paris Charles de Gaulle (CDG) has overtaken Heathrow as Europe’s largest airport, according to the latest passenger figures from the London airport.

CDG was growing more quickly in the previous two years

Heathrow continues to operate off two runways and it is anyone’s guess when that will change now. Five years of investigations and subsequent deliberations by an ‘Airports Commission’ and ensuing debates in the UK parliament have been rendered almost pointless by a virus which has put back aviation development by another five years at least.

There is no such problem at Paris, where CDG has four runways. 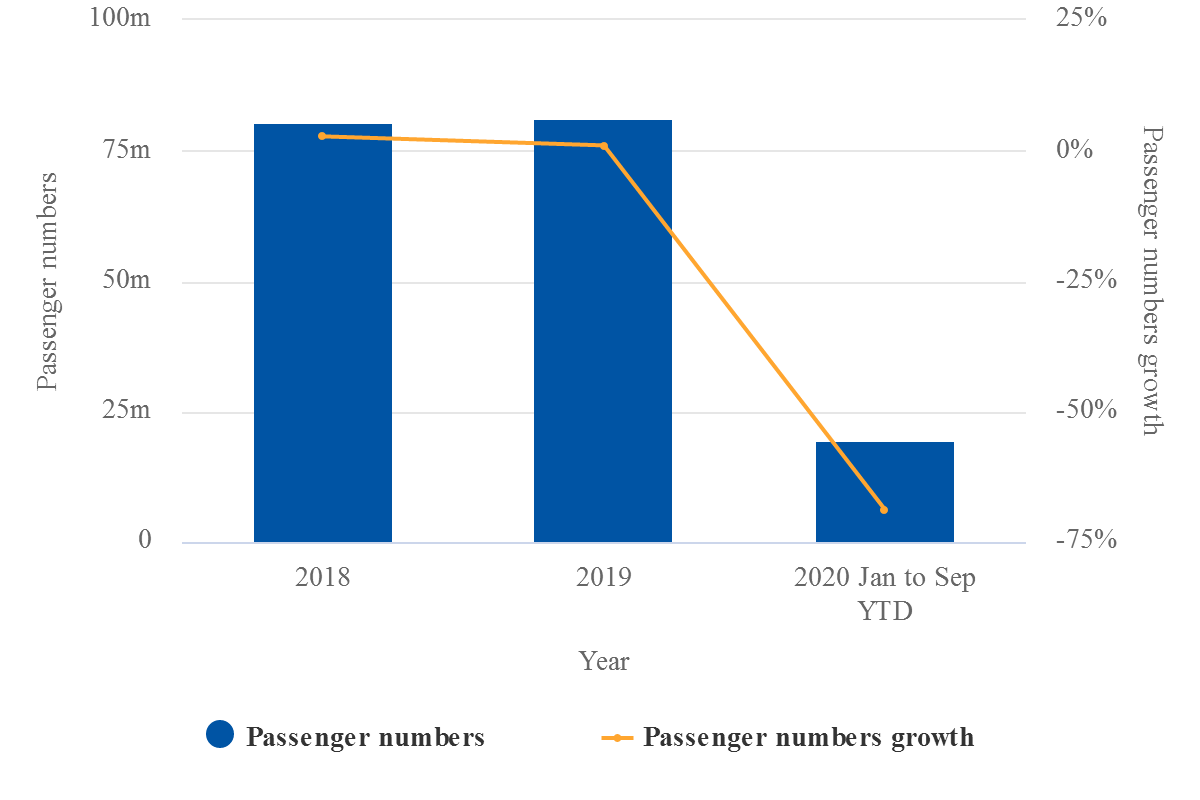 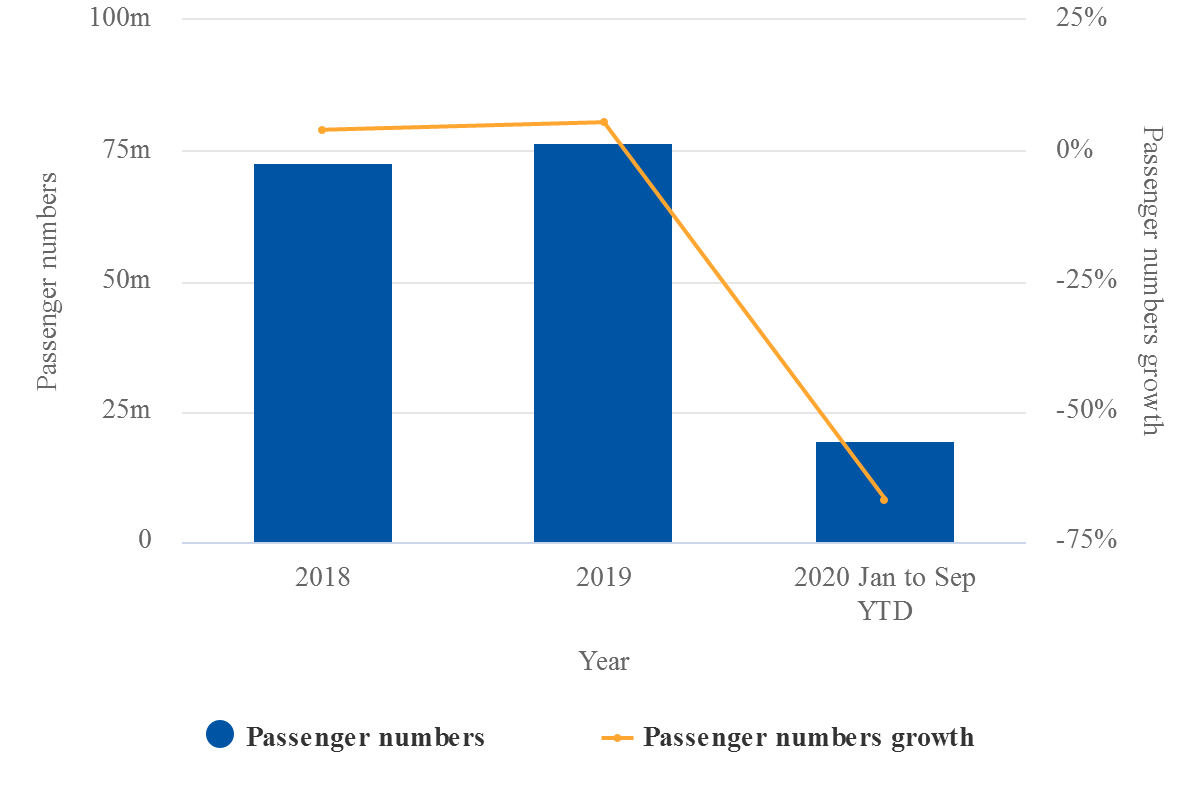 Looking at the monthly traffic data, there is a suspicion that this result could be temporary.

At CDG there was a quicker bounce-back as lockdown restrictions, which had been imposed two weeks earlier in France than in the UK, were lifted. Indeed, there were 700,000 more passengers at CDG than at LHR in Aug-2020, a month which is more of a vacation one in France than the UK.

But then, as the virus ‘second wave’ arrived quicker in France than in the UK, there were only 100,000 more passengers at CDG over LHR in Sep-2020.

Now the UK enters a second national lockdown for (initially) four weeks from 05-Nov-2020, following a period when tough quarantine requirements have been in place, with effectively a ban on both inbound and outbound leisure travel and any sort of domestic travel. Such a draconian situation has not yet been achieved in France, where several cities are locked down but not the entire country.

At least for now. 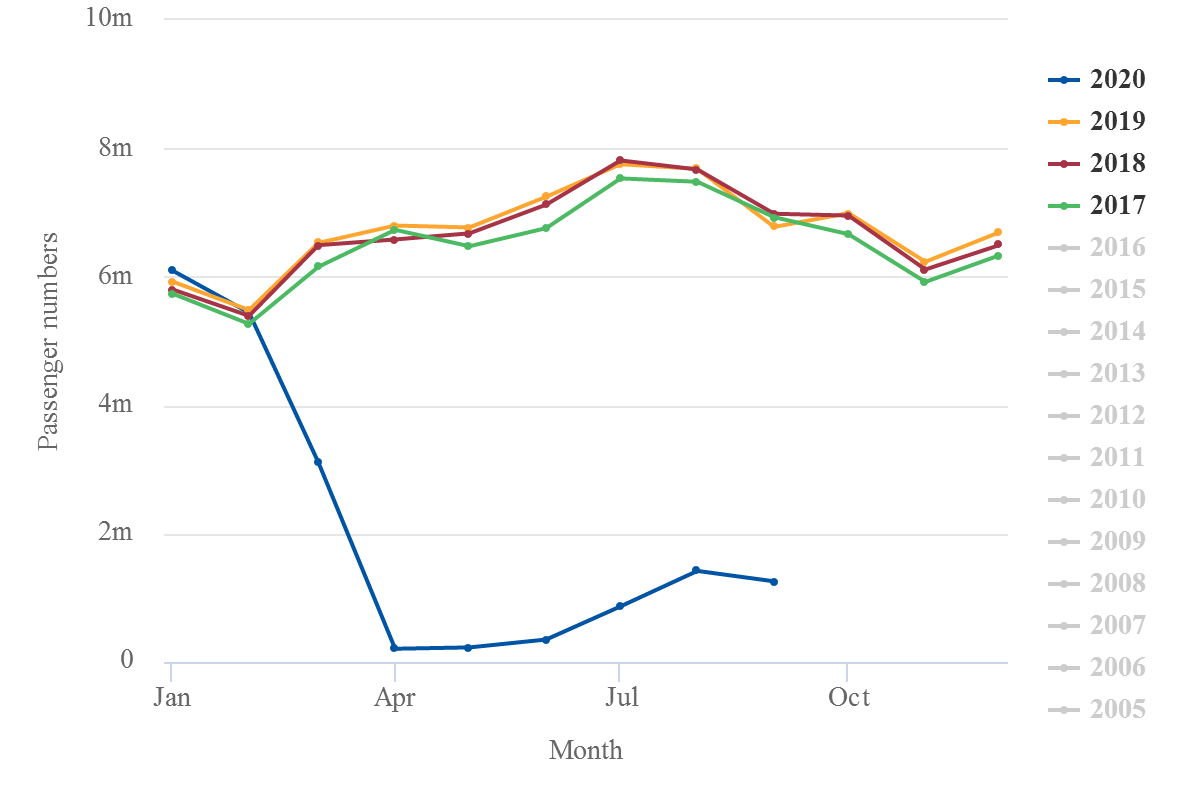 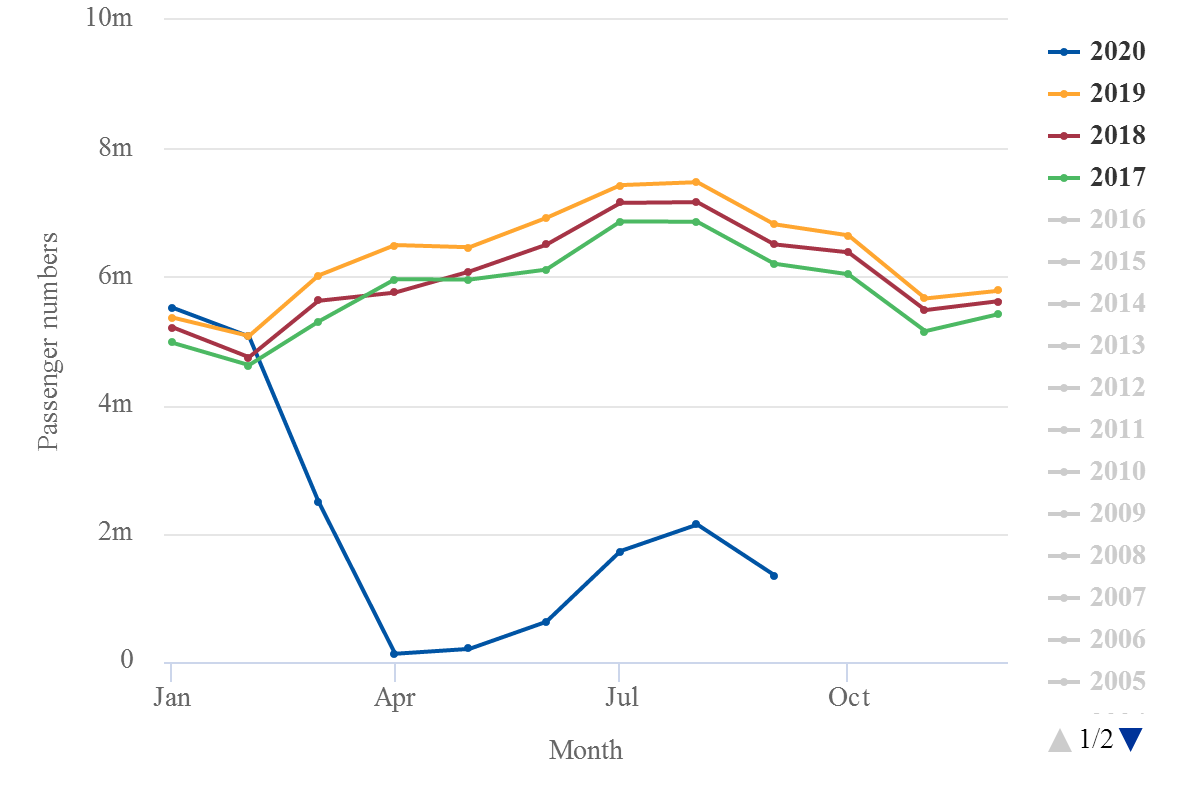 Some clue may be ascertained from statistics on flight departures in the seven days following the writing of this report (03-Nov-2020).

North American services important to both airports, but especially Heathrow

That statistic underlines the importance of North American services to Heathrow and the fact that they have been maintained despite the impact of travel bans on both sides of the Atlantic. They will be further influenced by the UK lockdown from 05-Nov-2020 and by the U.S. Presidential election, depending on the result.

A Biden (Democrat) victory could lead to a huge lockdown across the country, which even though it is managed state by state has mainly Democrat-held cities to toe the line if that happened.

A Trump (Republican) victory could lead to the loosening of regulations in tandem with promotion of a vaccine and improved therapeutic drugs. If North American services are further impacted, LHR will fall further behind CDG, where U.S. services have less significance.

Both airports have been able to retain the global basis of their route networks, although with much reduced frequencies and capacity. North American services still operate to designated cities from both airports for now.

Heathrow has a stronger network to the east (Asia Pacific), whereas CDG has a stronger one to Africa, where the virus has been contained better than in other areas (or never took hold).

Looking in more detail at the respective network summaries for the week commencing 02-Nov-2020, it can be observed that CDG has 20 more passenger destinations than LHR, the main difference being in Africa, where CDG scores well, with 31 more destinations.

Heathrow’s main strength is in Asia Pacific (+15). In Europe they are comparable, while LHR has 5.6 percentage points less domestic seat capacity than does CDG.

Air France in a stronger position than British Airways

One interesting statistic is that CDG has been able to retain services by its national carrier more effectively than LHR has done. In the week commencing 02-Nov-2020 British Airways accounted for half of all seat capacity, whereas at CDG Air France’s share was 62.8%.

However, in Heathrow’s case there is a second major UK airline in Virgin Atlantic, where the focus is now on that airport rather than on London Gatwick. That is not the case at CDG. 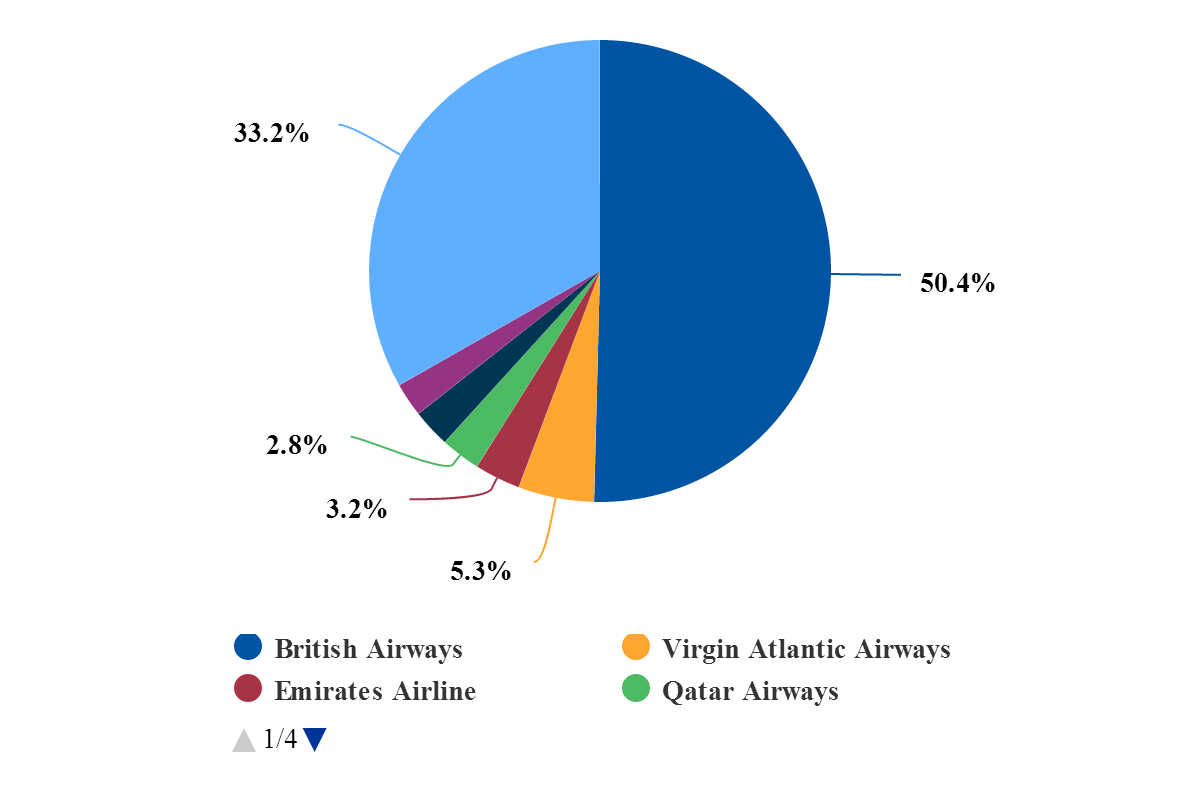 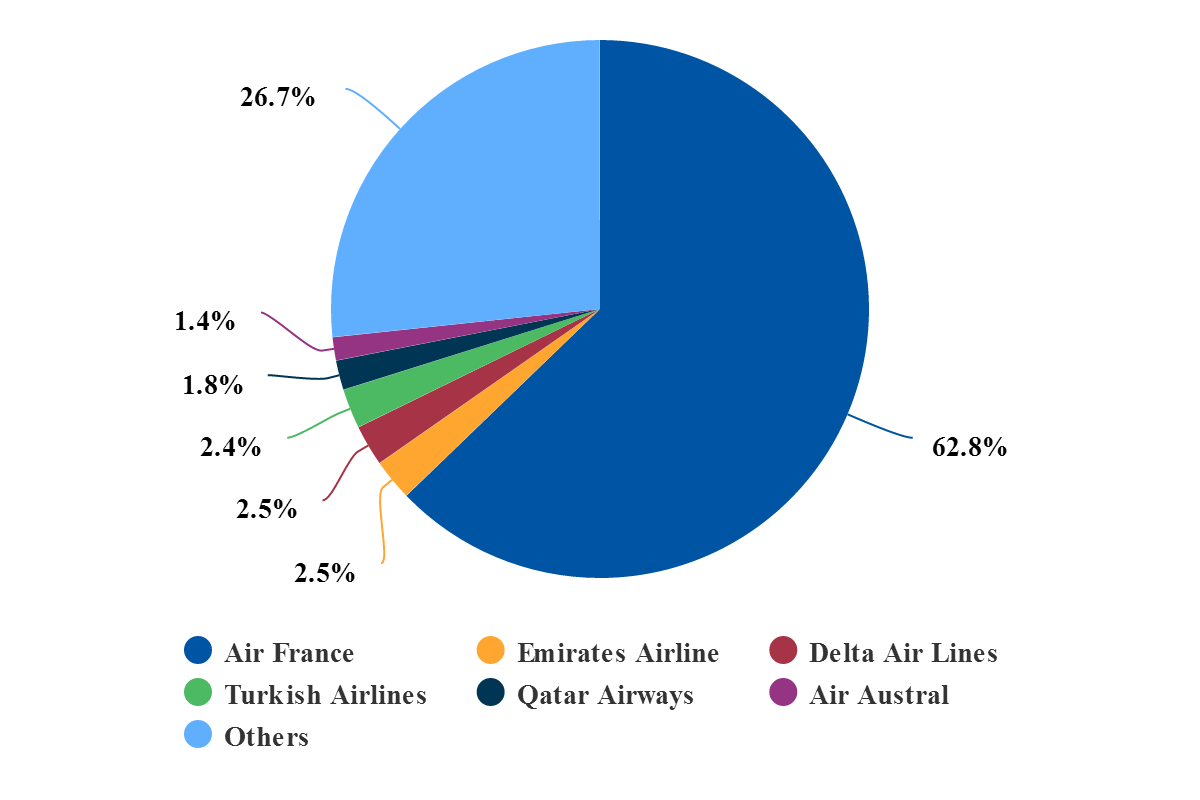 LCCs not filling any gaps yet; alliances still have power at both airports

It was anticipated that there would be a change in the distribution of seats by business model at major gateway/hubs like these two airports, with the emergence of more LCC capacity if and when slots became available (so far they remain protected), but that does not appear to have been the case so far. At Heathrow full service carriers still account for almost 99% of capacity, and at CDG it is 94.6%.

There has not been a major change in the presence of the alliances either. Unaligned airlines still account for only 18% of capacity at Heathrow and 13.5% at Charles de Gaulle. That small gap in favour of CDG could be telling, moving forward.

Elsewhere in Europe, Istanbul is the big winner

Where does this leave the other major airports in Europe? In the historical ‘pecking order’ Amsterdam, Frankfurt, Madrid and Barcelona were next in the passenger table.

There has been little movement overall, mainly on account of that average passenger reduction of two thirds (66.8%). The main changes – apart from CDG leapfrogging LHR – are with Istanbul’s new airport, which has gained four places so far in 2020 on account of a low passenger loss (-48.7%), and Moscow Sheremetyevo, which is plus two placed for the same reason.

The two Spanish airports have been hit hard by lockdowns and the resurgence of the virus, and both fell by two places.

A further CAPA report will follow on variations at the leading regional airports in Europe.