The rebound in domestic travel in Japan has been one of the most impressive in the Asia-Pacific region. However, a resurgence of COVID-19 cases in the country is threatening to put the brakes on the pace of recovery.

Japanese domestic capacity has bounced back quickly towards normal pre-COVID levels. Although domestic travel was not shut down to the same degree as in other countries, it was still cut back dramatically by government movement restrictions.

The turning point for the Japan market was when the government removed the country’s state of emergency and eased domestic travel restrictions on 19-Jun-2020. This spurred carriers to begin ramping up services again.

But now a second wave of infections – particularly in the key Tokyo market – is causing concerns. The timing is far from ideal, as airlines are looking for Aug-2020 holiday periods to boost demand further. The airlines have decided to ease back on their capacity growth plans for Aug-2020 as bookings dip.

The government has been taking steps to try to keep the domestic travel momentum going with a massive travel promotion, but it has also been forced to dial this effort back somewhat.

The chart below shows the steady climb in seat capacity for Japan Airlines, ramping up faster since the domestic travel restrictions were removed in Jun-2020. 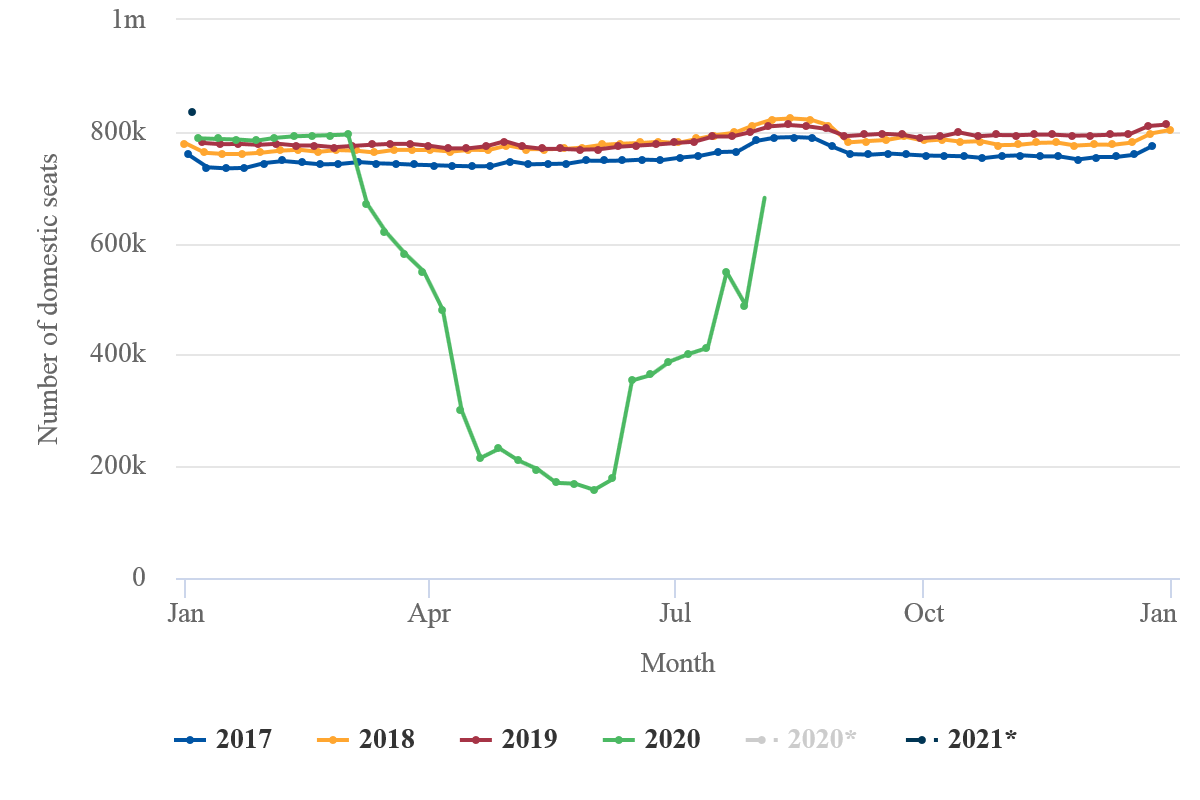 Demand has also climbed, although not at the same rate as capacity. Domestic demand is predicted to increase to 50% of normal levels in the second half of Jul-2020, and up to 70% in Aug-2020.

However, in late Jul-2020 JAL cut its capacity estimates slightly for early Aug-2020 due to the new wave of COVID cases in Japan, which is affecting bookings. This has caused it to pull back its plan for 1-Aug-2020 to 17-Aug-2020 to 83% of its normal schedule. It had previously aimed to be operating 90%-93% of its schedule during this period.

So far the airline has not adjusted its capacity targets for late Aug-2020 and is still planning to end the month with 90%. However, this could change in subsequent updates, depending on how sustained the latest outbreak is.

Like JAL, ANA has scaled back its Aug-2020 plans

All Nippon Airways estimated that it would be operating just over half its domestic flights by the end of Jul-2020, and expected this to increase to 88% in Aug-2020. However, ANA has also trimmed its projections recently, and now plans to operate an average of 77% of its pre-COVID schedule in Aug-2020. The rate will vary widely through the month – from 71% in the first week up to 88% in the middle of the month during the holiday period.

Also in the ANA Group is the LCC subsidiary Peach. The LCC restored its domestic capacity even faster than the parent airline, and resumed its full domestic network schedule by late Jul-2020. Peach had even predicted it would increase flight numbers beyond previously planned levels for the Aug-2020 holiday period.

But like the full service airlines, the LCC has had to scale back its ambitions and cancel more flights, thanks to the uptick in coronavirus cases.

Domestic network is now the star of the show

International services remain in the doldrums and are returning very slowly. Airlines will have very little international feed to their domestic networks for some time, so they will have to rely on Japanese local travel for the immediate future.

This represents something of a reversal in the importance of the domestic and international markets in Japan.

A relatively flat population growth and the spread of the high-speed rail network has meant that Japanese airlines have kept growth low in their domestic networks in recent years, instead focusing on international markets for traffic and network expansion opportunities. Now, however, the airlines are heavily reliant on their domestic divisions. 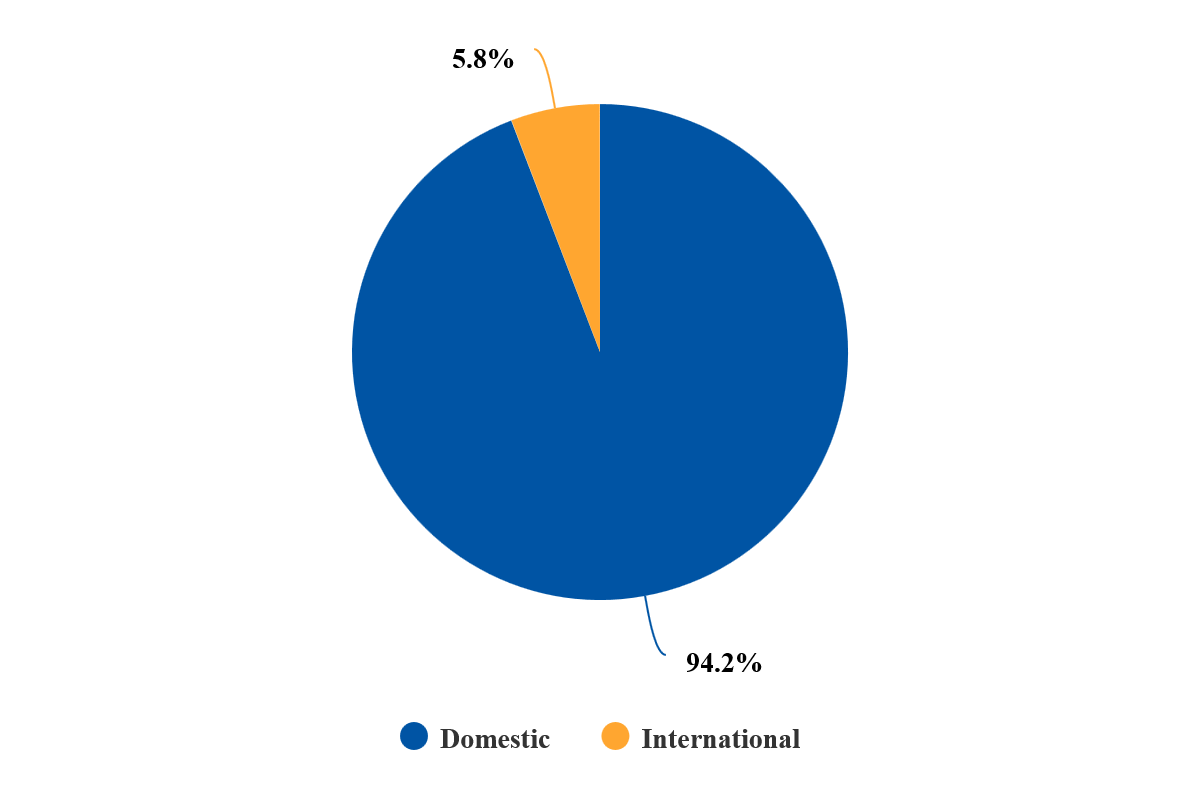 The Japanese government is looking to stimulate demand further to provide a boost for the local travel industry and encourage domestic tourism. A campaign called 'Go To Travel' was launched on 22-Jul-2020, subsidising up to half of domestic trip costs within certain limits.

The launch of this massive JPY1.35 trillion (USD12.8 billion) programme has been complicated by the recent spike in COVID-19 cases – particularly in Tokyo. The government has faced criticism from some quarters about whether it should be promoting internal travel while a second-wave risk exists.

Because of these concerns, the government has modified the plan by excluding the Tokyo market for now.

International travel is returning much more slowly than domestic, due to border and quarantine restrictions imposed in Japan and in other countries the Japanese airlines fly to.

The rate of international flights is very similar for ANA. It plans to operate 9% of its international services in Jul-2020 and 11% in Aug-2020. Flights will resume on four more routes, with frequency increases on others.

However, any meaningful recovery in international capacity remains a very distant prospect. 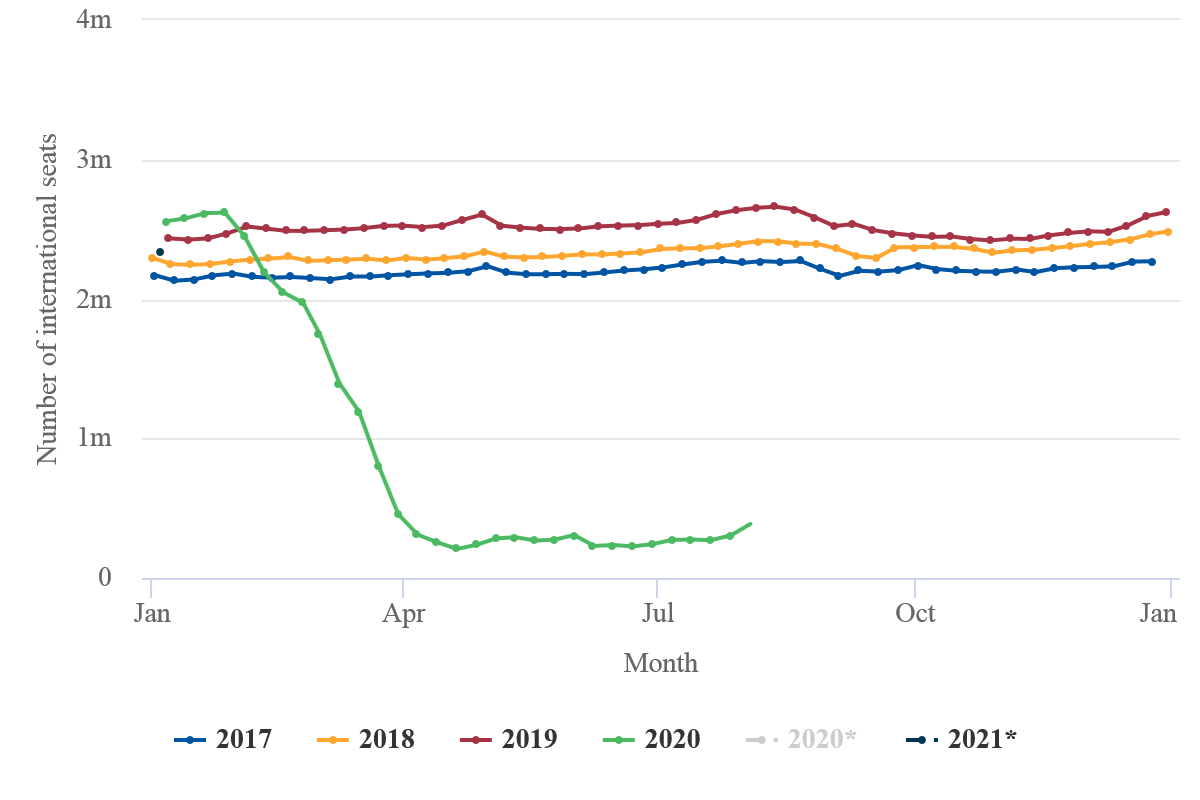 As with other Asian markets, recovery will be uneven

The situation in Japan shows that even when domestic capacity is close to normal levels again, the pace of recovery cannot be taken for granted. Demand improvement will be uneven while COVID-19 is around, and temporary reversals should be expected. This is becoming a common refrain.

Governments must tread a fine line – boosting domestic travel helps the airline and tourism industries as well as the broader economy, but it also carries a risk of helping the coronavirus spread when the inevitable flare-ups occur. Officials will want to wait as long as possible before closing off any regions.

However, the last thing the government – or airlines – would want to see is a return to a nationwide state of emergency.