Panama-based Copa continues to outperform nearly every airline group in the world, recording an operating profit margin of 17.9% for 2012 as profits increased by 5% to USD327 million. Copa has been consistently highly profitable since its 2005 initial public offering, with annual operating margins every year of at least 17%. During this period the average operating profit margin in the global airline industry has been in the zero to 4% range.

Copa, which has more than tripled its annual RPKs since 2005, expects more double-digit growth and industry leading profitability in 2013. Panama has the fastest growing economy in Latin America and the region overall continues to have healthy GDP growth, fuelling demand for travel within the region. Copa is well positioned to cash in on the continued rapid growth in international travel within Latin America as Panama City is the largest intra-Latin America hub and, unlike most other airports in the region, is committed to expanding the infrastructure to keep up with Copa’s rapid growth trajectory.

Copa reports another year of healthy profits for 2012

Copa in 2012 saw a slight reduction in its margin compared to 2010 and 2011, when it recorded operating profit margins exceeding 20%. But the airline group continues to be able to grow profitably on the back of rapid growth in intra-Latin America traffic and keep intact its record of operating margins above the 17% mark.

Copa revenues grew 23% to USD2.25 billion in 2012 as costs increased by 28% to USD1.85 billion, resulting in an operating profit of USD403 million. Revenues have more than quintupled since 2004, when Copa generated only USD400 million in revenues.

The carrier grew RPKs by 23% in 2012, nearly matching a 24% growth in capacity. Copa’s 75.4% average load factor is much lower than its US peers. But the group is more focused on maintaining yields and its unusually low break-even load factor of 61%. 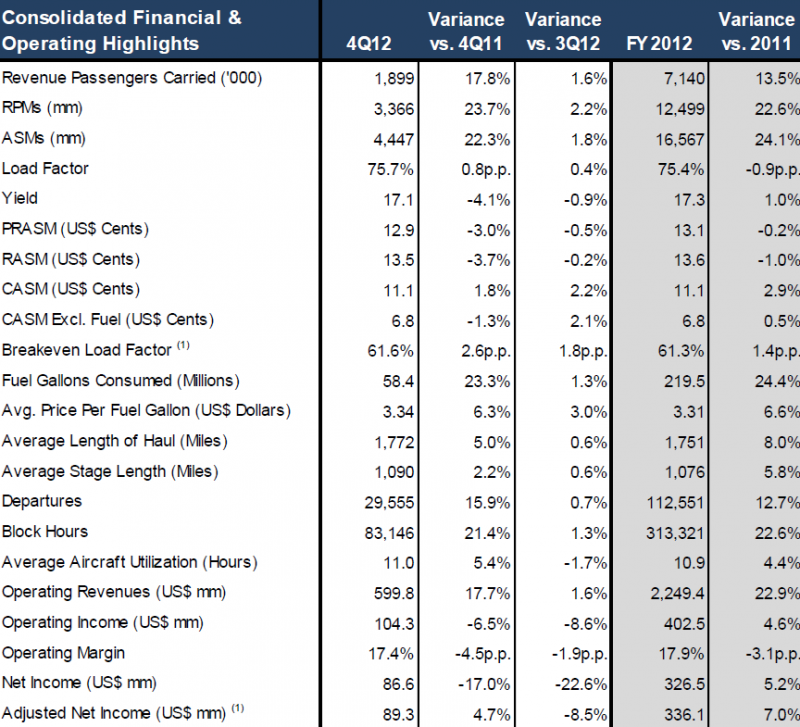 Copa clearly benefits from relatively limited competition in the intra-Latin America market, where it is able to offer more city pairs and generally shorter transit times than the region’s other airline groups. It also benefits from virtually no competition from low-cost carriers as nearly all LCC capacity in Latin America is allocated to domestic markets while Copa allocates over 90% of its capacity to the international market. Panama City is served by only one LCC with three weekly flights to a destination Copa does not serve.

Copa currently accounts for about 84% of seat capacity at Panama City, according to Innovata data. But it is Copa’s approximately 25% share of international capacity within Latin America and the Caribbean that is most important as Panama itself is a small albeit rapidly growing market with a population of less than four million.

Its strong position in a growth market has allowed Copa to increase fares and pass on the higher price of fuel to passengers when necessary to maintain profit margins. Copa has consistently been able to avoid any significant impact to its bottom line when fuel prices rise because most of the markets it serves benefit economically from higher commodity prices, resulting in higher demand that is sufficient to absorb increases in fares and fuel surcharges.

Copa’s outlook for 2013 is again bright

Copa CEO Pedro Heilbron is confident the additional capacity will be absorbed given the continued positive economic indicators from Panama and the broader Latin America region. “Economic prospects for the region continue to be favourable,” he told analysts during a discussion of the group’s 4Q2012 results.

Mr Heilbron added that Panama’s economy grew by an estimated 10% to 11% in 2012 and is expected to grow by a further 8% in 2013. Latin America’s overall GDP is expected to grow by almost 4% in 2013. “This should have a positive impact on the demand for our services, as we continue to expand and strengthen even more our network dominance for intra-Latin America travel,” he said.

Unlike in 2011 and 2012, when Copa added 14 new destinations, Mr Heilbron said Copa will focus in 2013 on expanding capacity to existing markets. So far Copa has unveiled plans to add only one new destination in 2013, Boston, although a couple more destinations are under consideration.

Boston, Copa’s eighth destination in the US and its 65th overall, will be served daily from 10-Jul-2013.  Mr Heilbron says he is “very optimistic” about the prospects of the Panama City-Boston route as the city is not currently well linked with Latin America. Copa will be the only Latin American carrier serving Boston, which has traditionally been only a gateway for services to Europe, the Caribbean and Canada until Japan Airlines became the airport’s first Asian carrier in 2012.

Copa has also already unveiled plans to increase capacity in 1H2013 to Orlando in Florida, Punta Cana in the Dominican Republic and Port of Spain in Trinidad. Orlando and Punta Cana will receive their fourth daily frequency while Port of Spain will be upgraded from seven to 12 weekly frequencies.

Copa in recent years has been steadily adding frequencies in its existing markets as it adds banks of connecting flights at Panama City. The additional frequencies lead to more city pairs and reduced transit times, allowing Copa to further increase the advantage it has in the intra-Latin America market.

Panama City-Bogota is Copa’s second largest route and connects its main hub with the smaller hub of subsidiary Copa Colombia. Bogota-Panama City is currently served with 92 weekly return frequencies. Only Panama City-San Jose (Costa Rica) is bigger, with 98 weekly frequencies. Cancun is one of four markets now served with five daily flights – the others being Lima in Peru, Medellin in Colombia and Santo Domingo in the Dominican Republic. 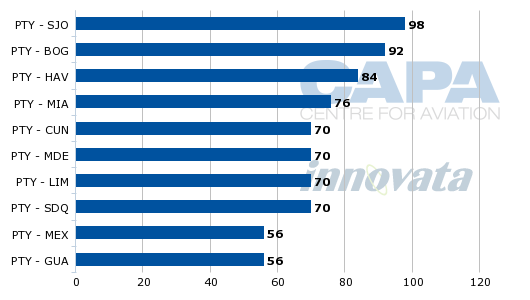 Copa also has been expanding capacity by up-gauging frequencies. Copa in recent years has only been taking 737-800s, which it sees as the ideal aircraft given the maturation of most of its routes. Copa currently has an all-narrowbody fleet consisting of 57 737NGs and 26 Embraer E190s.

As new 160-seat 737-800s come in Copa has been returning some of its smaller 124-seat 737-700s while not changing the size of its fleet of 94-seat E190s. Copa still sees a need for -700s on some of its longest routes that the -800 cannot operate without payload restrictions and the E190 for thin regional routes. The re-engined 737 MAX would open up the possibility of bigger aircraft on its longer routes. But Copa, which operates some of the longest 737 routes in the world, has not yet ordered the 737 MAX or A320neo. 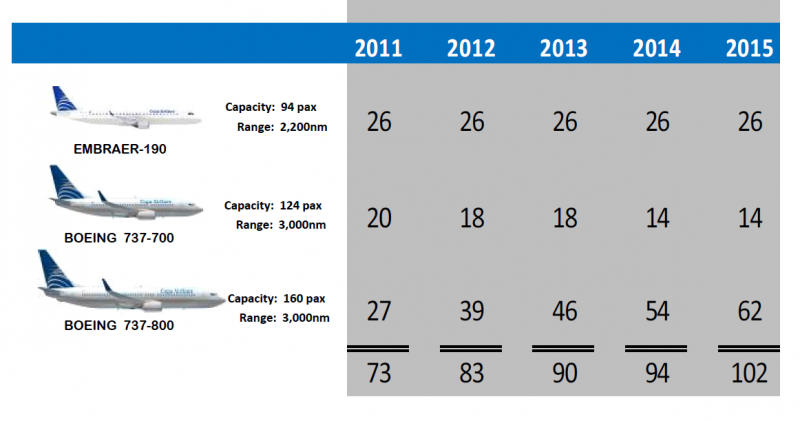 Only two years ago Copa’s network consisted of 50 destinations. Copa has launched services to 14 destinations since Jun-2011, including nine in 2011 and another five in 2012. Mr Heilbron stated that Copa plans to focus on spooling up and improving the contribution to these 14 destinations before resuming rapid network expansion.

The 14 new destinations have included an even mix of North America (Chicago, Las Vegas, Toronto), the Caribbean (Curaçao, Nassau and Montego Bay), Central America (Liberia in Costa Rica and Monterrey in Mexico) and South America (Asunción in Paraguay, Cúcuta in Colombia, Iquitos in Peru and Brasilia, Porto Alegre and Recife in Brazil).

Copa tries to maintain a well-balanced network as an overwhelming majority of its traffic consists of transit passengers. With the addition of Boston, Copa’s network will include 31 destinations to the south in South America and 33 to the north, spread across North America (9), Central America/Mexico (11 excluding Panama) and the Caribbean (13). All but two of its 64 destinations are linked to Panama City, with the other two only served with domestic flights from Bogota.

Copa Airlines network: as of Feb-2013 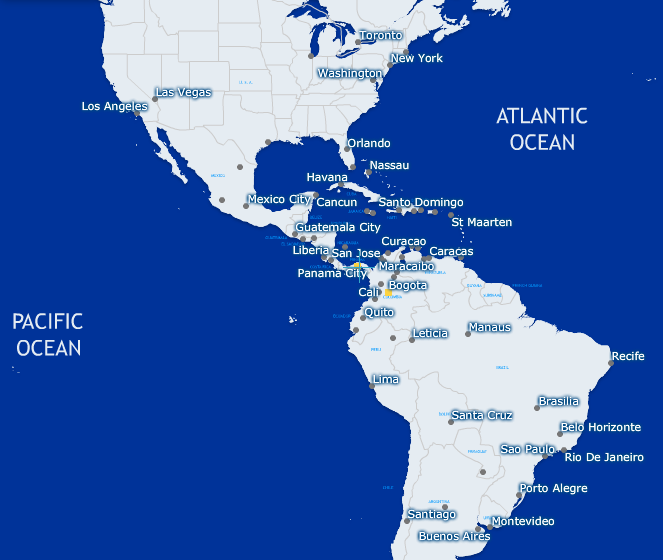 Unlike larger Latin American airline groups, Copa is focused almost entirely on international traffic within the Americas. Copa is in one domestic market, Colombia, where it has been steadily reducing capacity in recent years to avoid competition from Avianca and LAN Colombia.

Copa is the second largest international carrier in Colombia, accounting for 17% of international traffic through the first 11 months of 2011. Mr Heilbron said Copa foresaw a challenging domestic market and reacted by focusing more on increasing capacity from Colombia to its Panama hub. Copa currently links nine cities in Colombia with Panama City and also operates some niche point-to-point international routes from Bogota. Over 90% of Copa’s international seat capacity is currently allocated to Panama City.

Unlike LATAM and Avianca-TACA, Copa does not operate long-haul services to Europe. But by focusing entirely on the intra-Latin America market its exposure to weaker economies abroad is limited and its all-narrowbody fleet allows for a lower cost structure. Copa’s strong relationship with United and its membership in Star Alliance, which it formally joined in Jun-2012, allows it to offer a virtual global network without worrying about the economic downturn in Europe.

See related article: Avianca-TACA and Copa put Star on top in Latin America but victory will be short-lived

The intra-Latin America market consists of hundreds of small but fast-growing city pairs which cannot easily support non-stop service, giving Copa an advantage given the strength of its network. Such market dynamics means few airlines will be able to match Copa’s network and make it difficult for LCC penetration as low-cost carriers typically operate on point-to-point rather than network models.

Copa also has a huge advantage in that Panama recognises the value of aviation to its economy and continues to invest in airport expansion. Tocumen Airport opened a new concourse in 1H2012, providing 12 additional gates for a total of 34. The airport has already started planning further terminal expansion, with work expected to begin in 2013. Mr Heilbron said the new project, which includes 20 additional gates, should be completed within four years.

Tocumen has more air bridges than other Latin American hubs, a status it seeks to maintain. With other leading Latin American airports such as Bogota well behind the growth curve, Panama along with its hometown carrier is poised to maintain its current infrastructure advantage.

After recording several consecutive years of profitable growth, Copa is not about to slow down. Market conditions continue to be in its favour. There is little reason to believe it cannot maintain its record of remarkable accomplishments in an otherwise challenging industry. 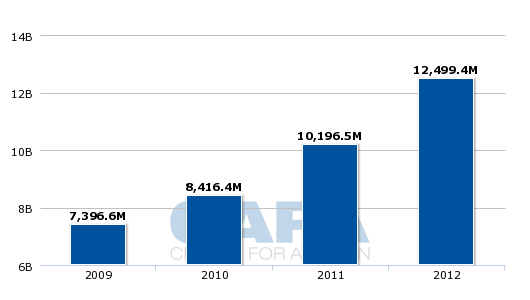 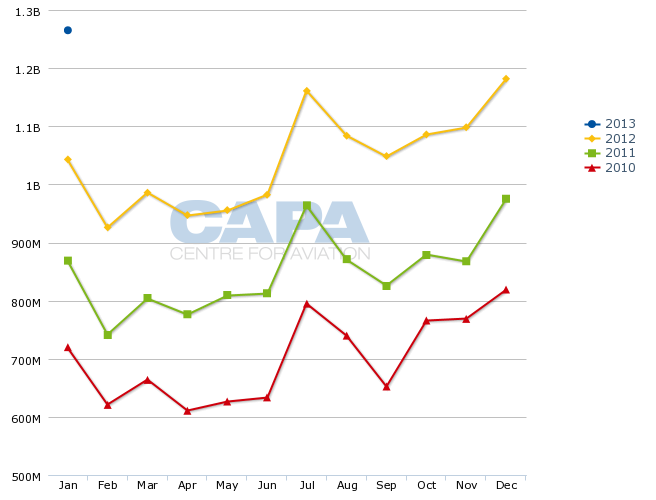