Asia Pacific airlines reported continued expansion in international passenger demand in Jun-2011, although international air freight markets softened further during the month, according to data released by the Association of Asia Pacific Airlines (AAPA). The outlook for the second half of 2011 remains “reasonably positive” AAPA noted, with premium demand remaining strong on many business routes and Japan traffic starting to recovery. AAPA however cautioned over the uncertainty related to the strength of the global economic recovery and oil price volatility.

During Jun-2011, airlines based in the Asia Pacific region carried a total of 15.5 million international passengers, a 4.4% year-on-year increase. Passenger numbers have increased in all but one (Feb-2011) month of 2011 and in every month of 2010. 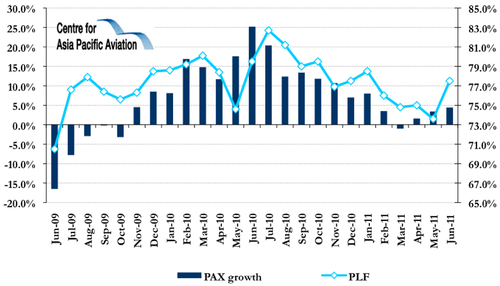 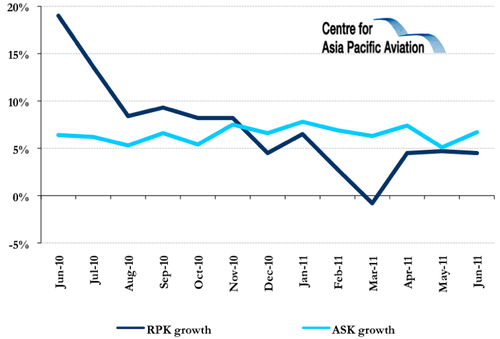 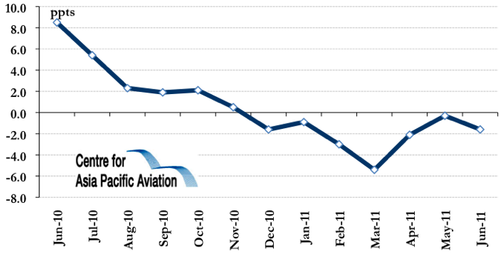 This scenario is noted limited to Asia Pacific airlines. IATA earlier this month noted that load factors are now down on their 2010 peaks, and with demand-supply conditions weakening, prospects for significant further yield increases are waning. Meanwhile, yield-boosting fuel surcharges are being held rather than increased (and in some cases reduced) while increasing capacity may reduce scope for underlying fare rises if passenger load factors fall as a result. IATA’s own forecast is for a 3% increase in passenger yields over the course of 2011 – half the rise seen in 2010.

International air cargo demand (FTKs) declined 6.0% year-on-year, a reflection of the strong recovery in 2010, and some recent moderation in demand for Asian exports. Offered freight capacity declined by 1.5%, leading to a 3.1 ppt decline in the average international freight load factor to 67.3%. 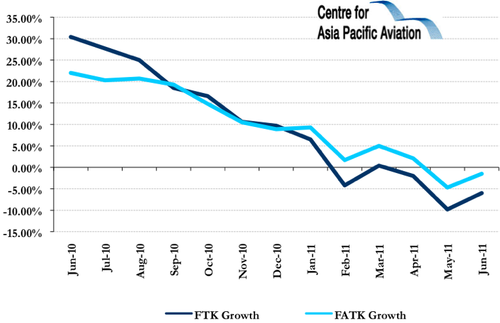 During 1H2011, Asia Pacific airlines carried 92 million international passengers, a 3.1% year-on-year increase. However, capacity growth of 6.8% outpaced the 3.7% increase in traffic, resulting in a 2.3 ppt load factor decline to 75.8%. At the same time, international air cargo demand during the first half of the year was relatively soft, declining by 3.2% compared to last year’s post-recession restocking surge. 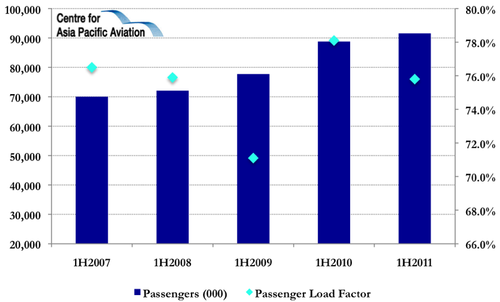 Outlook for second half remains ‘reasonably positive’ despite challenges

Looking forward, Mr Herdman continued noted that despite the demand-capacity inbalance, the outlook for the second half of the year “still remains reasonably positive, given the normal seasonal pattern of stronger demand for both passengers and cargo”.