Across the US small secondary and tertiary level airports are debating how best to attract airlines back and to gain new users.

One of them is Sanford Airport. Publicly owned but privately managed under concession, after Orlando International the airport acts as the alternative gateway to the Orlando region – probably the premier tourism region in the world.

Sanford has had its fair share of foreign airline users in the past, including trans Atlantic services, but presently it is limited to LCCs – and specifically one ULCC.

While LCCs are helping what recovery there is to a greater degree than full service carriers, the Sanford management needs to attract those foreign carriers again.

The infrastructure is in place to handle them, and the plan of attack seems to be to offer the lowest charges in the area to use that infrastructure.

Orlando, Florida, USA is one of the world's premier travel destinations, with approximately 70 million visitors a year visiting its various attractions in a ‘normal’ year.

The times are anything but normal now, and the region's tourist industry has been hit hard by the pandemic, with the prolonged closure or reduced accessibility of attractions, and hotels consistently losing business.

Although there is alternative employment in the area – for example, Orlando figures highly in the CIT industries – it is evidently heavily dependent on tourism.

Florida is a state that has imposed less onerous conditions on residents and visitors than most.

COVID-19 infection rates were very high but have eased off considerably in the past month or so. At the end of Oct-2021 Orange County, which includes many but not all of the Orlando area attractions, lifted its local state of emergency as the 14-day ‘positivity average’ for the county fell to 3.51%, after trending downward since August. 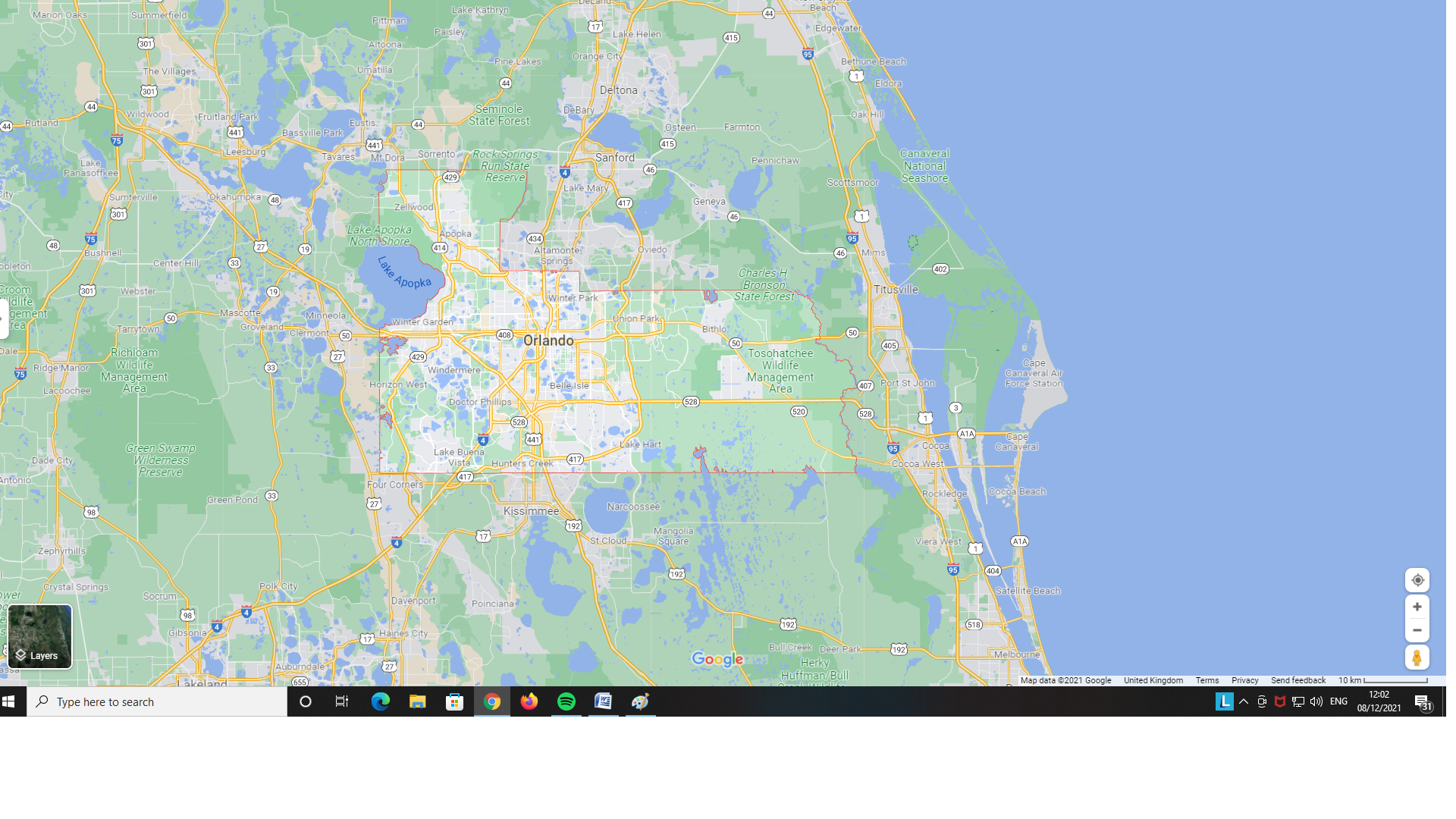 Infection rates reduce and restrictions eased in time for Christmas

As a result of the downward trend (to zero cases on 07-Dec-2021), vaccination percentages and the lifting of Orange County's local state of emergency, effective 01-Nov-2021 fully vaccinated employees and visitors to City of Orlando facilities are no longer required to wear a face covering – absent any special circumstances – while those who are not fully vaccinated are encouraged to wear a face covering. 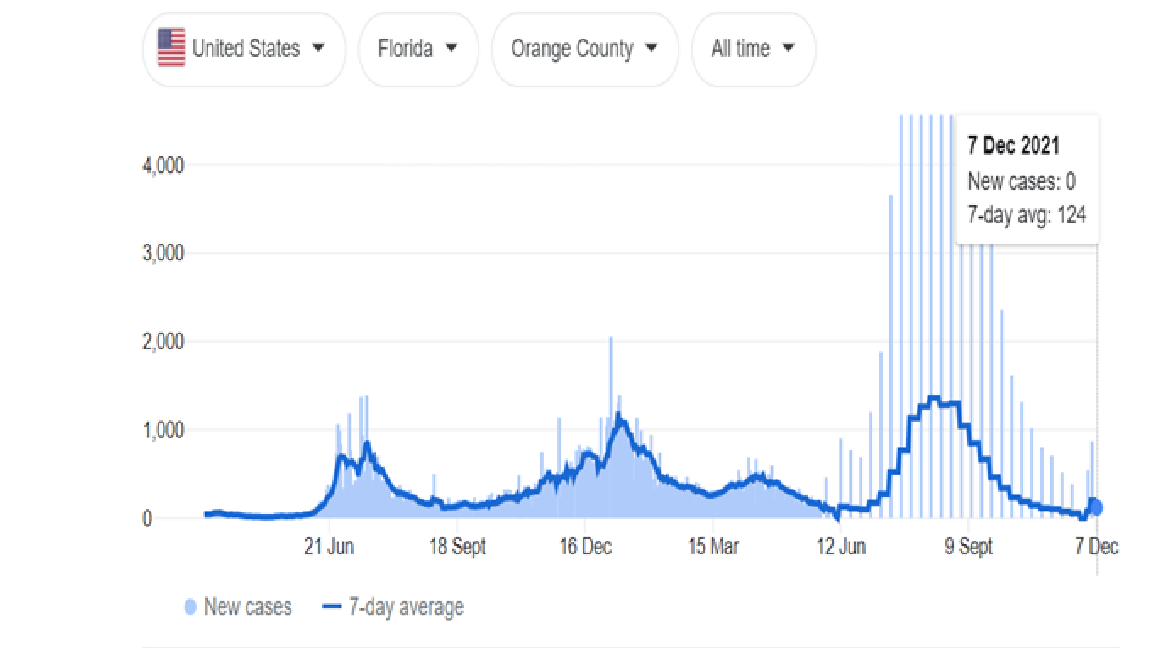 Even with the arrival of yet another viral variant, Omicron, there is a growing belief that tourism can be boosted quite quickly in 2022, and especially if there is a strong Christmas 2021 season for visitors.

Although Americans are more prepared to drive long distances to get to their destination than most other nationalities, air access domestically and internationally is crucial to the success of the attractions.

Weather that is typically better year-round in Florida, the Sunshine State (as it is also in California), than might be found for example at the Disneylands in Tokyo or Paris ensures that Florida attractions top the list for domestic and foreign tourists alike.

The region is served in the main by two commercial service airports: namely Orlando International, which was the US’s 10th busiest airport in 2019, with 50.6 million passengers, and the much smaller Orlando Sanford (3.3 million in 2019).

The former is operated by the Greater Orlando Aviation Authority and the latter by France’s VINCI Airports under concession from the Sanford Airport Authority.

Sanford believes it can again be attractive to the airline industry

The focus here is on Orlando Sanford.

Earlier this year Orlando Sanford International Airport CEO Tom Nolan said the airport's "attractiveness to the entire airline industry" had increased as a result of the coronavirus pandemic, due to its mix of being cost efficient for airlines while offering "all the facilities and instrument landing systems necessary" for operation.

Mr Nolan also said that the airport had opened dialogue with international and domestic airlines about potentially operating from the airport, stating that the airport's status as reliant on leisure travel would "result in a more expeditious recovery".

That, of course, depends on the strength of that recovery.

A history of strong traffic growth

Traffic growth at Sanford has been historically strong throughout the period of its private sector management and it can be regarded as a shining light for this moderate form of privatisation (note that it is not leased). Those private sector companies that have managed it under concession before VINCI are TBI (Abertis) and Airports Worldwide.

In contrast, the growth level over the same period at Orlando International averaged 4.3%. 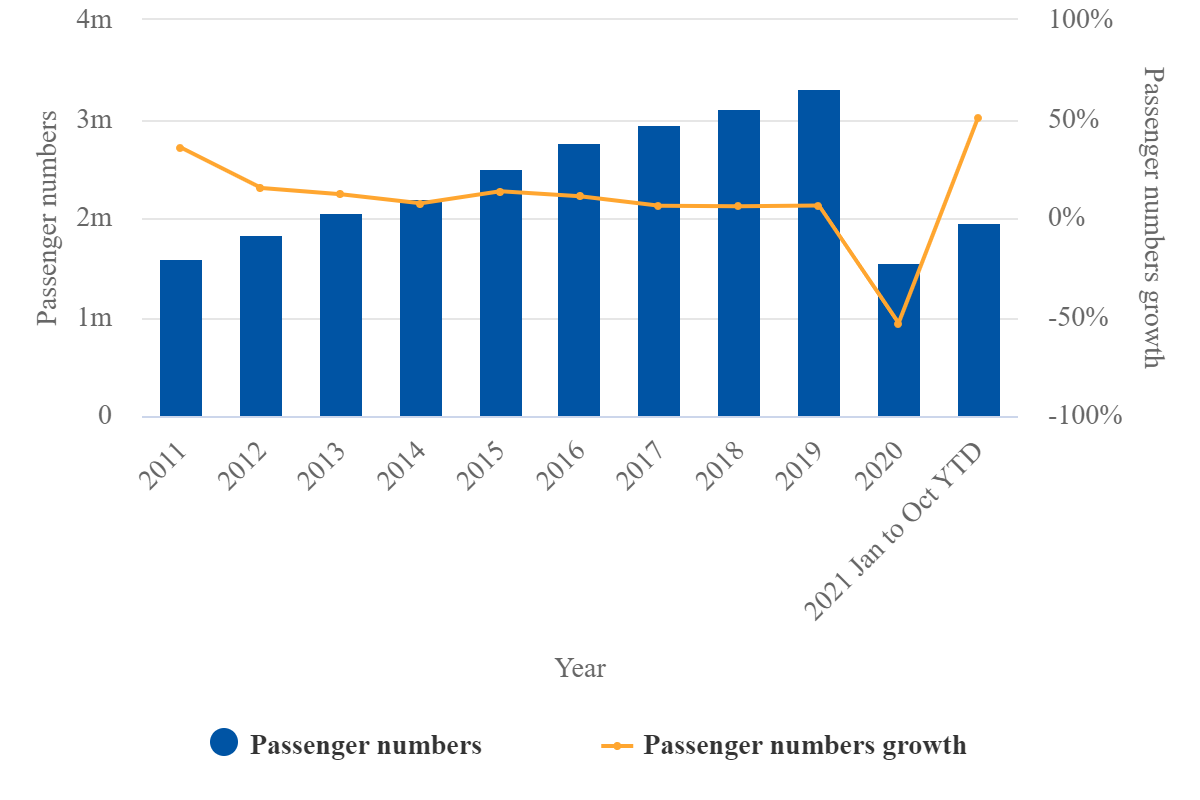 Along with what happened at just about every other airport, that traffic collapsed at Sanford in 2020, and by broadly the same percentage as at Orlando International (IATA code MCO).

It may be of some concern to the Sanford management that the recovery in traffic there in 2021 is 27 percentage points adrift of that of MCO, although the two reporting periods are slightly different; Jan-Oct in Sanford’s case and Jan-Sep for MCO.

Capacity at Sanford has been broadly in line with 2019's

The provision of seat capacity at both airports is influenced by seasonality, but more so at Sanford as a result of its outright orientation towards leisure traffic.

It may be useful to compare the capacity charts for both airports. 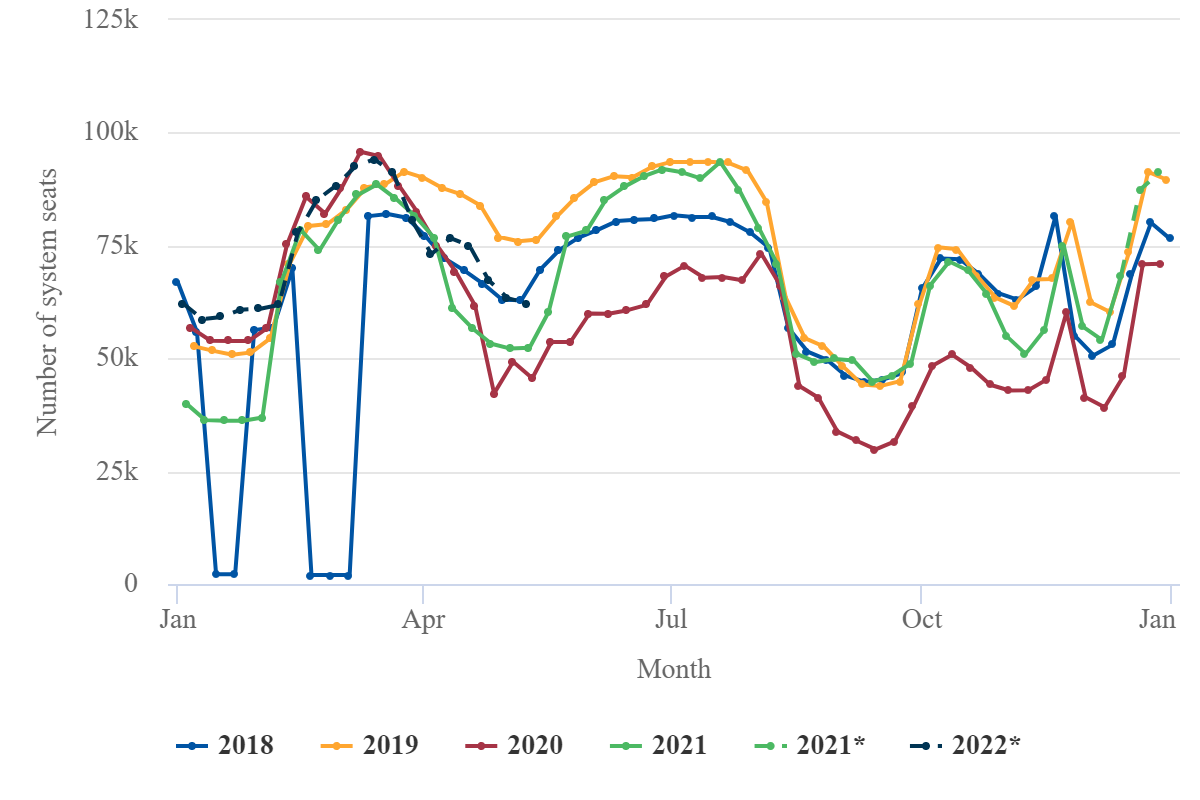 * These values are at least partly predictive up to 6 months from 06-Dec-2021 and may be subject to change. 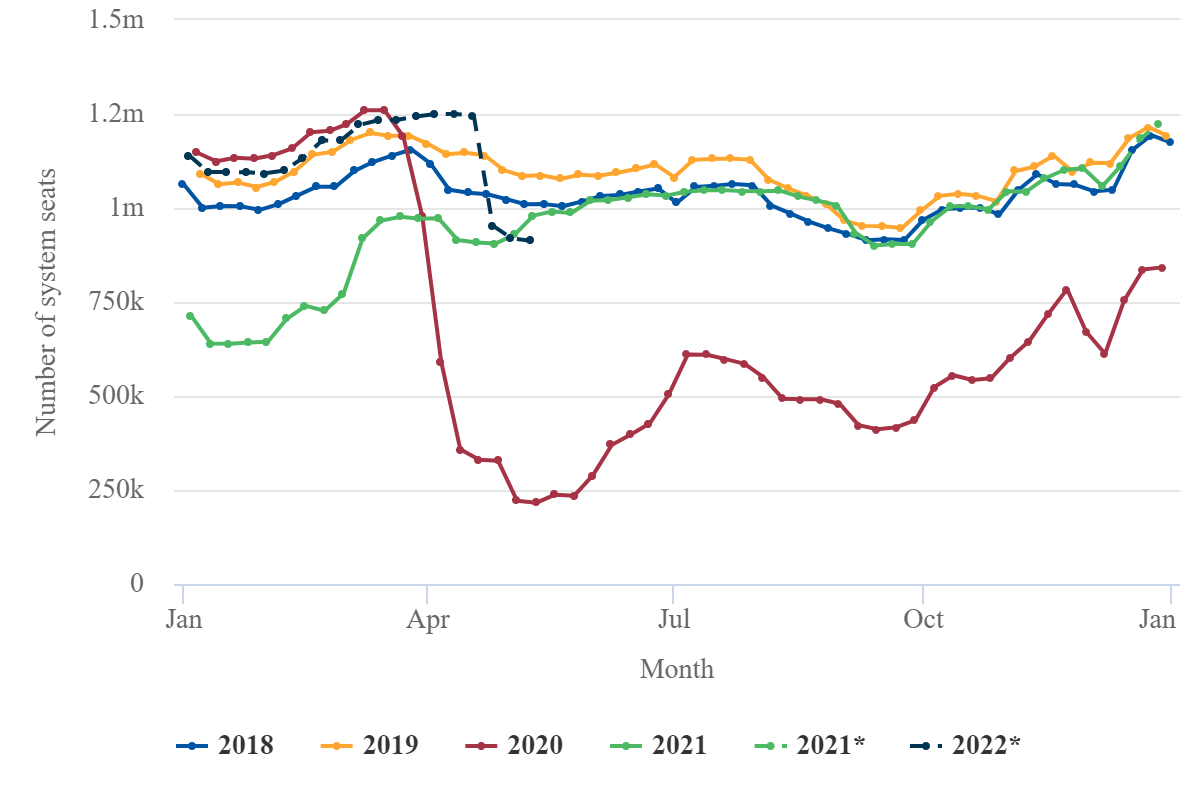 * These values are at least partly predictive up to 6 months from 06-Dec-2021 and may be subject to change.

Sanford’s chart is notable in that capacity provision in 2021, and to a lesser degree in 2020, followed the same pattern as in 2019, which is unusual.

In the case of MCO, there is less seasonality as the airport serves business (including MICE) traffic, as well as VFR, in addition to tourism. There was a far greater degradation of capacity in 2020, but in 2021 MCO has returned almost to parity with 2021 in the week commencing 13-Dec-2021.

International capacity is limited to Canada

Despite claims about opening dialogue with international carriers at Sanford, that dialogue has yet to achieve any material result, although it could be argued that such arrangements take time in these particular circumstances.

As of the week commencing 06-Dec-2021, international seat capacity at Sanford stood at 3.5% compared to 14.5% at MCO. That 3.5% is limited to North America (i.e. including Canada); there is no capacity from or to Latin America, or Europe.

That has not been the case in the past. Airlines that have used Sanford include two UK-based ones which succumbed to financial pressures, namely Monarch Airlines and Thomas Cook Airlines. The former went bust in 2015, and Thomas Cook had already shifted its services to MCO before it ceased all operations in 2019.

Icelandair also operated to Sanford before moving to MCO in 2015. Icelandair operated a regular scheduled service connecting Sanford to its network of European airports via Keflavik Airport in Iceland, and that was quite a departure from the airport’s usual modus operandi internationally.

But in 2019 TUI Airways announced that, from 2022 it would switch its Orlando operations from Sanford to Melbourne (FL), including daily flights to/from eight British airports, thus bringing operations nearer to Port Canaveral where TUI Cruises will operate from in coming years.

As a package holiday company this brings passengers closer to their cruise departure point (although at the same time angering TUI passengers, who fly with the company to visit Orlando for Walt Disney World and other such resorts).

One airline – a ULCC, Allegiant – dominates

Sanford is heavily used by LCCs, which account for 100% of capacity in the same week, compared to 60% at MCO.

It is mainly one LCC, or rather ULCC, Allegiant Air, which has 96.5% of the capacity. Interestingly, in 2010, Allegiant Air announced that it was moving many flights to the larger and more centrally located MCO in order to compete with AirTran Airways. Owing to passenger feedback, all flights returned to Sanford.

Apart from Allegiant, the other airlines at Sanford presently are the Canadian LCC Flair Airlines which, in Jul-2021, announced that it would launch service between Sanford and five Canadian destinations, beginning in winter 2021. Also Swoop, the Canadian ULCC headquartered in Calgary that is a venture by WestJet, a response to growing competition in the price-sensitive market. Between them Flair and Swoop have just 3.5% of the market at Sanford.

With almost all the capacity provided by one ultra-low cost carrier, it goes without saying that there is zero presence from both full service/network airlines and their alliances.

MCO is not particularly well served by alliance member airlines either, but the total capacity of those airlines adds up to 37.6% of the total – less than half of that at airports like New York JFK or Los Angeles International.

Lack of connections to major centres of population

One evident downside to Allegiant’s dominance, together with the lack of full service carriers, is that there is hardly any route activity to speak of which connects Sanford to major US city conurbations, simply because Allegiant’s business model eschews such routes in favour of secondary and tertiary level airports serving smaller townships or the fringes of metropolitan areas. 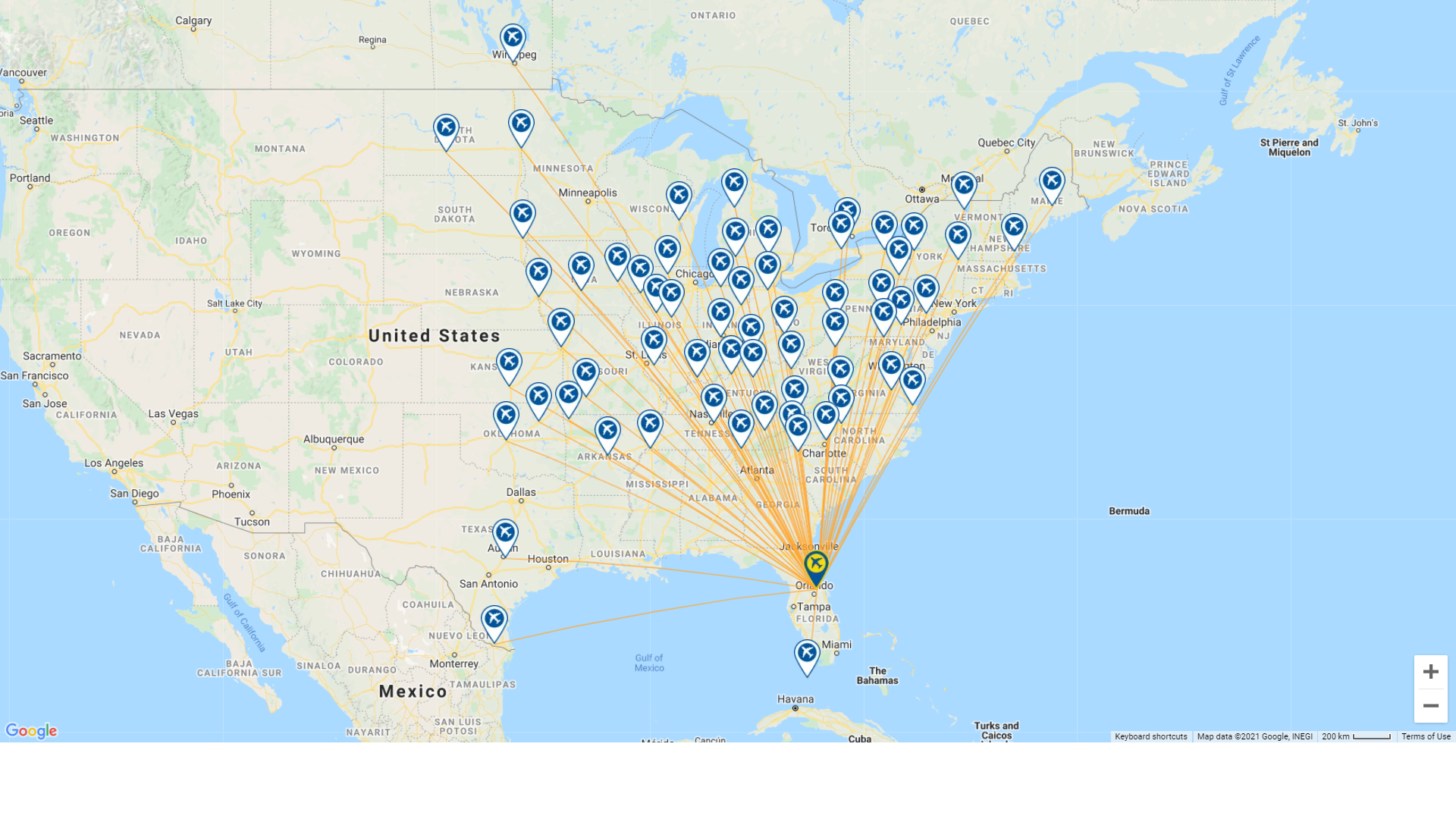 Moreover, all the routes operated in the US are in the eastern half of the country. Allegiant’s network largely precludes coast to coast flights.

There is no cargo activity of note.

Utilisation of the airport varies widely by day.

When that level of activity is replicated on a daily basis, Sanford will feel more comfortable that it is engaged in a revival. 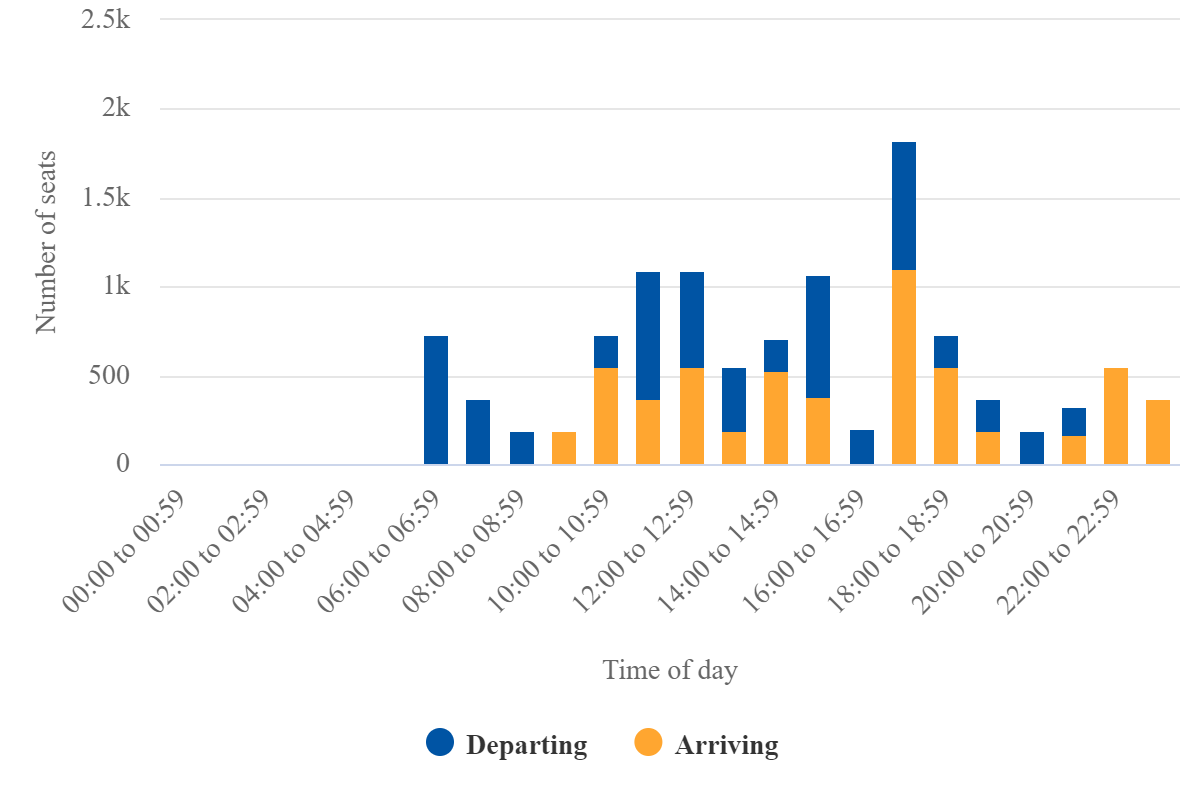 In summary, it is easy to dismiss Sanford as an airport that is dominated by a single ULCC, has zero full service capacity, has no foreign routes outside North America, and has probably seen its best days.

But in promoting its cost effectiveness the management may have identified its saving grace. As the pandemic persists and now looks likely to do so throughout the forthcoming year, airlines will have to be given more leeway to operate or their existence will come into question. Governments know that, and that they cannot be responsible for more bad news that will count against them in elections.

So once the current panic over Omicron has abated, there will be opportunities arising for airlines to start or reopen services to the regions that offer escapism.

There is no doubt where the Orlando area lies on that scale.

Technically Sanford, previously a naval air station, can offer three runways that can handle jet aircraft, one of them being 3300m long. A USD100 million terminal expansion project is almost complete.

Current data on landing charges at Sanford is not available, so it is not possible to compare it directly with MCO for ‘cost effectiveness’ in that respect.

But Sanford's competitor MCO’s charges are not high

What can be said for sure is that MCO itself is not an expensive airport by comparison with those in large cities across the US.

As the chart below shows, using data from 2020, for larger aircraft in particular MCO has almost the lowest rates in a clutch of major airports on the east and west coasts, the Midwest and the south. 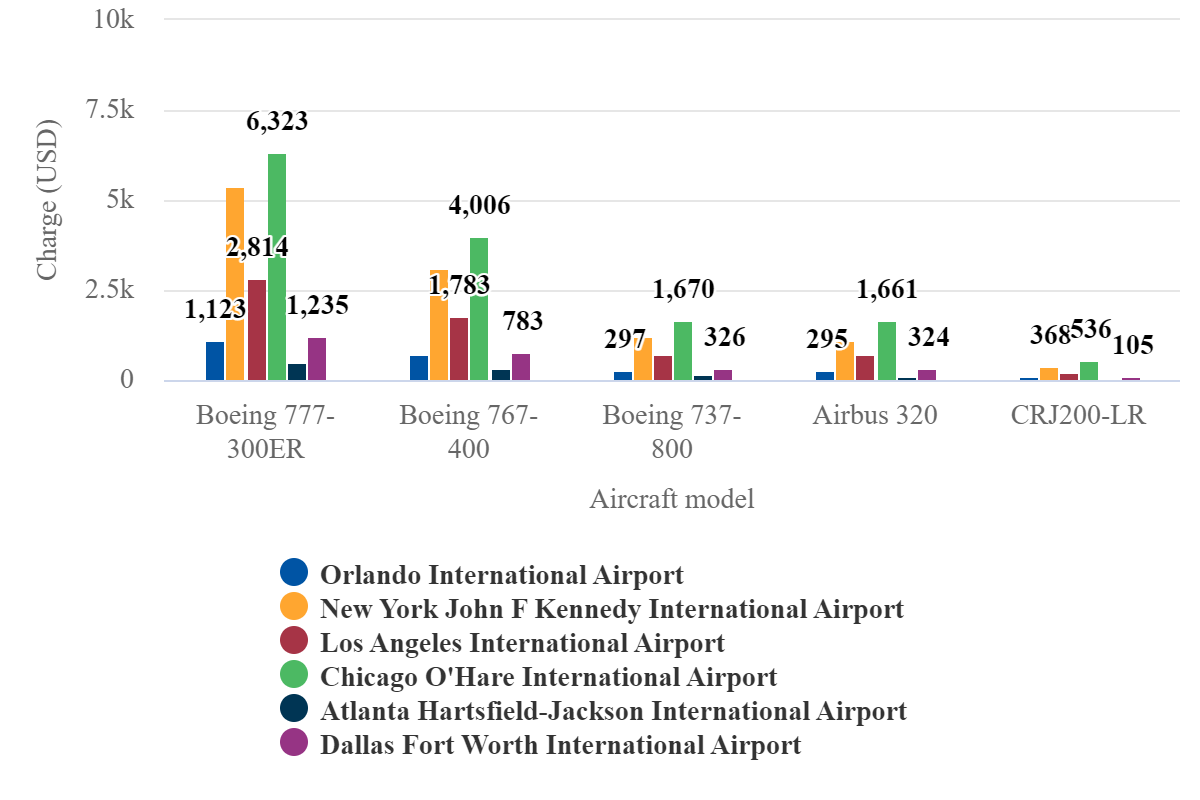 If Sanford is able to undercut those rates significantly while offering a sufficiently aesthetic experience compared to MCO – an airport which is admired widely – and while being able to convince new operators of its proximity to attractions across central Florida, then it can achieve the expeditious recovery it craves.

It is not ‘the impossible dream’. Across the US there are examples of small airports that have established a niche in their area: for example, Ontario Airport in California, which has thrived since it broke away from Los Angeles World Airports, with a focus on freight activities and passenger flights that are appropriate to what is one of the US’ major logistics and distribution centres.