Mexican stocks closed 0.3% higher Thursday, on volume of 143.4 million shares worth USD302 million, in line with modest gains in US markets, as concerns over the health of European banks curbed the impact of better-than-expected jobs data and encouraging trade results in the US.

Mexico’s Grupo Aeroportuario del Centro Norte (OMA) led the gains in worldwide airport stocks yesterday, gaining 3.8%, as the carrier reported a 5.2% increase in passenger numbers at its 13 airports for Aug-2010, to 1.1 million. Domestic passenger numbers increased 4.2% to 933,857 while international traffic was up by double digits (+11.7% to 148,232).

OMA commented: “There were a number of events during the month related to the airlines Mexicana de Aviación, Click Mexicana, and Mexicana Link, which make up Grupo Mexicana. The negative effect on traffic resulting from the bankruptcy filing by Mexicana de Aviación on 03-Aug-2010 and the suspension of operations by all three airlines on August 28th was more than offset by the growth in traffic on other airlines and general aviation. Traffic carried by Grupo Mexicana airlines decreased by 64,853 passengers as compared to August 2009, while traffic carried by all others increased 118,202."

GAP stated it expects Mexicana’s closure to have an impact on its future traffic, with Mexicana previously transporting 18.3% of the airport operator's passengers. However, GAP added: "Nonetheless, it should be mentioned that different airlines have taken on the routes operated by Grupo Mexicana in the first days of September. In addition, various airlines have increased frequencies on different routes operated by Grupo Mexicana, such as the Guadalajara-Mexico City route."

Subsequently, on 08-Aug-2010, ASUR, estimated that the recent closure of Mexicana could cost the airport operator MXN132.5 million (USD10.2 million) during the third quarter. Mexicana, Aerovias Caribe and Mexicana Link (Grupo Mexicana), which operated in all of ASUR's airports with the exception of Tapachula, represented 10.9% of the company's revenues for the eight-month period ended Aug-2010, primarily from domestic passengers. The airport operator cautioned that it could guarantee that other airlines will be able to absorb the passenger traffic on routes previously served by Mexicana.

Mexicana’s parent company, Grupo Mexicana, on 07-Sep-2010 received creditor protection from a Mexican judge allowing the Communications and Transport Ministry to name an administrator for the carrier as well as an arbitrator in its restructuring process. The carrier, on 27-Aug-2010, announced that as a result of the group’s delicate financial situation when it changed owners the previous week, compounded by failure to reach agreements that would allow for the capitalisation of its three airlines, Mexicana Airlines, MexicanaClick and MexicanaLink flights would be suspended until further notice as 28-Aug-2010. 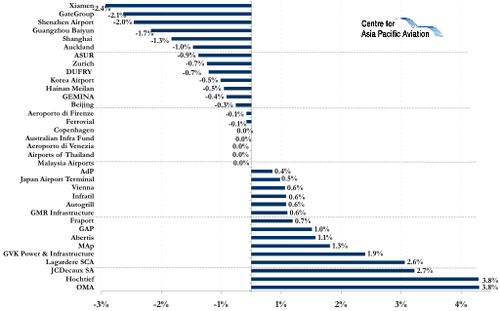