The collapse of Polish hybrid carrier OLT Express has had a negligible impact on the Polish market as only a few of the carrier’s approximately 20 routes have been picked up by others. While LOT Polish Airlines regional subsidiary Eurolot has filled the void left by OLT Express in three domestic markets and is considering taking over a few more, more than half of OLT Express’ former routes have been left completely un-served. Interest in most of the axed routes is limited as the new carrier was ultimately unsuccessful in its attempt to stimulate demand on previously un-served point-to-point domestic routes which bypassed the main Polish hub of Warsaw.

OLT Express re-launched operations in Apr-2012, rebranding from Jet Air after being purchased by the Amber Gold Group. The Group also included OLT Express Poland, a separate carrier than OLT Express that caters to the charter market, and OLT Express Germany.

The strategy for the OLT Express scheduled operation was to take market share from LOT Polish Airlines at secondary cities in Poland which have traditionally been served through LOT’s Warsaw hub. OLT Express only operated four routes from Warsaw. On these four routes it competed directly with LOT but on nearly all of its other routes it did not have any competition and was offering a new non-stop option for passengers.

The airline initially launched with 17 domestic routes. The domestic operation, which had expanded to about 20 routes by Jul-2012, was to be followed by the launch of over 40 international routes in the winter 2012/2013 season. In addition to picking off traffic that was previously served by LOT via Warsaw, OLT Express sought to stimulate traffic by offering fares that were low enough to entice domestic rail passengers to switch to air transportation.

Just prior to the full suspension of its operations on 27-Jul-2012, OLT Express announced plans to withdraw its four ATR turboprops from its fleet, leaving it with two A319s and nine A320s. At the time Managing Director Jarosław Frankowski said the airline's parent company, Amber Gold, could not provide the carrier "with the same financing as before". The ATR withdrawal was to lead to the cancellation of 10 domestic routes from 11-Aug-2012 but it was followed a day later with the announcement of the suspension of all services.

On 09-Aug-2012 Amber Gold sold OLT Express Germany to Dutch aviation investor Panta Holdings, which also owns Dutch regional carrier Denim Air. Prior to the deal, OLT Express Germany managing director Joachim Klein said: “The situation of OLT Express has changed very quickly for the worse. We had originally planned to open up even the German market together, to unify our distribution systems and to benefit from marketing campaigns. This was the reason for the choice of a common brand name OLT Express.”

The exit of OLT Express from the Polish domestic market leaves Poland with only LOT Polish Airlines and its sister carrier Eurolot. The two carriers currently offer approximately 36,000 and 3,200 domestic seats per week, respectively, according to Innovata data.

A much larger impact could have been felt by OLT Express’ collapse if it had occurred following the start of the winter 2012/2013 season. The airline had planned to undertake a large international network expansion in winter with the launch of up to 42 routes including 17 from Warsaw Chopin, 13 from Gdansk, seven from Rzeszow and five from Lodz. These routes were to connect with western European destinations including Amsterdam, Dortmund, Hamburg, Memmingen, Oslo, Paris Orly and Rome Fiumicino.

While LOT and Eurolot now control 100% of Poland's domestic market, the group already faces intense competition in the international market particularly from LCCs. The LOT/Eurolot group currently accounts for about 23% of international capacity in Poland and about 29% of system-wide capacity. 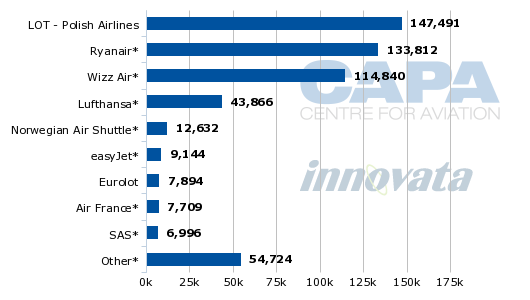 There was little immediate response from other carriers following OLT Express’ collapse. While LOT and Eurolot carried stranded passengers, there was no rush to pick up routes left vacant by the carrier’s collapse.

Eurolot in late Aug-2012 became the first (and thus far, only) carrier to pick up some of the routes left vacant by OLT Express, with the launch of Krakow-Szczecin and Krakow-Poznan services. The airline also has announced plans to launch Katowice-Gdansk service in early Sep-2012.

Eurolot CEO Mariusz Dąbrowski has said the airline is still evaluating the commercial viability of the other vacant routes left by OLT Express, particularly those from Poznań. Eurolot is better positioned than mainline LOT to absorb OLT Express routes as it operates smaller aircraft, ATR turboprops, than its parent. Eurolot also has its main bases at Krakow and Gdansk while almost all of LOT's operation is based at Warsaw.

While OLT Express’ collapse has left several domestic routes un-served, there is no meaningful gap in the Polish market considering these routes were only three to four months old and most were not previously operated by other carriers. The reported low load factors on the routes show the demand was not sufficient to sustain such services. Competing against LOT and Eurolot in Poland’s domestic market proved to be a daunting task as the two existing domestic carriers benefit from the feed provided by LOT’s international network.

While Eurolot is looking at picking up more former OLT Express routes beyond the initial three, it is unlikely it will launch a significant number given the lack of demand for air services between secondary Polish cities at this stage. The Eurolot/LOT group benefits more from OLT Express’ failure to survive long enough to expand into the international market, where it could have had a much bigger impact.

OLT Express had been operating since 2001, originally under the name of Jet Air. From late 2005 until mid-2007 the airline operated domestic services for LOT Polish Airlines on low-density routes. JetAir’s regional feeder partnership with LOT ended in 2007 and the carrier began to operate services under its own name. OLT Express’ sister carrier, OLT Express Poland, was a Polish charter operator which commenced operations in Apr-2011, serving regional Polish destinations on behalf of tour operators.