It may come as news to most readers, even in the US, that early in the 20th century Oakland was considered one of the nation’s premier airfields. None other than Charles Lindbergh called it the “most advanced” when he dedicated the field in 1927. Additionally, it was the first airport in the San Francisco area and though SFO dates to roughly the same time, Oakland was the airport until after WWII.

In 1927, the first flight across the Pacific left Oakland for Hawaii, a journey that involved far more open water than Lindbergh’s solo flight to Paris. It soon became the gateway airport for the Pacific. The first flight from the US to Australia—via Hawaii and Fiji—departed Oakland, as did Amelia Earhart on her famous journey that ended with her disappearance in 1937. In 1936 Pan Am clippers departed Oakland enroute to the Philippines. Oakland was a pioneer in other ways as well, being the first airport to have a hotel and restaurant on the field.

But the war intervened and all commercial service was terminated in 1943. When it was resumed in 1945, San Francisco emerged as “the place to be” with Oakland over time becoming the base for a number of scheduled charter carriers, including World Airways and TransAmerica.

The airport occupies roughly 2,600 acres on the eastern shore of San Francisco Bay. Like its larger western rival SFO, additional expansion is unlikely as the site is constrained by development to the East and water to the West. While it has 4 runways, commercial operations are generally limited to the 10,000 foot runway 11/29 that borders the Bay. It is owned and operated by the Port of Oakland and serves as a cargo hub for Fedex.

Oakland has had an interesting journey in the past 40 years, as depicted in the chart below. The years up until 1978 and US deregulation show modest traffic variations. During the 1980s, traffic grew slowly but erratically and by 1988, displayed a roughly 60% increase over the 1980 numbers. From early on, Oakland was seen as the alternative to SFO by emerging carriers. One of the first to appear following deregulation, PEOPLExpress, operated a B747 between Newark and Oakland. When Continental purchased the carrier, that service ended. 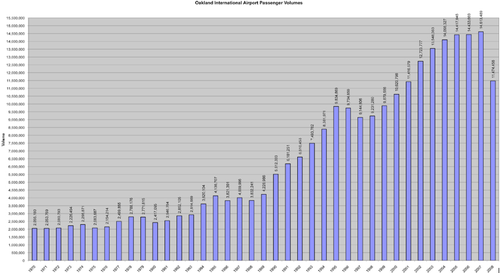 1)  The year saw the appearance of Southwest on the scene,

2)  The Loma Prieta earthquake in October closed the San Francisco-Oakland Bay Bridge and hugely increased the travel time necessary to cross the Bay to SFO.

While a destructive event for the region, it forced thousands to amend long-standing travel patterns and made this “discovery” of OAK concurrent with Southwest’s expansion.

The 1990s proved to be a period of rapid expansion as Southwest grew and the legacy carriers expanded service to/from numerous secondary airports across the country. Oakland not only offered a greatly expanded nonstop network, but also became known as the place where the best fares were likely to be found. 2000 brought JetBlue and transcontinental flights to the airport.

The arrival of JetBlue provided an interesting window into the legacy carrier dilemma. Once the newbie was established with service to JFK, American, being the dominant carrier between SFO and JFK, began to feel the competitive heat. Already flying from both San Francisco and San Jose to New York, AA opted to begin service from Oakland as well, but pricing that service at JetBlue fares.

Instead of destabilizing the JetBlue market, American soon found that it was cannibalizing its own flights by offering the identical product from OAK at half the price charged at SFO and SJC. The Oakland service was terminated and fares to New York not only fell at all three airports, but also became available at the new levels as one-way segment purchases.

And in that small vignette, played out at OAK, all the problems plaguing the legacy carriers at that time were visible. Twenty years later, the picture is far more muddled. San Francisco now has more LCCs than OAK and finding the “deal” requires more research. As an example, flying SFO to JFK on 15-Feb-2010 costs USD193 on American, United, Virgin America and JetBlue. But the real price leader is Delta, charging USD120. However, JetBlue from Oakland is priced at USD213. On the same date, lowest priced travel between SFO and LAX is USD60 (WN and VX), identical to the USD60 charged by WN at Oakland.

The good news and the bad news

Most noticeably, the numbers did not fall following the events of September 2001. By contrast, San Francisco experienced dramatic traffic declines even as Oakland grew. There were a number of factors that caused this phenomenon. The first was that by 2001 OAK had a very substantial reach and there were simply more options from which to choose. Second, the legacy carriers were all in very difficult economic straits while Southwest, Oakland’s primary operator, was enjoying boom times and overtaking the majors as the nation’s largest domestic operator.

Finally, the airport’s reputation for 'fair fares' made it a factor in far more purchase decisions and its accessibility to public transport via the BART system, actually made it a more convenient option for many travelers destined for downtown San Francisco.

Despite the events of the past decade, Oakland remains the only Bay Area airport in 2009 whose traffic numbers exceeded those of 2001.

But high fuel prices, escalating fares and a souring operating environment ended the party in 2008 as legacy carriers retreated to primary airports and even the low cost players limited growth and/or contracted.

However, 2009 would make 2008 look good by comparison, as all of the legacy carriers deserted and retrenched at SFO. But for two flights to Denver, United was gone. Delta and US Airways now offer service only to Salt Lake City and Phoenix and for Delta, that is primarily operated by CRJs. On routes up and down the West Coast, Southwest holds a virtual monopoly.

The effect on the airport has been that an aggressive terminal expansion program has been truncated and other capital expenditures deferred.

But while the outlook at the present seems muted, the long term perspective is much more hopeful.

First, as reported in the first of this US airport series, SFO has a number of operational and expansion limits that threaten to cause massive delays if additional traffic is not diverted to the other two regional airports.

Second, insofar as population will continue to increase in the region, that growth must be to the east and south, making OAK the nearest logical choice for this expanding consumer base.

Finally, the fact that AirAsia's Tony Fernandes has one of his A340s painted in an Oakland Raiders (American football team) logo scheme, and that the aircraft has done a proving run to the airport, is a strong indication that OAK may have a future as the nexus for low-cost, long-haul travel across the Pacific - kind of a back to the future event.

Even more interesting is the following recent release from the airport. As a place known for the past decades as the local “low cost airport”, the statement reveals that that fact is not necessarily linked with low yield for its operators.

"With regard to Bay Area comparative revenue in carrier common markets (carriers such as Southwest, for example, that fly OAK-LAX and SFO-LAX), we see in the DOT filings through the 3Q09 a trend of over a year wherein flights originating from OAK provide a revenue premium to the carrier vs. flights to the same market from SFO. In fact, there are 17 of these common markets, domestic and international, and in 11 of them, the OAK RASM is higher than SFO. In the remaining 6 we see that the margin of difference is narrowing. When you factor in the lower carrier CPE (airport cost per enplanement) and a better chance that a carrier will operate on schedule, we think this creates a winning combination for long term air carrier profitability in the region."