Norwegian (+9.8%), Cimber Sterling (+4.6) and Virgin Blue (+4.5) were the strongest gainers on Friday, on a day’s trade which saw most major international indices strengthen. Major markets were buoyed by encouraging job growth figures out of the US, where the Dow closed at fresh two-year highs.

CEO, Bjørn Kjos, stated, ”we are very satisfied with yet another month with strong passenger growth. We managed to increase the load factor, despite larger aircraft and 1,700 more departures than the same month previous years.”

Despite the poor results on the yield front, the stock closed at two-month highs of NOK98.50. Norway’s OBX Index lost 0.2%.

Also in the Nordic region, Denmark’s Cimber Sterling finished up 4.6% on Friday.

Virgin Blue gained 4.5% in Sydney, as rival Qantas was hit with a wave of poor press and questions of safety on Friday following two mid-air engine failures last week.

Also of benefit to Virgin, the Australian dollar continued its surge and passed parity with the US dollar last week. The Aussie currently buys USD1.0113.

Jazeera (+2.0%) gained on Friday ahead of its operational performance release over the weekend. The Kuwaiti LCC announced it has a leading market share among all Kuwaiti airlines on the majority of the routes it serves, with the exception of Jeddah and Riyadh.

While major European indices gained on Friday, peripheral markets, including Ireland and Spain, posted sharp losses, with banking sectors coming under selling pressure. The Bank of Spain on Friday stated the economy stagnated in the third quarter. 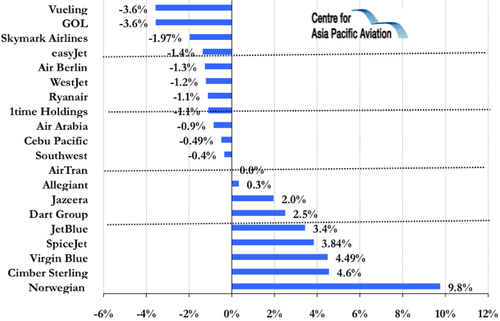