Norwegian Air Shuttle reported its third fall in quarterly profits this year, with the seasonally strong 3Q2014 seeing a 14% drop in its net result. It has been an unusual year. Additional costs associated with the introduction of its 787 fleet on its nascent long-haul network, delays to its US foreign carrier permit application and currency movements have weighed on this year's profits.

But Norwegian cannot blame these factors entirely. It has also experienced heavy falls in unit revenue in 2014, not entirely unrelated to its very rapid capacity expansion. Unit cost has declined too, but not fast enough. Pioneering a new business model on long-haul and growing very rapidly certainly provide challenges.

Norwegian's 2013 profits were lower than in 2012 and it now looks certain to make a significant loss in 2014. In 2015, it is planning much slower growth, which should be beneficial to unit revenue. It must also silence its detractors by proving that it can generate a more favourable profit trend next year, while also managing its new aircraft leasing subsidiary.

Nevertheless, the operating result excluding other gains/losses has deteriorated year on year every quarter in 2014 and the 9M result for this measure was a loss of NOK387 million (EUR47 million), versus a profit of NOK708 million (EUR92 million) last year. Net debt at the end of Sep-2014 more than doubled from a year earlier to NOK7.6 billion (EUR920 million) as operating cash flow deteriorated and aircraft-related capital expenditure increased.

The extent of the deterioration in the adjusted operating profit figure in 3Q2014 was less than in the first two quarters of the year. With 4Q typically a weak quarter, and often loss-making, the outlook for FY2014 is for a substantial operating loss.

Growth in RPKs, at 41% in 3Q2014, was significantly ahead of the 17% growth in passenger numbers. This reflects the expansion of Norwegian's long-haul network as average sector length was up by 14%. 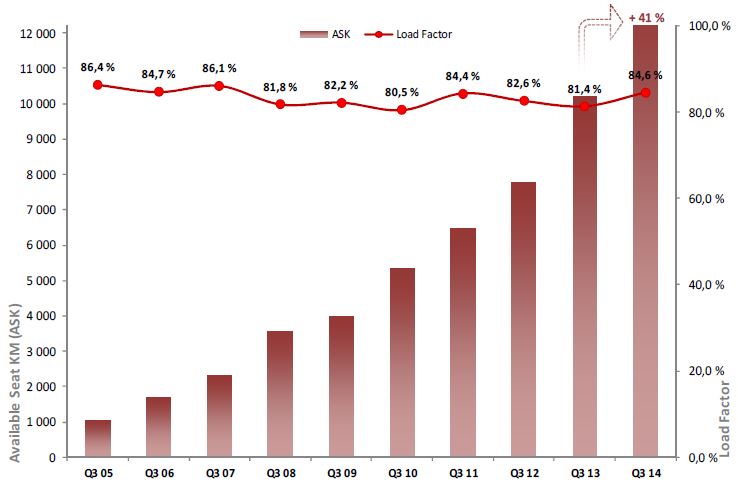 Revenues increased by 29.9% in 3Q2014, slower than the increase in ASKs, but faster than the growth in passenger numbers as a result of the increased average sector length. Passenger revenue growth was slower still, at 26.3%, but ancillary revenues jumped by 60.5%.

Ancillary revenue per passenger grew by 37% to NOK124 (EUR15 million), with the bundling of products and services accounting for the increase. This in turn reflects the growth of Norwegian's long-haul activities, where passengers are more willing to buy additional 'frills' at the time of booking.

By region, revenue growth on international routes was 35.4%, while domestic revenues grew by 10.6%. This was the first quarter this year to see an increase in domestic revenues, which fell in 1H2014 although they had always increased prior to that.

Norwegian does not break out its traffic data by region and so we cannot calculate pricing trends on the domestic network versus the international network. But the improved domestic revenue performance in 3Q2014 suggest an easing of previous price weakness caused by competitor capacity growth.

Total revenue per ASK (RASK) fell by 4% year on year in 3Q2014 (down 10% for 9M2014) and passenger ticket revenue per ASK dropped 7%. The 14% increase in average sector length was a significant factor in the fall in RASK, since there is typically an inverse relationship between these two items.

We are unable to ascertain like for like unit revenue trends in the core short/medium-haul business, but the 11% increase in 3Q average revenue per passenger was less than the 14% increase in average sector length (and 21% increase in average trip length). This suggests that Norwegian is feeling price pressures as its capacity grows rapidly.

Operating costs up 34%, faster than revenue

Norwegian's 3Q2014 operating costs (excluding other gains/losses) increased by 34.3% year on year, just less than the increase in ASKs (but faster than growth in passenger numbers). Fuel costs were up by 42.4%, faster than capacity growth as a result of NOK weakness versus USD.

Non-fuel costs grew by 31.3%. Labour costs grew at the slower rate of 22%, a little below the 23% increase in average full time equivalent headcount as labour productivity improved due to a higher number of seats and longer average sector length. These factors also helped airport and air traffic control costs to grow at a slower rate than ASKs.

Handling charges grew by 42.8%, faster than ASK growth as a result of NOK weakness against EUR and also larger aircraft. Maintenance costs were up by 43.5%, boosted by 787-related expenses and NOK weakness. Other expenses also grew rapidly, hit by costs related to irregularity in the long-haul start up operation and NOK weakness.

Total operating cost per ASK (CASK), excluding other gains/losses, fell by 1%. But this was less than the 4% reduction in RASK and this explains the drop in operating profit. For 9M2014, CASK fell by 1.7%.

RASK decline has eased through the year

RASK has fallen more than CASK every quarter this year so far. But, on a slightly more encouraging note, the gap between them has narrowed with each quarter. In particular, the decline in RASK has become less severe with each quarter (-17% in 1Q, -11% in 2Q and -4% in 3Q).

The increase in average sector length has been more consistent through the year and so is not the cause of this RASK pattern. It would seem that, perhaps, the pricing environment is becoming less negative for Norwegian.

In terms of the 2014 full year outlook, Norwegian has once again lowered its ASK growth plan. It now expects ASK growth of 35%. In releasing its 1H2014 results it adjusted its ASK growth projection for the full year from 40% to "in excess of 35%". The 35% increase in ASKs now expected is still a high rate of growth, but clearly the weak unit revenue environment is having an impact on management's growth plans.

Norwegian's 9M2014 operating loss of NOK387 million (EUR47 million) excluding other gains/losses represents a very heavy fall from the profit of NOK708 million (EUR92 million) in the same period of 2013. Norwegian says that its results have been adversely affected by factors such as costs associated with what it calls "irregularity" in the long-haul network launch, in addition to currency fluctuations and industrial action.

In 3Q2014, for example, it cites costs of NOK74 million in connection with long-haul, NOK63 million due to the delay in receiving US approval for its Irish subsidiary's application for a foreign carrier permit, NOK129 million (EUR16 million) in currency movements and NOK53 million (EUR6 million) in hedging losses.

Currency fluctuations are a fact of life for all businesses and must be swallowed. The long-haul irregularity costs and the costs of industrial action can be considered to be one-off in nature and not representative of the underlying performance of the business. They can also be considered to be consequences of strategic decisions taken by Norwegian over the development of the business and so should also just be taken on the chin.

Nevertheless, even if we treat the costs of industrial action, US delays and long-haul irregularity as exceptional, these total NOK417 million (EUR50 million) in 9M2014 versus NOK171 million (EUR22 million) in 9M2013. Adding these one-off costs back, the impact on 9M CASK is to increase the year on year decline from 1.7% to 2.9% (compared with a 9M RASK fall of 9.9%). The operating result (excluding other gains/losses) for 9M2014 would then be a small profit of NOK30 million (EUR4 million), but this is still NOK848 million (EUR102 million) below the equivalent figure for 9M2013.

The point is that Norwegian cannot hide behind exceptional costs to defend against poor financial performance. The real problem has been weak unit revenues without sufficient reduction in unit costs to compensate. A significant operating loss for 2014 is now inevitable. 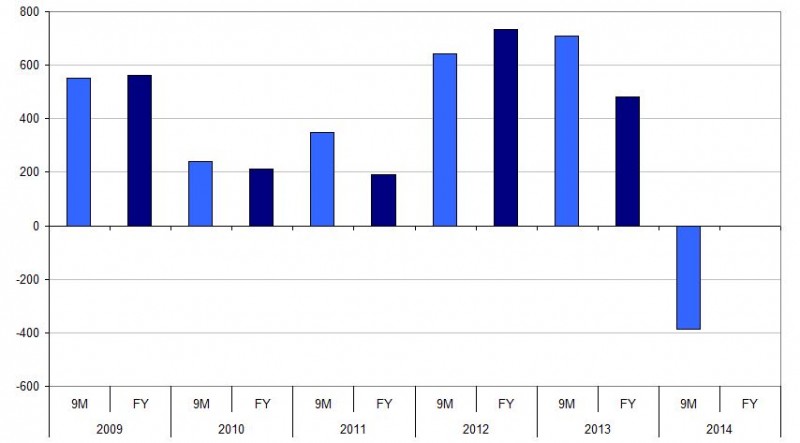 Norwegian's Irish leasing subsidiary Arctic Aviation Assets has commenced its activities. Created to lease into the market surplus aircraft ordered by Norwegian, but not needed for its own growth plans, it offers Norwegian the opportunity to participate in an activity that is typically more profitable than aircraft operations.

CEO Bjorn Kjos is confident in the expansion of its leasing subsidiary. "I am very confident that there aren't many leasing companies in the world that have a better purchase price than us", he said, adding that aircraft leasing companies have earned "all the money the airlines should have earned" over the past 10 years (Reuters, 22-Oct-2014).

As CAPA has commented previously, aircraft leasing may be more profitable than the airline industry, but it is a different business and adds to the management challenges faced by Norwegian. Finding suitable customers for Norwegian's order book, rather than a portfolio of aircraft judged to reflect broader market requirements, and placing the aircraft profitably are examples of the additional challenges.

2015 will be a crucial year in Norwegian's story

Norwegian now plans ASK growth of just 5% in 2015, with short-haul up 2% and long-haul up 25%. It had not previously given ASK guidance for 2015, but the overall growth is not inconsistent with its fleet plan.

The year end fleet is planned to increase by just five aircraft from 95 in 2014 to 99 in 2015, with the 787 fleet up from seven to eight. The growth rate in 2015 will be lower than the 10% to 15% rate that CEO Bjorn Kjos has previously suggested is appropriate in the medium term.

A number of factors should work in favour of better efficiency and financial performance in 2015. These include the greater maturity of Norwegian's new London Gatwick and Spanish bases and its long-haul routes, better utilisation of the 787 fleet and the phase out of the last Boeing 737-300s in favour of 737-800s.

It should also know definitively whether or not Norwegian Air International will receive its US foreign carrier permit (the European Commission supports the application and is seeking an urgent meeting with the US Department of Transportation to discuss the matter). This permit should also allow for greater labour productivity in its long-haul operations.

Norwegian is aiming for a 2015 CASK in the range NOK0.39 to NOK0.40, a reduction of 2% to 5% relative to its new 2014 target. This is not an aggressive CASK reduction target and suggests that it must do much better on RASK in 2015 than it has managed in 2014 if it is to improve its operating profit.

Certainly, 2015 will be a crucial year in Norwegian's story. It will reveal whether or not the trend of falling profitability, prompted by its strategic decision to expand onto long-haul, can be reversed.