Nok Air and Thai AirAsia remained profitable and were able to continue their rapid growth trajectory in 1Q2014 despite difficult market conditions in Thailand. But both low-cost carriers have been impacted by the ongoing civil unrest in Bangkok and intensifying competition as profits dropped significantly.

The Dec-2013 launch of Thai Lion Air and the upcoming launch of Thai VietJet will result in four LCCs competing in a domestic market which continues to grow rapidly but is suffering from over-capacity. With their 10-year head starts, Nok and Thai AirAsia enjoy an important first mover advantage and their continued relatively strong financial performance even in the most challenging of conditions shows they have the muscle to withstand any prolonged battle.

Meanwhile competition between Nok and AirAsia is increasing as both groups launch Bangkok-based long-haul low-cost affiliates. Their establishment of widebody operations well as Thai AirAsia’s expected expansion into the regional sector, where Nok already plays, results in an interesting dynamic.

Nok Air and Thai AirAsia (TAA) both launched operations in 2004, providing new LCC options in Thailand’s domestic market. Nok is an affiliate of Thai Airways, which currently owns about a 40% stake, while TAA is an affiliate of Malaysia-listed AirAsia Berhad, which currently has a 45% stake. TAA’s parent and majority shareholder Asia Aviation had an initial public offering on the Stock Exchange of Thailand in 2012 while Nok completed an IPO in Thailand in 2013.

Nok is predominantly a domestic carrier and currently operates only one international route, from Bangkok to Yangon. TAA is roughly the same size of Nok domestically but also has a large international operation that accounted for 35% of its total passengers in 1Q2014.

Revenue growth, however, lagged the growth in passenger numbers as both airlines had to lower fares to stimulate demand. Both carriers also saw load factor drop, an indication of over-capacity.

Nok’s passenger revenues were up only 9% while total revenues rose 11% despite the 23% increase in passenger numbers. The airline’s yield was down 8% while unit revenue was down 14% year over year. Average fare was down by 12% to THB1,630 (USD49.88).

Meanwhile costs grew by 29%, partially due to the depreciation of the Thai Baht, which declined by about 10% year over year. As Nok is predominantly a domestic carrier, nearly all its revenues are in Thai Baht while most of its main costs are in US dollars.

As a result Nok’s net profit narrowed by 90% from THB416 million (USD14 million) in 1Q2013 to only THB41 million (USD1) million in 1Q2014. While the sharp drop in profit is somewhat alarming the carrier’s ability to remain in the black (or roughly break even) given the challenging market conditions is noteworthy. Its sister carrier Thai Airways is expected to report a large loss for 2Q2014 when the flag carrier reports earnings later this month. 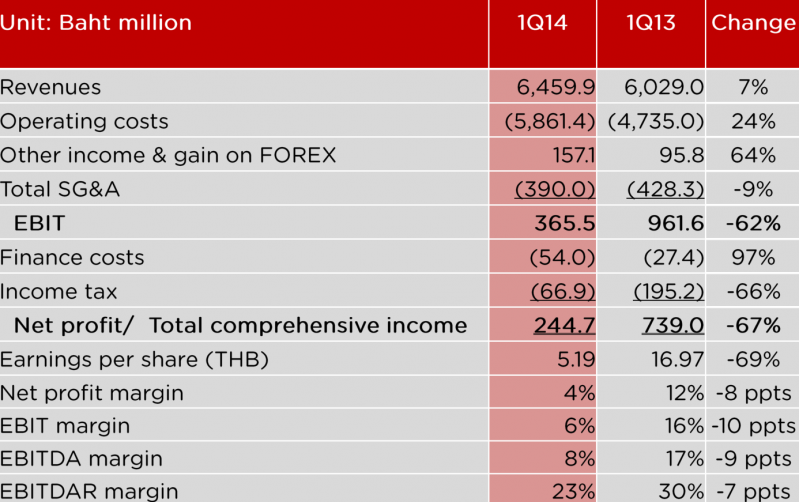 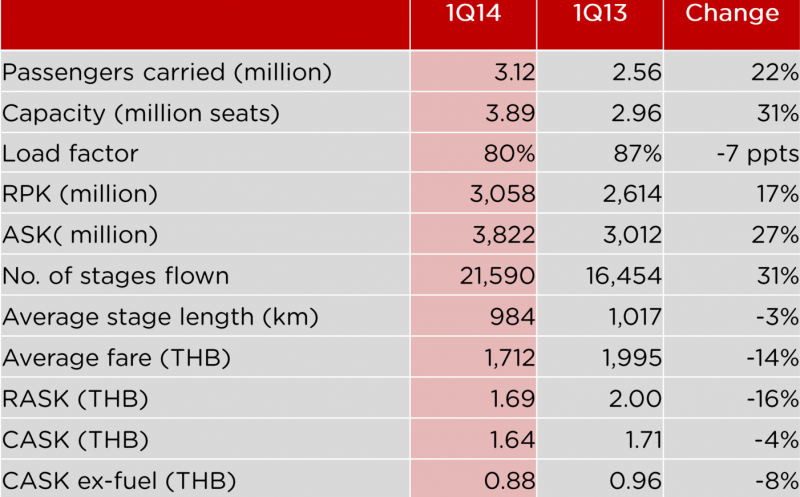 TAA’s ability to maintain profitability is particularly noteworthy as the carrier has significant exposure to the regional international market, which has been impacted most by the civil unrest in Bangkok. 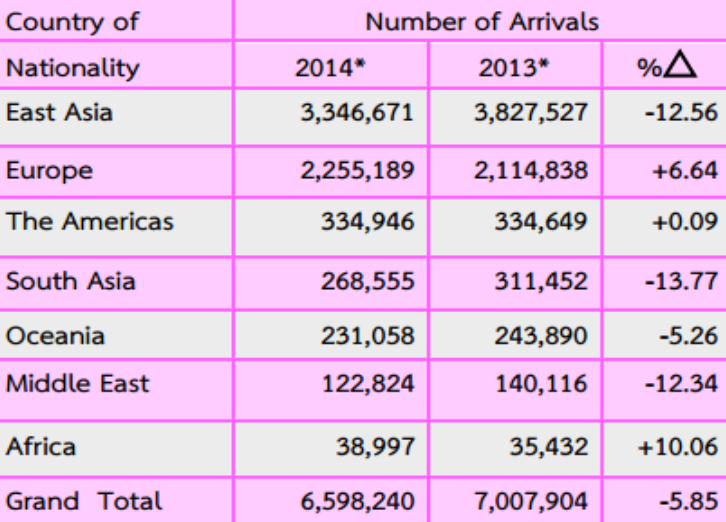 Thai AirAsia continues its international expansion with focus outside Bangkok

TAA pointed out in its 1Q2014 analyst briefing that tourist arrivals at Chiang Mai increased by 73% year over year, driven by these two new routes. The carrier has been looking at adding more routes to mainland China from Chiang Mai as well as launching services to China from Krabi, where it currently only operates services to domestic destinations and Singapore.

The new international routes from Chiang Mai and Krabi are expected to connect existing Chinese destinations that are already served from Bangkok. But the carrier also plans to add two to three totally new destinations to its international network in 2014.

Changsha, which is now served only from Bangkok, was launched in Jan-2014. Other new destinations for Bangkok are now being evaluated in southern China and Southeast Asia.

Mainland China is a key market for TAA, accounting for about a quarter of its total international seat capacity, according to CAPA and OAG data. While Chinese visitor numbers are down sharply, TAA sees growth in China as part of a long-term strategy and will therefore continue to expand in the Thailand-China market despite the short-term challenges. The expansion to southern China will involve a combination of more services to its hub in Bangkok, where domestic connections are available and being heavily promoted to Chinese tourists seeking to avoid the capital, along with new point to point routes from northern and southern Thailand.

In addition to the three new routes (Bangkok-Changsha, Chiang Mai-Hong Kong and Chiang Mai-Hangzhou) that were launched in 1Q2014, TAA added capacity during the quarter from Bangkok to Chiang Rai (domestic), Siem Reap (Cambodia) and Yangon (Myanmar) as it took delivery of two additional A320s for a total of 37 aircraft.

Capacity on three domestic routes – Bangkok to Phuket, Khon Kaen and Surat Thani – is being added in 2Q2014 although this is being achieved by reducing capacity on some international routes including Yangon as TAA has no additional aircraft deliveries planned for 2Q2014. 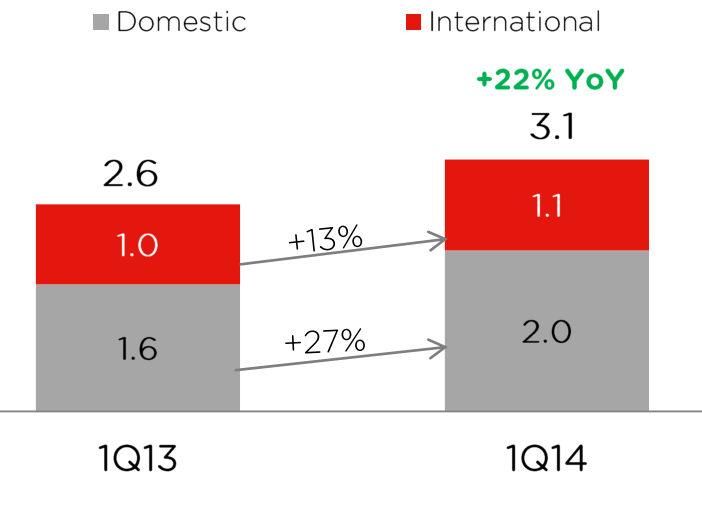 Note: *only includes the six airports owned by AoT: Bangkok Suvarnabhumi, Bangkok Don Mueang, Phuket, Chiang Mai, Hat Yai and Chiang Rai.
Chiang Rai has virtually no international traffic and is the ninth largest airport in Thailand overall. The other five are the five largest airports in Thailand.
Source: Airports of Thailand

TAA’s international expansion, with a focus on Southeast Asia and southern China, along with the launch of new long-haul LCC Thai AirAsia X (TAAX) is part of a broader attempt by the AirAsia Group to cement its leading position in Thailand’s international LCC sector as the market grows. While Thailand’s international market is currently struggling, there are huge opportunities to increase the LCC penetration rate beyond the 1Q2014 rate of approximately 20%.

TAA is keen to expand in the regional international market before Nok or the two start-ups, Thai Lion Air and Thai VietJet, make a move.

Meanwhile TAAX, which is owned by Malaysia-listed AirAsia X Berhad and local investors including the main shareholder in TAA parent Asia Aviation, is keen to quickly develop the Thailand-North Asia market ahead of NokScoot. TAAX launched charter operations in Apr-2014 with flights to Tokyo Narita and plans to begin scheduled operations in Jun-2014 with flights to Seoul Incheon. Bangkok-Narita flights are expected to be upgraded to scheduled services in 4Q2014, about the time NokScoot launches operations with Bangkok-Narita as its first route.

NokScoot, which is a joint venture between Nok and Singapore Airlines long-haul low-cost subsidiary Scoot, plans to launch services with two 777-200s while TAAX has an initial fleet of two A330-300s.

Thai AirAsia slows down fleet expansion for 2014 – but only slightly

TAA is adding four A320s to its fleet in 2H2014 for a total of 41 aircraft, some of which will be allocated to further international expansion.

The TAA fleet plan for 2H2014 represents a slight adjustment compared to the initial plan, which envisioned six additional aircraft for a total of 43. This adjustment is rationale given current market conditions.

Even with the adjustment, TAA is adding more aircraft in 2014 than its sister carriers in Malaysia and Indonesia, both of which have made bigger downward adjustments than TAA to their 2014 fleet plans. This indicates a decision by AirAsia to pursue more rapid growth in Thailand than its other core markets for strategic reasons, enabling the group to grow its market share despite increasing competition and challenging market conditions.

TAA is also growing more rapidly than Nok in the domestic market in 2014, reversing gains made by Nok in 2013. Nok briefly overtook TAA in mid-2013 as a larger domestic carrier based on passenger figures. But TAA accelerated domestic expansion in 4Q2013 and 1Q2014, allowing it to retake the lead as the largest domestic LCC.

With its 27% year over year growth in domestic passenger numbers for 1Q2014, TAA has been able to increase its share of the domestic market despite the increasing competition. Total domestic traffic across AoT’s portfolio of six airports increased by 12% in 1Q2014 to 9.6 million passengers, according to AoT data. LCCs accounted for the entire increase as domestic LCC passenger traffic across the AoT portfolio was up 22% to 5.5 million.

While the traffic gains are impressive they have come at the expense of yields. The drop in load factors and yields at both Nok and TAA are a clear indication of the over-capacity in the domestic market.

The over-capacity issue could be viewed as temporary as the instability in Bangkok had some impact, resulting in the slower domestic growth rate overall compared to 2013. Demand for local domestic travel waned during certain periods as a result of the protests.

Nok pointed out in its 1Q2014 results announcement that the political instability in Thailand “has led to the economic deceleration, consumption, and private sector investment.” The carrier pointed out that consumer spending for example was down 2.5% in Feb-2014 year over year, forcing it to discount fares during what is typically a peak period.

The drop in overall visitor numbers also has somewhat impacted domestic travel by foreigners although this was likely offset at least partially by a large number of visitors choosing to bypass Bangkok and connect straight away on domestic flights. (While regional airports in Thailand have seen a surge in visitor numbers, a majority of visitors still arrive in Bangkok where most international flights land.)

But even as local domestic demand starts to recover there is a risk of continued domestic over-capacity given the start-up activity and continued expansion by TAA and Nok, which are aggressively defending their share of the domestic LCC sector. Thai Lion is expected to add more domestic trunk routes over the remaining seven months of 2014 as it expand its 737-900 fleet from four to eight aircraft. Meanwhile, Thai VietJet is aiming to launch services in Sep-2014 and operate by the end of the year a mix of up to six international and domestic routes.

The competition is even spreading to the regional domestic market, which in the past has only been a strength of Nok Air. Nok has the largest domestic network in Thailand as it is able to serve smaller markets with its turboprop fleet.

But Nok’s regional operation has been set back by the termination of its partnership with Siam General Aviation (SGA), which had operated six Saab 340 turboprops until Mar-2014 under the Nok Mini sub-brand. Nok has taken over some of the former SGA routes using its own ATR 72 turboprop fleet, which will be replaced and expanded as four new Dash 8 Q400s are delivered starting in 2H2014, but has had to drop some smaller routes entirely.

TAA meanwhile has said it intends to launch its own regional operation, potentially by acquiring SGA.

New entrant Thai Lion also has started a regional operation with an initial fleet of only one ATR 72-600, despite previously not including turboprops or regional routes in its business plan.

The decision by TAA to expand into the regional market is unusual as AirAsia has previously insisted on a pure all-A320 model, but market conditions in Thailand dictate a different kind of approach. Being able to access smaller domestic markets will allow TAA to compete more effectively against Nok while providing additional feed to its regional international operation as well as to TAAX.

The rapid changes in Thailand’s LCC sector will undoubtedly usher in a dynamic period of rapid growth. But the growth and intensifying competition across all sectors means there is a risk of over-capacity.

TAA and Nok are not about to cede their first mover advantage to the upstarts. The reductions in profits for 1Q2014 are likely to continue for the full year. But all airlines concerned have the backing needed to withstand the looming battle beyond the immediate term.